Cathedral of the Annunciation (Moscow) 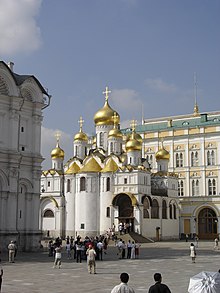 Cathedral of the Annunciation

Location in the Kremlin

The Annunciation Cathedral ( Russian Благовещенский собор / Blagoweschenski Sobor) is one of the three Orthodox cathedrals in the Kremlin in Moscow . It was built in 1489 and served as the house church of the Russian tsars for over a century .

The Annunciation Cathedral is located on the Kremlin's Cathedral Square, where the other two Kremlin cathedrals - the Dormition of the Virgin - and the Archangel Michael Cathedral - as well as the Ivan the Great bell tower and the Church of the Deposition of the Virgin Mary are also located .

The Cathedral of the Annunciation is located there on the southwest side of the square, where it is directly adjacent to the main building from the complex of the Great Kremlin Palace . To the right of the cathedral is the Facet Palace, which also belongs to the Great Kremlin Palace , while to the left of it the Cathedral Square ends on the street leading to the Borovitsky Gate.

Today's cathedral was built on the site of an older church of the same name, which in turn replaced a wooden church at the time. According to some traditions, the latter originated in 1291 and, according to Orthodox traditions, was dedicated to one of the church festivals, in this case the feast of the Annunciation . After the wooden church fell victim to one of the common fires in Moscow at the time, a stone church was built in its place. Only the year 1397 is known of this building as the date of its first mention, but it was probably built decades earlier under the Grand Duke Dmitri Donskoy .

After a renovation in 1416, the old cathedral existed for about 70 years until it fell into disrepair and was removed down to the base. The then Moscow Grand Duke Ivan III. For a large-scale renovation of the Kremlin, (the great) invited Italian architects, among others, to builders from the Russian city of Pskov . These began with the construction on the existing base in 1484 and five years later, in August 1489, the new Cathedral of the Annunciation was completed. It is possible that the Pskov builders of the Annunciation Cathedral were the same masters who had built the predecessor of today's Cathedral of the Assumption , which collapsed in 1472 .

Since the cathedral was directly adjacent to the then Grand Duke's apartments in the Kremlin (which stood roughly where today's Great Kremlin Palace can be found), the cathedral was chosen by the Grand Duke to be his house church, for which the Pskov masters have a direct stairway transition (some of which still exist today ) built from the cathedral to the palace. A number of icons from the old cathedral from the early 15th century found their place in the new building.

Initially, today's Cathedral of the Annunciation only had three domes. After it was badly damaged in another fire in 1547, the then Grand Duke and the first Russian Tsar Ivan IV (the Terrible) initiated a restoration of the church, which was completed in 1564. Two additional domes were added on the western side as well as four side altars, each crowned with a dome, so that the cathedral now has a total of nine domes. In 1572 the cathedral got an additional staircase on its south facade, which was later named "Groznensky" (Russian: Грозненский ), named after Ivan the Terrible (Russian "Iwan Grozny"). The part of the interior of the church that was destroyed in the fire in 1547 was also faithfully restored in the middle of the 16th century.

From Ivan's coronation onwards, the Cathedral of the Annunciation was now the house church of the monarchs of the Russian Tsar and remained so until the construction of the neighboring Terem Palace of the Tsar and palace churches in 1636. During this period, members of the Tsar's family prayed here, were married and their children to baptize. But even after losing the status of the tsar's house church and even after the tsar's court moved to Saint Petersburg , the Annunciation Cathedral remained one of the most important places of worship in Russia. Its head was also the tsar's confessor, and the services in the cathedral were attended by the tsar's family on special occasions. 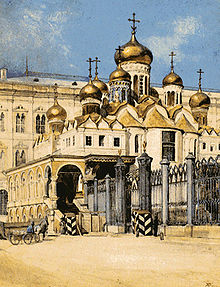 Cathedral of the Annunciation in 1848

After the 16th century, the Cathedral of the Annunciation was damaged several times: a large part of the church treasures were stolen by the Polish-Lithuanian interventions during the so-called Smuta at the beginning of the 17th century. In 1737 a particularly devastating conflagration (the so-called "Trinity Fire") occurred in the Kremlin and damaged the Annunciation Cathedral, along with other structures in the fortress. The subsequent restoration work with the participation of the renowned city architect Matwei Kazakow was partially destroyed again during the war against Napoléon in 1812 , when the cathedral was used as a barracks by the French occupiers and most of it was robbed. Reconstruction work followed in the years 1815–1820. There were further major renovations to the Annunciation Cathedral in the 1840s, when it was connected to the new Tsar's residence by a transition when it was built, and in the 1880s.

In the fighting in Moscow during the October Revolution of 1917 , the cathedral suffered further damage and was shortly afterwards closed as a place of worship by the new Bolshevik rulers, like the other Russian sacred buildings, and nationalized. In the 1950s, the Annunciation Cathedral was reopened to the public as a museum together with the other preserved church buildings of the Moscow Kremlin.

Even today the cathedral is a museum and belongs to the ensemble of the State Museum Reserve "Moscow Kremlin". Church services have been celebrated here since 1992, once a year on April 7th on the Orthodox holiday of the Annunciation. Then the service in the Cathedral of the Annunciation will be conducted by the Moscow Patriarch .

From 2005 to 2012 the Annunciation Cathedral was again extensively restored.

The Annunciation Cathedral is slightly smaller than the other two Kremlin cathedrals. Since it, like the Church of the Deposition of the Robe, was not created by Italian but by Russian architects from Pskov, it also differs somewhat in architecture from the Cathedral of the Assumption and the Archangel Michael Cathedral. The main characteristic of the Annunciation Cathedral is its nine domes, for the gilding of which Tsar Ivan the Terrible, according to legend, had church decorations from Novgorod remelted. The roof of the cathedral is rich kokoshniks -Ornamentierungen primarily in Kiel arc shape on. The cathedral was built from bricks, with the facades clad and decorated with white limestone , which is particularly typical of Moscow church buildings from the 15th century.

There are entrances to the cathedral on the east and south sides of the building. Today, tourists enter the cathedral via the eastern staircase, while the one on the south side is the one that was added for Ivan the Terrible in the 1570s. It was particularly badly damaged during the fighting in 1917 and was faithfully restored in the middle of the 20th century. The relatively high staircases leading to the entrances indicate a peculiarity of the construction of the Annunciation Cathedral: it was built on the raised base of its predecessor. In the 15th and 16th centuries, the basement was used by the Tsar's court to store money and other treasures.

In addition to the actual prayer room, the interior of the church consists of several surrounding galleries that were created when side altars were added in the 16th century. The northern gallery (facing the Facetted Palace) is the first room that is entered via the visitor entrance. Among other things, there is a larger icon of the Savior above the entrance gate, which is attributed to the well-known Russian icon painter Simon Ushakow . The gallery is separated from the main room by an entrance portal, which was created by Italian architects in the 16th century in a striking azure blue color scheme with gilded plant ornaments. The corresponding copper door leaves are decorated with images of well-known ancient poets and philosophers (including Diogenes , Euripides , Plato and Homer ). 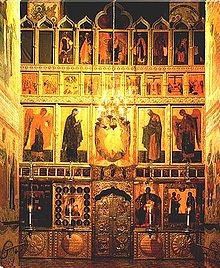 Iconostasis of the cathedral

In the entire interior of the cathedral, parts of the wall paintings from 1508, executed by "Master Theodos, son of Dionysus, and apprentices" have been preserved to this day. They can be seen in the side galleries as well as in the main room and contain, in addition to diverse biblical motifs, images of heroic Russian princes and grand dukes. A large part of the current wall painting of the Annunciation Cathedral is, however, later replicas, as many of the original frescoes were destroyed in fires in the 16th and 17th centuries.

In the main or altar room of the cathedral, the vault of which is supported by four rectangular (and also richly painted) pillars , the main attraction is the five-tier bronze iconostasis with icons from around 1405, which were originally housed in the previous building. Particularly remarkable are the third from the top (“solemn”) and the fourth (“ Deësisrang ”) row, some of whose icons are attributed to the famous authors Andrei Rublev and Theophanes the Greek . The fifth (lowest) row contains an artfully decorated silver gate in the middle, which is known as the "Tsar's Gate": In Russian Orthodox churches it is the main gate of the iconostasis that leads to the sanctuary of the house of God and symbolizes the gate to paradise.

Also striking is the floor in the chancel, consisting of plates made of agate-like yellow-red jasper , which may originally come from Constantinople . Behind the altar (where the cathedral sacristy was once ) is a large silver reliquary made in 1894, which contains the remains of around 50 saints. The relics were brought here from various places in the Christian Orient from the 15th century and into the 20th century .

Commons : Cathedral of the Annunciation (Moscow)  - Collection of images, videos and audio files