Niendorf is a district of the municipality of Siemz-Niendorf in the west of the district of Northwest Mecklenburg in Mecklenburg-Western Pomerania (Germany). The place belongs to the office Schönberger Land with seat in the city of Schönberg . Niendorf is at the gates of the city of Lübeck and is part of the Hamburg metropolitan region .

Niendorf is located on the river Maurine , approx. 13 km southeast of Lübeck . The hilly area around the place reaches heights of up to 50 m above sea level. NN. 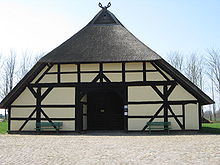 For the first time, the former Rundling Niendorf together with the current district of Ollndorf was mentioned in a document in 1194 in the Isfried partition contract , 1257 Bechelsdorf and 1308 Törpt followed. The oldest house in the area (the Schulzenhaus ) stood in Bechelsdorf until 1960 ; it was rebuilt as a memorial courtyard in Schönberg and is now operated by the Folklore Museum in Schönberg . Some cone graves in the area around Niendorf are noteworthy.

In Bechelsdorf, Lübeck's chief forester Carl Hermann Haug (1811–1878) , who was interested in archeology, excavated a royal grave from the Bronze Age in 1869. In addition to a dagger and a sword hilt, the burial mound contained an initially difficult to identify find made of leather with two wooden sticks and fittings, which the restorer Carl Julius Milde , who was then living in Lübeck in the Nöltingschen Haus , together with the pharmacist of the Löwen pharmacy opposite Theodor Schorer initially identified it as a bag. After doubts arose about this provision from 1895 onwards, the item was unequivocally identified as a folding chair in 1915 . The folding chair from Bechelsdorf was destroyed in the Lübeck Museum am Dom during the air raid on Lübeck and is only preserved as a reconstruction and in the drawings of the find by Milde.

On July 1, 1950, the previously independent communities of Bechelsdorf, Klein Siemz, Olindorf and Törpt were incorporated. On May 26, 2019, Niendorf was merged with the neighboring municipality of Groß Siemz to the east to form the new municipality of Siemz-Niendorf . The last mayor was Marianne Bentin.

The A 20 ( Lübeck - Wismar ) passes Niendorf immediately to the north, the Schönberg and Lüdersdorf junctions are each about 7 km away. The important connecting road from Schönberg to Ratzeburg in Lauenburg runs through Niendorf. The nearest train station is in Schönberg, a few kilometers to the north ( Lübeck – Bad Kleinen railway line ).