The Parish Church of Nuestra Señora de la Concepción (Parroquia de la Inmaculada Concepción de la Virgen María) is the main church in the town of La Orotava on the island of Tenerife . Its distinctive feature is the dome, the design of which is inspired by the dome of Florence Cathedral in Italy .

In 1498, construction of a chapel began on the current location of the church. Over time, this chapel was expanded into a parish church with several side chapels. The building was badly damaged by the earthquakes that accompanied a volcanic eruption in Güímar between 1704 and 1705 . All attempts to repair the damage in the following years were unsuccessful, so it was decided to demolish and rebuild the church. In 1768 the foundation stone for the rebuilding of the church was laid.

The financing of the new church shows the attachment of former, emigrated residents to their city, so a large amount of donations was raised by emigrants who came from the Orotava Valley and had emigrated to South America and the Caribbean. In addition, King Charles III. thereby a contribution to the construction of the church, which was under his patronage, that he allowed the community in 1769 to ship two additional shiploads of a total of 300 tons of wine and brandy to Venezuela and sell them free of duties in the port of La Guaira . In 1775 this action was repeated with a load of 200 tons. These events are commemorated on the facade with a depiction of two globes. The sphere on the south side of the main portal shows the islands of the Caribbean, the sphere on the north side shows the Canary Islands.

After ten years of construction, the construction plans were sent to Madrid for approval in 1778. After another seven years, the corrected plans arrived back in La Orotava. It was requested that the church should be closed with a dome and the roof with a barrel vault . In addition, the old main altar with the wooden retable was to be replaced by a marble tabernacle . The building, which was largely completed at that time, was adapted to the new planning specifications by the local master builder, as far as this was possible without demolition measures. In 1788 the church was consecrated by the Bishop of the Canaries . The church has been a listed building since 1948.

The main facade facing east shows the typical characteristics of the late baroque . The convex, outwardly curved basic shape is divided into three clearly delimited areas: the center with the portal , the slightly recessed side parts, and the two towers. These towers reach a height of 24 meters and are divided into three bodies. Starting from a base on a square floor plan, they merge into an octagon with openings in the upper part. The conclusion is formed by onion-shaped domes. The north tower was already completed when the church was inaugurated, while the south tower was not completed until 1822. A tower clock has been in this south tower since the beginning of the 20th century.

The middle part of the facade shows the strongest ornamentation. The semicircular portal, which is framed by two pilasters with heavily carved capitals , is of particular importance . Above it there are cantilevered cornices that form a roof over the hemispheres. The hemispheric representation with the Antilles (south side) and Canary Islands (north side) refers to the construction financing described above and represents the solidarity with the donors located there.

Above a heavily ornamented volute-like intermediate piece, smaller pilasters rise, giving an impression of greater height and elegance. In the center of the facade there is a balcony supported by a console . The console is adorned with floral decorations with rococo hints and two eagles. In the upper part of the facade, between the door to the balcony and a window, there is a small niche with a statue of the church's namesake.

The decoration of the facade ends in a curved cornice, which closes the middle and the side parts at the top. Below this end there are four gargoyles which, in addition to decoration, also serve to drain the water from the roof surface.

The main entrance of the previous church was on the north side. On the facade there are some decorative elements in the Renaissance style . A large entrance door is framed by two pilasters with small niches for figures, in which, however, figures were never placed. There is a richly decorated cross above the semicircular arch. A plaque in the lower area of ​​the tower reminds of the laying of the foundation stone in 1768.

There is a large door on the south side of the church as on the north side. However, its border is much simpler than that of its counterpart on the north side. It is decorated with fluted three-quarter columns with simple capitals, which are adjoined by a semicircular arc. From street level, steps lead down to the level of the church. Due to the very small viewing distance here, the counterweights that hold the vault are particularly powerful on the south side. Some time ago, during renovation work, ornaments were uncovered with which the windows of the sacristy were framed.

The interior consists of three large naves and six side chapels, three on each side. The chapels are separated by walls that take the weight of the vault. The chancel is the same height as the main nave. Behind the chancel there is another, equally large yoke for the choir , which is barely visible from the main nave, behind the tabernacle. The dome is supported by four bundles of pillars, which are connected to the wall on the side of the sanctuary. These bundles of columns have Corinthian capitals . Above these capitals there are structures in the shape of an inverted pyramid, on which further pillars follow. This involved adapting the existing column system to the changed building specifications, which provided for a barrel vault and a dome. The main nave and the side aisles close at the top with a barrel vault. The dome is formed by 16 ribs with corresponding filling areas. It ends in a lantern that contains eight semicircular arched windows.

In the chancel of the main nave there is a temple-like tabernacle. The work in classicist style was created in Genoa in 1822 in the workshop of Giuseppe Gagginis. The materials are marble and jasper . The architect José de Bethencourt y Molina played a key role in the design. On the two sides there are angels designed by Gaggini: one angel in the posture of worship with bowed head and eyes closed, the other in the posture of contemplation with his head raised. The central part, the shrine, is made of cedar wood and is silver-plated and gold-plated. It was created in 1827 by the La Orotava artist Fernando Estévez. At the top of the tabernacle is a figure representing faith. 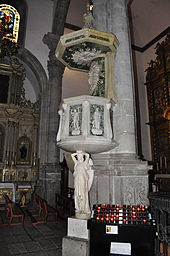 The pulpit is located between the left aisle and the main nave on one of the bundles of pillars that support the dome. It was made from grained marble in the same workshop and at the same time as the tabernacle. The pulpit body is carried by a caryatid angel . The sound cover and the relief of the Holy Spirit date from 1915.

Altar of the Immaculate Conception

Altar of the Immaculate Conception

The altar on the west side of the south aisle dates from the 17th century and was the main altar of the church until 1803. Until then it was in the chancel of the main nave. Centralized view of the altar is a carved and colored aggregate figure of the Virgin Mary in a niche in the middle of the altarpiece. It was created in 1824 by the Genoese artist Angelo Olivari. The altar also shows six carved, mounted and gilded picture panels on three levels. In the lower level there is a depiction of the Annunciation on the left , the engagement of the Virgin Mary on the right. On the second level the representation in the temple is shown on the left, the Assumption in the middle and the Visitation on the right. A coronation of the Virgin Mary can be seen in the top part. 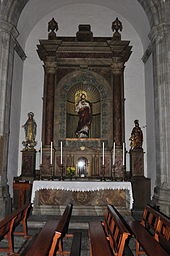 The altar on the west side of the north aisle is dedicated to the capture of Jesus. This altar also already existed in the previous church. It has three niches on the lower level. In the middle niche of the lower level stands the eponymous figure of Señor Preso from the 17th century. On the left there is a figure of Mary from the 20th century, on the right a Saint Joseph with child from the 17th / 18th century. Century. The upper level of the altar contains three images: in the center a depiction of Saint Dominic from the 17th century, on the left side of Saint Joseph and on the right side of the martyrdom of Saint Stephen , both from the 18th century. The picture on the top level shows the sacrifice of Isaac , a depiction from the 18th century.

The treasure of the church

The rooms of the sacristy contain a collection of sacred equipment , liturgical vestments , former pieces of equipment and historical pictures related to the church. This collection can be viewed.