At 145  m, the Oberwaldberg is the highest point in the Groß-Gerau district . It emerged from a rubbish dump and is one of the few mountains whose history has been documented in detail.

The Oberwaldberg is located in the Mörfelden district just under 3 kilometers east of the center of Mörfelden on the A 5 , northwest of the Langen-Mörfelden junction. It has a maximum north-south extension of 700 meters with a width of 270 meters and covers an area of ​​almost 20 hectares.

360 ° panorama from the top of the mountain
From left to right: View in west direction with the Mörfelden-Walldorf industrial area in the foreground; View of the Walldorf district ; Frankfurt Airport with Taunus peaks in the background; Skyline of Frankfurt am Main ( Europaturm , Messeturm , Main Tower , Commerzbank Tower , construction site of the new European Central Bank , Henninger Tower ); Solar park on the former household waste dump in Dreieich - Buchschlag ; Look at long ; Egelsbach (in the foreground A5 and Oberwaldsee ); Erzhausen (in the background the northern Odenwald ); Oberwaldberg plateau 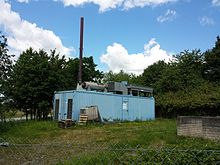 Landfill gas plant of the AWS at Oberwaldberg

The original Mörfelder Oberwald, which gives its name to the mountain and the neighboring Oberwaldsee , has largely disappeared due to the construction of traffic routes and gravel extraction. Even in the place of today's mountain, gravel was extracted until after the Second World War . In 1957 the mine was converted from the then independent town of Mörfelden into a garbage dump. From 1972 onwards, all of the waste from the Groß-Gerau district was dumped here, around 4 million m³ until it was closed.

A waterproof layer of clay had already been laid in around 1982 . From around 1985 the volume of the pit was filled to the top and the landfill gradually grew into a hill. After the closure, the garbage was encapsulated by applying a top sheet of waterproof clay. The water that collects inside is collected in shafts and fed back into the mountain in order to keep the decay process of the waste going. The landfill gas produced during the organic degradation process is converted into electricity in a power plant at the Waste Management Center South Hesse (AWS) , in 2006 it was still around 300 kWh per day, with a further decreasing trend. Downtimes of the small power plant can be recognized by the fact that a gas flare is then ignited, which burns the gas.

According to plan, the landfill aftercare can be ended in 2016 and the mountain can be fully released.

Due to the ongoing gas formation, only two paths to the Oberwaldberg plateau, 45 m above the valley floor, are currently released; the rest of the area planted with bushes and trees is still fenced. In 2006 the AWS set up a visitor platform from which one has a very good view of the surrounding gravel pit lakes and villages, to Frankfurt am Main , to Frankfurt Airport and to the southeast of the Odenwald .

The regional park circular route leads around the Oberwaldberg in the north, east and south.