Fountain in the back alley

Mörfelden is located on a cleared island in the wooded sub -Main plain in the Rhine-Main area , in the triangle between the southern Hessian cities of Frankfurt am Main , Darmstadt and Mainz and south of Frankfurt Airport . In the east-west direction, the district is drained by the Gundbach in the north, the Geräthsbach in the middle and the Hegbach in the south. In the west, the district has a share in the extensive nature reserve Mönchbruch . East of Mörfelden, at the National Highway 5 , are the upper Forest Lake , and the resultant from a former landfill Oberwaldberg , 145 meters is the highest point in the circuit large-Gerau.

The closest localities are in the north, just under four kilometers away, the suburb of Walldorf, in the east Langen , Egelsbach and Erzhausen , in the south Weiterstadt with the districts of Graefenhausen and Schneppenhausen and the municipality of Büttelborn with the parts Worfelden and Klein-Gerau , in the southwest Groß- Gerau and Nauheim as well as the Rüsselsheim districts Königstädten and Haßloch in the west and finally the town of Raunheim in the northwest .

The existence of the place can be traced back to the years 830-850 as a Franconian imperial estate in the Reichsforst und Wildbann Dreieich in the Codex Laureshamensis in the then spelling Mersenuelt .

Finds from burial mounds in the area suggest that settlements existed here as early as the Bronze Age. On the southern edge of the village, the site of an abandoned moated castle , Mörfelden Castle, was discovered. There are no more building remains, and there are no documents about the construction and the fall of the castle.

Already in Roman times, many roads led through this area. As an important trading and traffic center, Mörfelden received its own customs office in the 15th century. The trucking trade was of great importance on the spot.

Around 1232 a chapel is mentioned in Mersenvelt and in 1304 an ecclesia parochialis as a "parish church with a branch on the Gundhof".

The Thirty Years' War also hit Mörfelden hard. Due to acts of war and the plague, great human losses and destruction were to be lamented. In 1694 only 159 inhabitants were recorded.

The statistical-topographical-historical description of the Grand Duchy of Hesse reports on Mörfelden in 1829:

»Mörfelden (L. Bez. Langen) Lutheran parish village; is 2 St. from Langen, and has 142 houses and 991 inhabitants, who are Lutheran except for 2 Cath. and 45 Jews. The place is surrounded by a very wide dry moat, over which 2 bridges lead. A start has been made on the site towards Langen with a new building complex; you will find 1 mill and 1 brickworks. - Mörfelden appears in Lorsch documents under the name Mersenvelt . In 1504 Philipp von Falkenstein ceded his tithes to the parish in Mörfelden and at the Gundhofe in return for an annual fruit lease, and in 1383 another Philipp von Falkenstein granted the benefit of the tithes to Mörfelden and the Gundhofe to the pastor at the time, Heinrich von Münzenberg Lifelong. Archbishop Conrad moved customs from Mainz to Mörfelden in 1421. The place came from Isenburg in 1600 with the entire Kelsterbach office through purchase to Hesse. "

1832 Province Starkenburg is then in circles divided and Morfelden get to the district of Gross-Gerau . It belongs to this group until today, only interrupted by the division of Starkenburg into administrative districts. From 1848 to 1852 it was part of the Darmstadt administrative region .

The 19th century brought Mörfelden a slow but steady upward development. With the commissioning of the Riedbahn by the Hessian Ludwigsbahn in November 1879, the upswing intensified. As early as the middle of the 19th century, numerous residents commuted to the nearby large cities. As a result, Mörfelden increasingly transformed itself from a farming village into a workers' community. Many Mörfelder were active in the construction industry. Colloquially, Mörfelden was therefore called the mason village .

After the Second World War and the currency reform in 1948 , Mörfelden first grew through the reception of expellees and refugees and later through the stormy economic development of the Rhine-Main area . For the constantly growing population, new residential and commercial areas had to be developed and the performance of the infrastructure expanded.

The municipality of Mörfelden was granted the right to use the designation city on March 5, 1968 by the Hessian state government .

In the course of the regional reform in Hesse , the cities of Mörfelden and Walldorf were merged to form the city of Waldfelden . A year later, at the request of the newly founded city, the name was changed to Mörfelden-Walldorf .

The following list gives an overview of the territories in which Mörfelden was located and the administrative units to which it was subordinate:

The landmarked, around 35 m high tower on Frankfurter Strasse is a landmark of Mörfelden. The structure, which is now closed, was built in 1929 together with a waterworks.

The old town hall is located at Langener Straße 4 on the " Dalles ". Today it houses the social and housing office (as of 2017). The two-story structure was built in 1876. In 1996 there was a complete renovation and the extension with a single-storey extension.

In 1992 Reiner Uhl created the fountain in front of the old town hall. The so-called narrative stone depicts scenes from the city's history. It also addresses problems such as air traffic and other traffic loads. 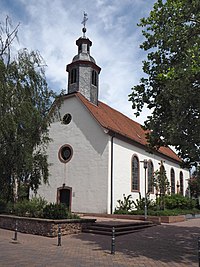 The Evangelical Church in Mörfelden is a baroque building that was built in 1729 on the remains of a previous building from the 14th century. In 1827 there was an extension. On the outer wall there are epitaphs from the 16th and 18th centuries. The building has been a listed building since 1936. In the years 1964–67 the church was renovated.

The historic inn at Langgasse 45 has existed since 1751. In the back of the Hofreite is the local history museum, which was set up in 1990 and gives an insight into the history of Mörfelden.

On the B 486, about five kilometers west of Mörfelden, is the Mönchbruch hunting lodge , which was built in 1730 by Landgrave Ernst-Ludwig of Hesse-Darmstadt .

Two kilometers south of Mörfelden is the forester's lodge of the Apfelbachbrücke district forester. The building is the only surviving pavilion of a hunting grounds built by Landgrave Ernst-Ludwig in 1725 .

The Riedbahn from Frankfurt am Main to Mannheim has been expanded on the one hand for high-speed traffic up to 200 km / h, on the other hand the Mörfelden station is the station for the regional train RE 70 and for the S-Bahn line 7 of the S-Bahn Rhein-Main . After Frankfurt (Main) main station and the journey takes about 20 minutes. There are also bus routes to Frankfurt am Main Airport Terminal 1.