Pope visits to Switzerland and Liechtenstein 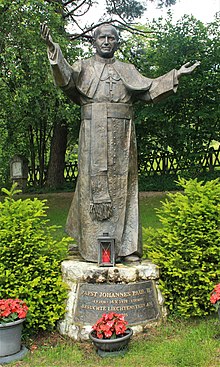 There have been six official papal visits to Switzerland and Liechtenstein so far.

Martin V , who was elected at the Council of Constance , was probably the first Pope to travel through the Confederation in 1418 .

In 1969 Paul VI visited in Geneva the International Labor Organization , which was then 50 years old, and the World Council of Churches .

Francis' visit to Geneva in June 2018 was again for the World Council of Churches, on the 70th anniversary of its foundation.

Pope Benedict XVI stayed in June 2006 on Swiss soil on when he on the Great St. Bernard breeding station of Saint Bernard dogs attended. This private stay during the holidays in the Aosta Valley was not of an official nature.