Pemphigus foliaceus is a rare skin disease belonging to the group of autoimmune blistering skin diseases . In contrast to pemphigus vulgaris , it is characterized by the formation of bubbles in the upper layers of the epidermis . It is triggered by autoantibodies against desmoglein 1 (a cadherin ). The disease occurs in humans, but also domestic dogs , domestic cats and horses .

The etiology of this autoimmune disease is unclear.

The autoantibodies formed in the disease are directed against desmoglein 1 (confirmed in humans and dogs, probably also in cats). This protein occurs in the desmosomes , which ensure the cell cohesion of the keratinocytes in the outermost layers of the skin (in the so-called stratum spinosum ).

An antigen-antibody reaction releases protein-degrading ( proteolytic ) enzymes and the connection between the skin cells is broken. As a result of the lack of cell cohesion, the keratinocytes are rounded off (so-called acantholysis ) and first crevices and then bubbles form within the epidermis . Since desmoglein 1 occurs only to a small extent in the mucous membranes and if desmoglein 1 fails, its function is compensated by desmoglein 3, which is present in all the upper layers of the mucous membrane, the disease is limited to the outer skin.

The primary symptom in humans is blisters that affect only the top layers of cells. Since the bladder cover is extremely thin due to its very superficial location, intact blisters will rarely be seen in patients. Rather, you will find all the sequelae of the burst bubbles. Round, partly confluent erythemas appear in combination with crusts , scales and erosions . The disease begins with the crusts on the face and neck described above, then spreads over the body towards the hands and feet. The hairy head is usually also affected. Only the mucous membranes, in contrast to pemphigus vulgaris, are usually not affected. The patients mainly suffer from severe itching and burning.

Sun exposure during the disease phase significantly worsens the symptoms.

Complications due to inadequate treatment and care of the wounds are severe infections , healing with scars and hyperpigmentation .

The Nikolsky sign , i.e. the detachability of the skin by light tangential pressure, can be triggered in the active stage of pemphigus foliaceus.

In addition, a skin biopsy is examined histologically and with immunofluorescence . The gap formations and antigen-antibody complexes that trigger it are found in the upper layer of the skin. In the blood, the let IgG - antibodies against desmoglein 1 (Dsg1) demonstrate the height of the titer usually correlates with the activity and severity of disease.

The treatment of pemphigus foliaceus largely corresponds to that of pemphigus vulgaris. It essentially consists of the systemic administration of glucocorticoids . Initially, they are administered in high doses until the disease process comes to a standstill (negative Nikolski sign and the skin defects begin to heal). Then the dose is gradually reduced. In addition to the glucocorticoids, other immunosuppressants are being used more and more , especially in long-term therapy. Just as important is the appropriate care of the skin lesions and the prevention of complications (e.g. by giving antibiotics ).

In long-term therapy, low doses of glucocorticoids are often administered together with other immunosuppressants.

Stopping the medication too quickly often leads to a relapse of symptoms.

Pemphigus foliaceus in dogs and cats

Generalized pemphigus foliaceus in a dog 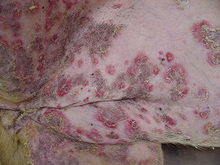 Groin pemphigus foliaceus in a dog

Pemphigus foliaceus is the most common form of pemphigus disease in dogs and cats, but overall it is very rare. Only about 0.5% of all skin patients suffer from one of the forms of pemphigus.

In contrast to humans, bubbles are found even less or never in animals. Since the epidermis in dogs and cats is very thin, these blisters burst very quickly, so that the resulting crusts are the main symptom. In addition to crusts, reddening (erythema) and all sorts of secondary fluorescences such as erosions , ulcers , dandruff or hair loss ( alopecia ) can occur. As the disease progresses, a secondary bacterial infection with pyoderma can occur.

The crusts occur mainly on the head (nose, eye area and ear) as well as on the paws (including pads, in dogs especially the claw bed ), in the groin area and in cats also around the nipples. Intact blisters are most likely to be found on the inside of the auricle.

Itching ( pruritus ) is more pronounced in cats than in dogs. In addition, cats are more prone to general disturbances with fever if they spread over a large area .

The diagnosis is made based on the typical localization or by cytological examination (acantholytic cells). If necessary, other skin diseases can also be excluded by not working on previous therapies. A reliable diagnosis is only possible through the histopathological examination of a skin biopsy. Evidence of autoimmune antibodies as in humans has not yet been established in veterinary medicine.

The therapy can only take place by suppressing the immune system , whereby immunosuppressants such as glucocorticoids ( prednisolone , dexamethasone or triamcinolone ) are used. To reduce the side effects of glucocorticoids, they can be used in combination with chlorambucil . Azathioprine can also be used in dogs ; this active ingredient is contraindicated in cats due to fatal side effects .

Immunosuppressive therapy should only be carried out after careful diagnosis, because it is contraindicated in the case of mite infestation.