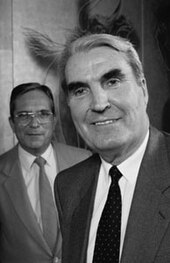 He spent his childhood and youth in western Switzerland and in southern France . As a farm worker, he was employed on an estate in Thurgau that belongs to a psychiatric clinic. Later he was a nurse at the Oscar Forels clinic in Rives de Prangins. At the ETH Zurich he trained as an engineer-agronomist in order to hold managerial positions in agricultural organizations.

Alfred Gehrig was able to win Arnold over for Migros in 1958. At that time, the Federation of Migros Cooperatives (MGB) made the transition from the pioneering era to one of the new technologies. In 1959 he became the youngest member of the administrative delegation, the governing body of the MGB. The Migros industrial companies were assigned to him as a department.

Arnold developed the company Seba Aproz SA , which Gehrig had started in Lower Valais, into a large company. In the first few years, however, there were also tensions between him and Migros founder Gottlieb Duttweiler and his long-time economic advisor Elsa Gasser . He was characterized as an offensive manager who could inspire, but also offend with his style.

In 1976, Pierre Arnold succeeded Rudolf Suter as President of the Administrative Directorate and thus the highest Migros boss. He brought women into management positions for the first time, namely Arina Kowner as director for social affairs and culture and Charlotte Hug as coordinator of the Migros press. He wrote letters to the cooperative members every week, some 400 in the eight years of his presidency. A selection appeared in 1984 in his book Federführend . The first social balance sheet from 1978, a self-critical account of Migros as a social partner, which was published in addition to the annual report, also fell during his term of office.

From 1984 to 1991 Arnold was President of the MGB Administration. Subsequently, from 1992 to 2005, he presided over the Gottlieb and Adele Duttweiler Foundation.

Pierre Arnold became an honorary citizen of Ballaigues in 1984, an honorary doctorate from the University of Lausanne in 1985 and a member of the French Legion of Honor in 1991 .

Managing directors or general directors of the Federation of Migros Cooperatives