TEM image of a polystyrene latex

The most important, naturally occurring polymer dispersion is natural latex, the milky sap of the rubber tree (Hevea brasiliensis). It is a polyisoprene dispersion with> 97% cis-1,4- polyisoprene and a particle size between 100 and approx. 1500 nm. Another, at least temporarily important source is the gutta-percha tree (Palaquium gutta), whose milky sap is almost pure trans-1 , Contains 4-polyisoprene.

Polymer dispersions are generally not thermodynamically stable: due to coagulation of the dispersion, i. H. By aggregating the individual polymer particles to form more compact structures (the coagulate), the interface between the two phases and thus the internal interfacial energy of the system is drastically reduced ( is the interfacial tension between the polymer and the aqueous phase). If, for example, an energy barrier for coagulation is created on the particles by an electrically charged double layer, one speaks of a kinetically stable or metastable system. The dispersion is still thermodynamically unstable, but a certain amount of energy (e.g. through shear) must first be expended for coagulation in order to overcome the energy barrier. 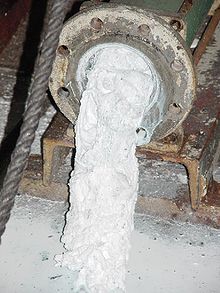 The metastability of the polymer dispersions is important for their application and processing. For example, polymer dispersions can be produced by correspondingly high shear forces, as they are, for B. occur in pumps, on pipe installations (e.g. screens), sieve systems and so on, coagulate. When mixing into paints, adhesive formulations and so on, unsuitable agitators (e.g. high-speed dissolver discs) can lead to shear-induced coagulation. There is also the risk of coagulation being triggered by individual recipe components, such as B. strong acids or bases (pH value change, reduction of the solvation of the hydrophilic parts of an- or cationic surfactants), polyvalent metal ions (ionic crosslinking), fillers or pigments without simultaneous, sufficient addition of wetting agents (emulsifier molecules migrate from the polymer particles to the filler particles ) u. a. Other causes of coagulation can be sharp changes in temperature, freezing or a sharp increase in the viscosity of the serum (e.g. due to the addition of thickeners too quickly).

Polymer dispersions can be stabilized with anionic or cationic surfactants by forming an electrically charged double layer or by steric stabilization with nonionic surfactants or protective colloids.

The properties of interest and their characterization naturally depend heavily on the respective application or - in the case of development work - on the relevant question. The following list can therefore not claim to be complete, but only show a few possibilities.

The solids content of a polymer dispersion results from the proportion of non-evaporable components. The main component is made up of the polymer particles, further components are emulsifiers, protective colloids and other components dissolved in the aqueous phase (e.g. salts). High-boiling solvents and plasticizers are usually also included in the solid state, whereas more volatile solvents (e.g. as film-forming aids) are not. The determination is carried out gravimetrically by determining the evaporation residue, usually reference is made to DIN EN ISO 3251.

The determination of the pH value is usually carried out using measuring devices equipped with glass electrodes (mostly referring to DIN 53785). Maintaining a certain pH value for the polymer dispersion is important for applications in which the pH value plays a decisive role, for example in the formulation of emulsion paints, where many of the thickeners and wetting agents used have strong pH dependencies. Furthermore, the pH value is important for the stability of the dispersion itself, since anionic surfactants and acid groups bound in the polymer (e.g. from methacrylic acid ) can only contribute sufficiently to colloidal stabilization in the neutral to slightly basic range.

The rheological behavior of polymer dispersions is usually quite complex and often deviates significantly from Newtonian flow behavior. Only dispersions that are free of protective colloids and have a very low solids content show approximately Newtonian behavior. Usually there is a thixotropic and / or structurally viscous flow behavior. Deviations or errors in production (e.g. emulsion polymerization) can also result in dilatant dispersions. The rheological properties can only be characterized by recording flow curves at different shear rates. In quality or incoming goods inspection, however, one often limits oneself to measuring the viscosity at a shear rate with the Brookfield rheometer (viscosity information then stating the speed and spindle number). Precise temperature control is particularly important for more precise measurements.

Conventional light microscopy reaches its resolution limits with the usual polymer dispersions with particle sizes in the range of a few hundred nanometers. Although it is possible to observe the Brownian movement of the particles in the case of highly dilute dispersions and not too small particle diameters (better: to guess), dimensions or even internal structures cannot be recognized. 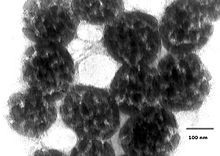 The currently most efficient and meaningful microscopic characterization method for polymer dispersions is transmission electron microscopy . Due to the much shorter wavelength of the radiation, details down to the size of a few nanometers can be displayed. Since the electron radiation penetrates the polymers, the internal structures of the particles can also be mapped in addition to the external shape. The sample image shows a dispersion of weakly crosslinked particles of poly (butyl acrylate / ethyl acrylate) in which inclusions of polystyrene (with a little divinylbenzene ) were formed in a second polymerization step . The inclusions were made visible by selective contrasting with ruthenium tetroxide (which only accumulates in the polystyrene phase). Disadvantages are the high expenditure on equipment and the sensitivity of some polymers (e.g. acrylates) to electron beams. When determining the particle size on the basis of TEM images, it must be taken into account that even particles made of softer polymers can “spread out” a little on the slide and thus simulate a larger diameter.

SEM image of a hollow latex with an incomplete shell

If a scanning electron microscope is available, at least the external shape of the particles and their size can be determined. Conclusions about the internal structure are i. A. not possible.

AFM image of a dispersion of polyacrylic acid esters with inclusions of polystyrene.

Even with the relatively new method of atomic force microscopy , the individual particles of polymer dispersions can be made visible. Similar to scanning electron microscopy, only the dimensions and the external shape of the particles can be mapped, internal structures remain invisible. In the so-called "tapping mode" of some microscopes, different mechanical properties of individual phases can be visualized. The example image shows the same dispersion as the TEM image. The hard PS inclusions that reach up to the surface are visible in the soft acrylate matrix due to the different phase position of the signal (material contrast, in contrast to TEM without special contrasting). The relatively soft particles have converged (filmed) on the slide (freshly split mica ), so that the original spherical shape can only be guessed at.

For many applications, such as B. as adhesives or binders in coatings, the ability of the polymer dispersions to form a continuous film when they dry is of crucial importance. As the water evaporates, the particles move closer together until the capillary forces acting between the particles become so great that the repulsion by surfactants or protective colloids is overcome and the particles touch. If the particles are sufficiently deformable, they are deformed by the forces acting and finally fuse to form a continuous film. For the polymer particles to have sufficient deformability, the temperature during filming must be above a certain temperature, the minimum film formation temperature or MFT for short. The MFT is naturally strongly related to the glass transition temperature of the polymer, but is also determined by the proportion of hydrophilic polymer components (water-soluble monomers such as methacrylic acid, hydroxyethyl methacrylate , acrylamide and so on), the particle morphology (e.g. core / shell), possibly in protective colloids, external plasticizers and the like contained in the aqueous phase a. influenced. The MFT is usually determined on a film-forming bench with a temperature gradient.

In the simplest case, an optionally slightly modified (addition of plasticizer, thickener) polymer dispersion can already be used as an adhesive. One example is cold glue (or white glue) in wood processing. It is essentially a polyvinyl acetate dispersion, often stabilized with polyvinyl alcohol (mostly copolymerized with small proportions of butyl acrylate or other acrylic acid esters, acrylamide , acrylic acid, etc.). Further applications are adhesive dispersions for self-adhesive labels (copolymers based on styrene- butadiene or (meth) acrylic acid ester) as well as adhesives in construction chemistry such as tile adhesives or adhesives for thermal insulation composite systems (mostly copolymers made from styrene and (meth) acrylic acid esters).

Interior emulsion paints are now rarely formulated on the basis of styrene copolymers. Most often copolymers of ethylene , vinyl acetate and acrylic acid esters are used. For the realization of the emission-free and solvent-free paints ( Blue Angel ), which are increasingly required today , plasticizer-free dispersions with relatively soft polymer (low glass transition temperature) and low residual monomer content are used.

Polyurethane or pure acrylate dispersions are predominantly used for the formulation of aqueous paints. The latter are often produced using special comonomers, which improve the adhesion of the paint on difficult substrates, crosslink the particles after drying with one another and the like. a. should cause.

So-called hollow latices are used as white pigments for another (niche) application . These are dispersions of multiphase polymer particles that contain a water-swollen core. When the dispersion dries, the water diffuses out of the core, the swollen polymer dries with shrinkage and leaves a cavity where the light is scattered in the polymer film.

In the manufacture of plastics, polymer dispersions play a role as an intermediate product in some cases. In addition to the production of PVC and polyacrylonitrile , ABS and impact-resistant PMMA are mainly produced via the intermediate step of a polymer dispersion. The possibility of emulsion and suspension polymerization is used here to be able to produce multiphase polymer particles of precisely defined morphology, such as are necessary for the impact modification of brittle polymers. In addition to the need to separate off the water, the disadvantage is the high level of contamination by surfactants and salts, which can have a detrimental effect on the product properties (discoloration, tendency to decompose during processing).