The Reseda plants (Resedaceae) are a family of plants in the order of the cruciferous (Brassicales). 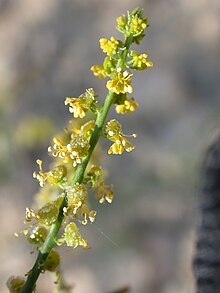 They are herbaceous plants of one, two or more years . The alternate and spirally arranged leaves are stalked or sessile. The leaf blades are simple. Stipules are present.

Many flowers are grouped together in spiked or racemose inflorescences .

The mostly hermaphrodite flowers are zygomorphic with mostly a double flower envelope . There are usually six, rarely four or eight, sepals per flower . At petals rarely is there per flower usually six, no (at Ochradenus ), two (in Oligomeris ), four or eight petals (petals). There are three to about forty stamens and two to six carpels per flower . There is often a short gynophore between the stamen and carpel whorls . The ovary is on top.

Mostly, single-fan capsule fruits are formed, which often open at the top before the seeds are ripe.

The Reseda plants occur in temperate to subtropical climates . The main distribution area is the Mediterranean . Areas are also in Central Europe , Asia Minor , East Africa and South Africa . Some species are also found in southwestern North America and southern India .

In the Reseda family (Resedaceae) there are six genera with around 75 species: