The red ash ( Fraxinus pennsylvanica ), also Pensylvanische ash , swamp ash or green ash called, is a plant of the genus of ash trees ( Fraxinus ) in the family of Olive Family (Oleaceae). The red ash differs from the similar white ash in the thin, hairy branches. The undersides of the leaves are green (silver-green in the case of the white ash). 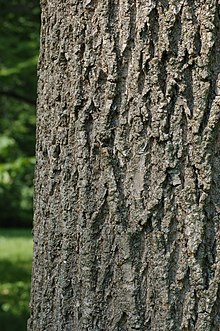 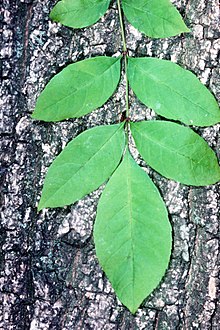 The red ash grows as a deciduous tree that usually reaches heights of 15 to 25 m (maximum up to 45 m) and trunk diameters of up to 60 cm. In young twigs the bark is brown, gray or green, glabrous or downy to woolly hairy, later (in the second to fourth year) it is glabrous or downy hairy. The thick bark is furrowed and peeling off. The fluffy hairy reddish-brown winter buds are conical, ovoid or ovoid-conical with a length of 3 to 5 mm.

The more or less constantly against arranged on the branches leaves are with petiole and leaf blade total of 15 to 30 cm long. The angular petiole and rachis are hairy bald to downy. The imparipinnate leaf blade usually has 7 to 9 (5 to 11) short-stalked to sessile pinnate leaves , which are 5 to 15 (to 18) cm long and 1.2 to 9 cm wide, lanceolate, oblong, oval or are ovate with smooth, notched, or serrated edges. The upper side is green to yellow-green and bare, the underside is green, bare to downy hairy. Stipules are missing. Fraxinus pennsylvanica are one of the tree species that start their autumn colors the earliest (early September in North America) and their foliage turns golden-yellow. 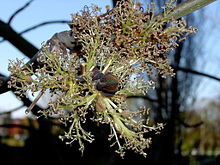 The red ash is dioecious ( diocesan ). At the same time as the new leaves appear in spring, the flowers appear in compact, panicle inflorescences. The unisexual flowers are very small and have no bracts . Pollination takes place by the wind ( anemophilia ). 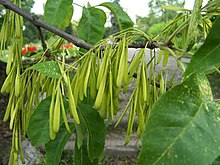 Distribution area of ​​the red ash on the North American continent

The red ash has the largest distribution area of ​​the North American ash species . The northern border runs from Nova Scotia to Alberta and Montana , the southern border from northern Florida to Texas . It rises in the Appalachian Mountains to an altitude of 900 m above sea level. NN. The red ash occurs mainly in alluvial forests , on damp alluvial soils and swamps. However, it also tolerates relatively dry and even slightly alkaline soils and is therefore used for plantings in the prairie and for mining cultivation. It is a character species of the order Ulmen-Silberahornwälder (Ulmo-Aceretalia saccharini).

In the temperate latitudes , the red ash is hardy and is occasionally used as an ornamental wood in parks and gardens. It has a tendency to feral and in some areas it is considered a critical invasive plant . In Germany, too, it is already indicated as naturalized for some federal states. At the beginning of the 20th century, the red ash was also planted in the floodplain forests on the Middle Elbe for forestry reasons .

The wood of the red ash is used in a similar way to that of the common ash .