Sacred 2: Fallen Angel ( English for "holy", "venerable") is an action-oriented computer role-playing game ( ARPG ) and the successor to Sacred , developed by Studio II Software and Ascaron and distributed by Deep Silver . It was released on October 2, 2008 for Windows and on May 29, 2009 for the Xbox 360 and Playstation 3 game consoles . The development process was marked by major problems and delays, which eventually led to the bankruptcy and breakup of Ascaron. The rights then went to Deep Silver, which continued the series on April 17, 2013 with the Sacred Citadel offshoot and finally on August 1, 2014 with the successor Sacred 3 .

In the world of Ancaria there is a magical energy, the T-energy, which can give great power. Initially used by the seraphim as a source of energy for machines and weapons, they had passed on their knowledge to the high elves. Because this energy was so powerful, it generated fear, anger, and envy. This led shortly after to the great war, through which the rebels left the mainland and became dryads. The people became slaves and were only allowed to move freely in a certain area of ​​Ancaria and the number of temple guards, a kind of Anubis-like cyborg, fell sharply. Also the knowledge about the big machine, which generated the T-energy, was lost and over time the pipes of the T-energy broke, whereby monsters and the like formed.

The real game doesn't begin until long after the war, however. The High Elf Empire became a splendid empire, but it soon became apparent that it was suffering from a terrible civil war between the nobility and clergy . Both sides are trying to come to power. In order to gain a decisive advantage, the clergy are trying to find the great machine. On the way of light one tries to prevent it in order to put an end to the war. On the other hand, the path of the shadow helps the clergy.

The six playable characters are the shadow warrior, the seraphim , who is the only figure from the first part to be represented in the second part, the high elf, the inquisitor , the temple guardian and the dryad . According to the manufacturer, the game world size corresponds roughly to that of its predecessor ( Sacred including Sacred: Underworld ). New to the game is the ability to improve characters' special attacks. 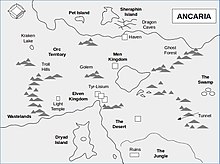 For Sacred 2 was u. a. a new 3D engine developed and support for the physics engine PhysX from Nvidia built in to make the game world more believable. The background story came from the American game designer Bob Bates .

At the Game Developers Conference in March 2007 in San Francisco , Ascaron officially announced that Sacred 2 would also be released for the Xbox 360 , in a graphically enhanced version that was adapted to the consoles and which was to be supplemented by two game modes: quickly accessible arena battles player- against-player and player-against-computer. However, according to project manager Franz Stradal, game development was not yet advanced enough at this point. However, the team was committed to developing a corresponding demo as part of a marketing deal for the Games Convention . For this, the regular work had to be interrupted in order to meet the tight deadline. The resulting content could not be included in the main development.

In autumn 2007 Ascaron announced a cooperation with the German power metal band Blind Guardian . Blind Guardian wrote an exclusive song for the game, with which the band gives a virtual concert in-game. In order to unlock this concert, the player has to complete quests (recovery of the musical instruments) that are placed in the game by the band members. After the quests have been completed, the video of the concert can be selected in the menu.

In cooperation with SecuROM, Ascaron used a DRM system which enables the game to be played online without a DVD in the drive. A more extensive copy protection was waived, instead copies of the game should be expressly created and distributed, whereby activation keys for full use can be purchased online. Without the activation key, the game can be used as a trial version until the end of the installation day.

GameStar criticized the bugs in the unpatched retail version , but gave the game another higher rating with patch 2.31.0. In the GamePro test, no playful differences were found between the two console versions, but the Xbox 360 version is a bit rounder than the PlayStation version due to small graphical differences.

"More crashes than in the beta version? That is not possible! [...] Nevertheless: Sacred 2 is (at least until the release of Diablo 3) the first choice for action role players - if more patches follow! "

At the German Developer Award 2008 , the game was voted the best PC game and the best German action game through an online vote. A year later it was also named the best international console game.

On April 17th, 2009 Ascaron announced on its website that an add-on for Sacred 2: Fallen Angel was in development. On July 8th, 2009 the name Ice & Blood for the add-on was announced in the official Sacred-2 forum , which was released on August 28th, 2009. The add-on unlocks two new areas, the blood world and the crystal world, and a new character class, the dragon mage. In contrast to the expansion Sacred: Underworld , Ice & Blood has no additional story. There are quests for the new regions, but they have nothing to do with the main story.

The radio play publisher Weirdoz * published a five-part radio play series on the game, with Thomas Fritsch in the lead role.