Schaubücher was the brand name of a series of photo books that was published between 1929 and 1932 by Orell Füssli Verlag, Switzerland .

The editor of the series and also the editor of some volumes was Emil Schaeffer . The trained art historian Schaeffer designed a book series that, with the increased possibilities of photography and reproduction technology, wanted to serve the changed reading behavior and buying behavior of an audience that, according to a publisher's brochure, has to be tight with seconds, has no more time to study learned readers and therefore quickly , but still want to be taught well . The focus of the volumes should be instruction and eye candy with excellent photographs. In terms of content, in contrast to the series Die Blauen Bücher published by Langewiesche since 1912, the books at Orell Füssli should have a distinct reference to the present. Six themes were identified when planning the series: culture and society; Art, film and theater; Technology and architecture; Sport and physical culture; Man and race; Nature and research, the size and external design should be uniform, the subject groups were given a color code on the spine of the book.

The graphic artist Willy Burger was (probably) won as a book designer . The volumes are in half-linen, the book cover is illustrated with photos, the back cover is covered with gray-brown paper. The colored linen spine bore information about the author and the short title and the serial abbreviation SB and the volume number on the base . Some volumes differed in format. The volumes were covered with a transparent cellophane envelope when they were sold. The first edition of the volumes is not known; it is assumed to be between 6,000 and 12,000. Few volumes received a (identifiable) reprint. The unit price was 3 francs, or 2.40 Reichsmarks or 4.30 shillings.

The volumes had a text section between 16 and 24 pages and a photo section with 56 to 90 illustrations with explanations. The explanations of the pictures were sometimes written by different authors than the texts. In the majority of the volumes, the photos are not from a single photographer, but the publisher provided the photos from photographers, archives and agencies on a topic-related basis.

The publisher was able to license volumes 6, 17, 28, 30, 31 and 33, they were published in the English version by Routledge under the series title Seen by the Camera .

The effects of the global economic crisis led Orell Füssli-Verlag to discontinue the series, the publisher Zutt was dismissed, the publisher Schaeffer returned to Germany. The remainders were halved prices sold off .

At the same time as the start of the Schaubücher series , Orell-Füssli-Verlag began the What Jungens Tell series , in which fifteen volumes were published by 1933 that were written by young authors and photographers and aimed at a young readership. The first volumes were translated licensed editions from the American. 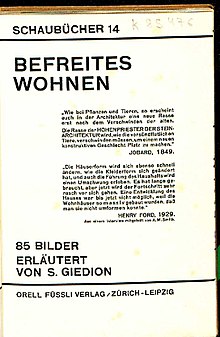 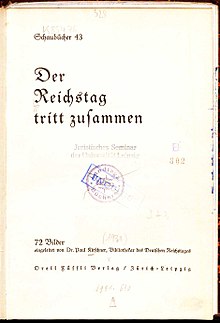 did not show up

Nine titles were planned by the publisher and announced with an issue number.

16 The design language of plants
20 Technical highlights
22 The face of the flowers
34 Wolfgang Amadeus Mozart
34 The Witteisbachers
35 The ocean ship - shape and purpose
38 Three great film comedians
39 Oberammergau and its Passion Play
42 Istanbul - Constantinople, then and now