Battle of the Sakarya

from Wikipedia, the free encyclopedia
Battle of Sakarya
Part of: Greco-Turkish War

Dead Greek soldiers after the Battle of Sakarya
Western front

The Battle of Sakarya ( Turkish Sakarya Meydan Muharebesi ), also Battle of Sangarios ( Greek Μάχη του Σαγγάριου Máchi tou Sangáriou ), was an important battle in the Greco-Turkish War in the course of the Turkish Liberation War . Another Turkish name for the battle was because of the unusually high casualties (70-80%) among the officers Subaylar Savaşı (Eng. War of the Officers ).

The fighting dragged on for three weeks from August 23 to September 13, 1921, and took place on the banks of the Sakarya River in the vastness of Polatlı . The battle front extended over 100 km. The Battle of Sakarya is seen as a turning point in the Turkish War of Independence, which is also expressed in the quote from the eyewitness and writer İsmail Habip Sevük:

In the course of the defeat of the Ottomans in World War I and the concluded treaties, Greece set up an occupation zone around the port city of Izmir in May 1919. At that time, the idea of ​​the Megali Idea ( Greek Μεγάλη Ιδέα ) was very popular among the nationally minded Greeks . According to this, all Greek-populated areas in Anatolia and the Balkans should be united in one large nation-state. The Greek government therefore decided to launch a campaign against the war-weakened Ottoman Empire. The aim was the annexation of areas in Western Anatolia and Thrace with high Greek populations. But Istanbul was also to be conquered again and possibly later made into the new capital. However, under the leadership of Mustafa Kemal Pasha, a resistance movement had developed that fought on several fronts against the victorious powers and the Ottoman government in Istanbul.

On July 16, 1921, the Greek Commander-in-Chief and King Constantine I gave the order for an offensive towards Central Anatolia. A mock attack on the Turkish right flank was thwarted by Ismet Pascha at Eskişehir , while the actual attack at Kara Hisar could also be repulsed. The Greeks then swung north towards Eskişehir and attacked the Turks in a series of frontal attacks and flank movements. Eskişehir was captured on July 17th despite a violent attack by Ismet Pasha. After major losses, the latter withdrew to the Sakarya and was only about 80 km away from Ankara, the center of the resistance movement. 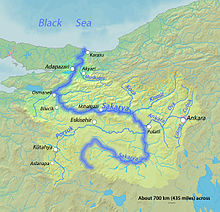 The Sakarya River, on the banks of which the battle took place.

The Sakarya River determined the terrain of the battle: it flowed east through the plain, made a sudden turn to the north and curved west. This arch provided a natural barrier. The river banks were inconvenient and steep and there were only two bridges over the river arch. To the east of the arch the landscape was rocky, barren and hilly as far as Ankara. The Turks stood in this area on a line that led from near Polatlı to the south to the confluence of the Sakarya and Gök rivers. Here the line of defense swung to the right and followed the Gök River. The Turks had an excellent starting position for their defense.

The Greeks now faced the dilemma of either securing their successes or moving towards Ankara and fighting the resistance movement. From the beginning, the Greeks had major problems with communication and supplying the troops. There was a risk of the supply lines being overstretched into a desolate landscape, which clogged animals and machines and made it difficult to transport heavy artillery. The current front, with control of an important railway line, was more favorable to the Greeks. But because the Turkish army escaped an attempt to encircle Kütahya , it was decided to march on Ankara.

On August 10th, King Constantine I gave the order to attack the Turkish lines. The Greeks first had to march for nine days to get into contact with the enemy. Part of the army that was supposed to bypass the line moved through the area of Tuz Gölü , where food was difficult and Turkish villages were looted.

On August 23, there was the first fighting on the Gök River. The headquarters of the Turks was on the railway line in Polatlı a few kilometers east of the Sakarya. On August 26th, fighting had broken out all along the line and the Greeks had crossed the Gök River and met strong resistance on every hill. They were able to take the important hill Çal Dağı on September 2, but failed with their attack on the Turkish left flank. The Greeks therefore concentrated their attacks on the center and fought their way 16 km to the Turkish second line of defense in ten days. Some Greek units came within 50 km of Ankara. This was the greatest advance by the Greeks in the entire war.

For days the Greeks could not bring ammunition or food to the front because the lines of communication were interrupted and actions by the Turkish cavalry took place in the rear field. The Turks, for their part, were mobilized to throw fresh fighters to the front. This situation caused the Greek offensive to lose its initial momentum. The fighting developed into trench warfare and Constantine I, who was at the front in person, was nearly captured by a Turkish patrol.

At the crucial moment, Mustafa Kemal personally launched a small attack on Çal Dağı on September 8th. The Greeks were able to repel the attack, but suspected that this was only a harbinger of a larger Turkish offensive to bypass the Greek lines. This and the approaching harsh Anatolian winter caused Constantine I to end the attack on Ankara on September 14th.

Consequently, Anastasios Papoulas ordered the withdrawal to the Eskişehir-Kara Hisar line. The Greeks had to evacuate positions that had only been successfully conquered with great sacrifice, and took all equipment and weapons with them. Nothing useful was left behind for the advancing Turks, bridges and tracks were destroyed and villages burned down. From now on the initiative was with the Turks.

The withdrawal from Sakarya marked the end of Greek ambitions in Anatolia. In May 1922 General Papoulas and his entire staff were replaced, his successor being General Georgios Hatzianestis . On the other hand, Mustafa Kemal returned to Ankara as the victor and was awarded the titles General Field Marshal and Gazi (Turkish-Islamic for conqueror) by the Turkish National Assembly .

Later, in a marathon ( Nutuk ) speech to his party's congress in October 1927, Mustafa Kemal said that he had given the following orders to the front:

“There is no line of defense, there is a defense area. This area is the home / nation. Before every patch of home is soaked in the blood of the citizens, it will not be left to the enemy. "

The British statesman Lord Curzon saw a military stalemate, but it slowly shifted in favor of the Turks. He also thought that in this situation the Turks would be more willing to negotiate. After the Greeks defended themselves, the Turks negotiated the Treaty of Kars with Russia and, more importantly, the Treaty of Ankara with the French , which ended the French occupation of Cilicia . So they could concentrate entirely on the Greeks in Western Anatolia. The Greeks themselves no longer enjoyed any support from the Allies.

After a year of intensive preparations, the Turks launched the great counterattack (tr: Büyük Taarruz) and finally drove the Greek troops out of Anatolia in a series of victories. Mustafa Kemal moved into Izmir on September 9, 1922 . Greece and Turkey made peace with the Treaty of Lausanne on July 24, 1923.