Southeast and northeast facades with the original half-timbering

Stone tablet with the inscription for the renovation of the facade

Schönebeck Castle is a moated castle in Bremen- Vegesack , district of Schönebeck, built in north German half-timbering . It is located in the valley of the Schönebecker Aue , a Geestbach flowing into the Weser via the Vegesack harbor , which was dammed into a pond in the area of ​​the castle.

Neither the origins nor the start of construction of today's Schönebeck Palace have been completely clarified. Presumably the Junker Franz Wilken von Schönebeck had it built in the 17th century. With Wilken's death in 1661, the line of the hereditary residents of Schönebeck died out.

In 1662 the indebted property was bought by Baron Jacob von Schlebusch , who died in 1666.

In 1677 the city of Bremen tried to acquire the house from the widow of Herr von Schlebusch by means of a purchase contract, which was prevented by the Swedish government, on whose territory the castle and its possessions were located. The house was acquired in 1682 by the nobleman Friedrich von der Borch , who had the south-west side renewed in 1705. He documented the work with a stone tablet on the new facade with the inscription:

"I FRIEDRICH V. DER BORCH, OBRISTER Z. FUS, HAVE BUILT THIS MDCLXXXVI BY HOLTZ U. STONE, AND AFTER ROTATION OF THE WOOD, TAKEN THE CASE THROUGH THE FIRST SIDE, THE FOUNDATION BEFORE FURNISHED U.

After the castle was no longer used by the von der Borch family for decades and threatened to deteriorate, the city of Bremen acquired it in 1952. The building was subsequently restored and handed over to the Vegesack Museum Association, founded in 1911. 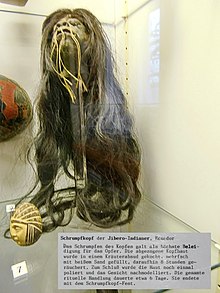 Shrunken head from Ecuador in the permanent exhibition (2017). The head was stolen in February 2018.

Since 1972 the castle has been open to the public as a local museum for Vegesack and the surrounding area. This is also the home of the archive with its extensive scientific library of the Heimat- und Museumverein für Vegesack and the surrounding area, founded in 1911 by Diedrich Steilen , Johann Friedrich Rohr , Bernhard Ahlers and others (formerly the Heimatverein für Vegesack, Blumenthal district and the surrounding area ) collected donated exhibits in the year it was founded. The museum was run by Steeps. The museum and museum association were located in the Havenhaus in Vegesack in 1911, in the Suhrhaus in Rohrstrasse from 1926 and in the Logenhaus in Weserstrasse from 1935 to 1972 .

Special exhibitions deal with the topics of the history of the former port city of Vegesack, sailing , steamship , herring loggers , whaling , the beginnings of sea ​​rescue and the journeys of the Vegesack-born Africa researcher Gerhard Rohlfs . Collectibles from the former Witteburg stoneware factory are also on display . In addition, special exhibitions are held regularly; For example, a nativity scene exhibition from Bremen Cathedral was shown at Christmas 2015 .

The castle is also used for concerts and other events.

Since the end of 2011, civil weddings have been held in the Schönebeck Castle Museum of Local History; the shipping hall serves as the wedding room.

In its immediate vicinity are the administrator's house of the castle, a classicist half-timbered building built in 1780 , as well as the castle gate , which was rebuilt here in the 1980s using historical building elements, in particular the half-timbering.

There was once a watermill at the transition from the castle pond to the Schönebecker Aue.

In 1973 the area around the castle and the administrator's house, including the castle moat, were placed under monument protection as a whole and the two buildings as individual monuments .