Friedrich Gerhard Rohlfs (born April 14, 1831 in Vegesack , Free Hanseatic City of Bremen , † June 2, 1896 in Rüngsdorf , district of Bonn ) was a German traveler to Africa and a writer .

Location (tall building in the middle) of the house where Gerhard Rohlfs was born in Gerhard-Rohlfs-Strasse in Bremen-Vegesack, with a commemorative plaque.

Rohlfs was the third son of a country doctor in Vegesack. Like his six siblings, he was tutored by private tutors in his childhood and early teens. The physically very weakly constituted boy turned out to be a weak student in his youth who refused to pursue the career path prescribed by his parents as a doctor. At the age of almost 15 he went to the Osnabrück grammar school. The pressure from school became so unbearable that he sold his watch, wrote a suicide note to his parents and tried to hire a deck boy on a ship in Amsterdam. The mother prevented this at the last moment. Rohlfs switched to the grammar school in Celle , which he left on June 21, 1847 in order to attend the "school of scholars" leading to the Abitur in Bremen. He also left this prematurely without a degree and first joined the Bremen Fusilier Battalion and then as a non-commissioned officer in the Schleswig-Holstein army. In the war against Denmark he took part in the Battle of Idstedt in July 1850 . However, the defeat of the Schleswig-Holstein army soon afterwards led to its reduction. From this he was released - against his will and against his application - on March 30, 1851.

Like his two older brothers Hermann and Heinrich , Gerhard Rohlfs studied medicine. He began his studies in Heidelberg in 1850 , continued it in Würzburg and Göttingen and broke it off after a few semesters, but without taking an examination that was required for students without a high school diploma.

On March 16, 1854, Rohlfs joined the 21st Feldjäger Battalion of the Austrian Army for eight years, as a simple soldier. He deserted on May 26, 1855. A month later, he was caught by a patrol and overwhelmed after fighting. He came before a court martial. This demoted him to the lowest grade and extended his term of service by a year. On August 25, 1856 Rohlfs deserted again. As a result, he never entered Austria again.

Finally, on November 28, 1856, he was recruited in Colmar as a volunteer in the French Foreign Legion for the 2ème Régiment étranger (2nd foreigners regiment). His service commitment was seven years. He reached the Corps in Colmar on December 20, 1856, became a grenadier on July 8, 1859, started again as a fusilier on January 6, 1860 at his request and became Caporal (private) on May 2, 1860, which was the highest possible Rank that a foreign legionnaire could usually attain. He held this rank until he left.

Rohlfs never wrote about his experiences in the Legion. This topic was not allowed to be raised in the Freundeskreis either. By this time he had learned the basics of Arabic. He succeeded in being appointed chief doctor in the Moroccan army in Fez . He was also allowed to open a private practice. Rohlfs managed to perfect his Arabic and to gain knowledge of the customs, way of life and religion of the North Africans. His greatest wish was to travel to the legendary European oasis of Timbuktu . He crossed the Anti-Atlas , which was previously unknown in Europe , but was ambushed and critically wounded at the Boanen oasis . Due to the massive injuries to his left arm, his fingers were partially stiff throughout his life. After recovering, he made another attempt to reach Timbuktu. He was the first European to reach the oases of Tafilet , Twat and Tidikelt . In In Salah , the main town of the Tidikelt oases, Rohlfs was considered a French spy. This forced him to give up his plans and return to Tripoli via Ghadames on the Mediterranean coast .

In January 1865 Rohlfs returned to Germany, which he had left almost ten years earlier. The Gotha cartographer August Petermann edited and revised Rohlf's travel notes according to scientific criteria. As a special sponsor, he enabled the former dropout to return to society as a respected research traveler.

After a few months in Europe, Rohlfs went back to Tripoli as an officially supported explorer, from there (departure May 1865) to explore the Hoggar massif and move on to Timbuktu. Already in Ghadames he had to change his direction because of the hostile behavior of the Tuareg . He moved via Murzuk in Fessan and Bilma in the Kaouar Valley on Lake Chad to Kuka , the capital of the Bornu Empire . With the support of the Sultan of Bornu, he got from there to the Benue , which he drove to the confluence with the Niger at Lokoja . He reached Lagos on the Gulf of Guinea via Ilorin and Ibadan in May 1867 .

Rohlfs describes in his work "Across Africa" ​​very vividly the practice of the slave trade, of which he was declared opponent. Nevertheless he treated a sick slave trader from Kordofan in Murzuk . In gratitude for his recovery, this Rohlfs gave a young slave who was about seven or eight years old. That was on December 25, 1865. Rohlfs gave him the name Henry Noël . Since Rohlfs did not want to leave the boy alone, he accompanied Rohlfs on his further journey. Rohlfs later took him to Berlin, where the King of Prussia Wilhelm I had him educated at his own expense.

Rohlfs was not only one of the first Europeans to cross the entire Sahara , his journey from the Mediterranean to the West African coast was celebrated as the second European crossing of Africa ever. Only the Englishman David Livingstone had previously achieved this . In Berlin he was received by King Wilhelm I of Prussia and made an honorary member of the Berlin Geography Society. He received the gold medals of the geographic societies of Paris and London.

The increasing fame subsequently opened many doors for Rohlfs in the political field. In 1867/68 he took part in the British punitive expedition to Abyssinia as an interpreter on behalf of the King of Prussia . He was an eyewitness to the storm on Magdala and processed his experience in his book about the expedition. Rohlfs made height measurements at this company, which he also published in this work. In the same year an expedition also supported by the Prussian royal family took him to Cyrenaica . From there Rohlfs wanted to get to the Kufra oases, which no European had previously traveled successfully. The hostile influence of the Senussi , who saw him as an Ottoman agent, made it impossible for him to put this project into practice. Rohlfs had to change his plans and traveled on to the Siwa oasis . Rohlfs was also accompanied by a photographer on this expedition, so that many of the historical sites there could be documented for the first time.

At that time Rohlfs was so popular that he went on lecture tours not only in Europe, but also overseas. During a lecture tour in Russia, he met in Riga Leontine Behrens (1850-1917), the niece of Africa travelers Georg Schweinfurth know, and married her on 16 June 1870 in Riga after just three weeks of acquaintance. The couple settled in Weimar. His income ensured him a life free of material problems.

During the Franco-Prussian War of 1870/71 Rohlfs traveled to Tunisia as a Prussian agent in order to encourage Algerian Berber tribes to revolt against France. His mission failed because the French defense learned of his intentions early on.

Rohlfs carried out his scientifically probably most important expedition from 1873 to 1874 on behalf of the Egyptian Khedive Ismail Pascha . The khedive financed the expedition with an amount of 80,000 marks. So this expedition was extremely well equipped. Rohlfs wanted to advance from Egypt to Kufra, but this time too the influence of the Senussi prevented him from finding suitable leaders. Rohlfs had to change his plans again and turn off to Siwa. Numerous well-known German scientists belonged to this Rohlfs' expedition: Karl Alfred von Zittel geologist, Paul Ascherson botanist and Wilhelm Jordan geodesist. One focus of the expedition was the exploration of the Dachla oasis and its numerous archaeological sites, as well as the flora and fauna of the oasis and the excavation and documentation of the Deir el-Hagar temple . Another special feature was the engagement of the photographer Philipp Remelé . Remelé took over 150 photographs of the oasis and its inhabitants and was commissioned by Rohlfs to excavate the Deir el-Hagar temple. There is a graffito of the expedition members on a pillar of the temple . 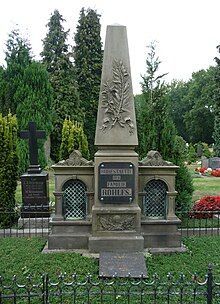 Grave in the Vegesack cemetery in Bremen

In 1878 Rohlfs carried out another expedition from Tripoli on behalf of the African Society . Thanks to the massive support of the Ottoman government, this time he actually succeeded in being the first European to get to Kufra. But there the caravan was attacked and robbed. Rohlfs then had to start the return journey.

In 1880 Rohlfs traveled to the court of King John of Abyssinia as the ambassador of the Prussian king . In 1884/1885 he served as a consul general in Zanzibar for a few months , but showed little diplomatic skill. During his term of office, the German-African “ protection treaties ” fell in what was later to become German East Africa and with the Sultanate of Witu , which led to the conflict with the Sultan of Zanzibar .

Rohlf's particular hobby was a shoe collection, which he completed with examples from all over the world. 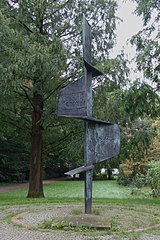 Initiatives for a memorial for Rohlfs in Bremen go back to around 1911. The First World War, the inflation and then the Second World War brought these projects, for which several designs can be proven, to failure. Paul Halbhuber won a tender from 1956 with an abstract Gerhard Rohlfs monument made of bronze that could be interpreted as a signpost and was inaugurated on April 14, 1961, 50 years after the first impetus, in the Fährgrund on Schulkenstrasse in Vegesack .