Henri Duveyrier was the son of the playwright Charles Duveyrier (1803–1866), who worked with Eugène Scribe and wrote the libretto for Giuseppe Verdi's opera The Sicilian Vespers (1855). His mother was a native of Bath , England . Henri grew up bilingual and also developed a pronounced talent for foreign languages. He received his education partly in Germany, first at a boarding school and then at the commercial school in Leipzig . According to his father's wish, he should take up a career in business, but the young man showed great interest in overseas, especially in Asia and North Africa. In addition to his business studies in Leipzig, he also took private lessons in Arabic from the internationally renowned orientalist Heinrich Leberecht Fleischer .

Friends of his father, who supported the political theories of the social reformer Henri de Saint-Simon , directed Henri's interest in the hinterland of the French colony of Algeria . After a first trip to the edge of the Sahara, Duveyrier decided to embark on an expedition to the northern Tuareg , who had been described as friendly by all previous travelers. He contacted the German Africa explorer Heinrich Barth , who was then living in London , in order to be instructed by him. After initial hesitation, Barth agreed and also provided Duveyrier with letters of recommendation to the leaders of the Tuareg, whom he knew personally.

From 1859 Duveyrier made several trips to the Sahara , where he came to Algeria , Tunis and Fessan . Following up on Barth's research on the northern Tuareg , despite his youth he collected a large amount of ethnographic and historical data and made friends with the leaders of the Tuareg ( Kel Ajjer ) in Tassili n'Ajjer (southern Libya), namely with their political leader Ikhenukhen and the religious leader Sidi Uthman, both of whom were long considered friends of Europeans. Further penetration into the Ahaggar Mountains and the Tuareg who lived there failed due to the weakened health of the young researcher, who fell ill with cerebral fever after his return to Algiers and almost died. 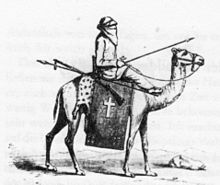 Tuareg warriors in a naively romanticizing view as descendants of a crusader, from the 1st volume of Heinrich Barths Reisewerk

After his recovery, Duveyrier put down his observations in the extensive work Exploration du Sahara (vol. 1: Les Touaregs du Nord , Paris 1864), which is regarded as a model of a travel work, and for which he was awarded the gold medal of the Paris Geographical Society. To what extent the printed text of the Saint-Simonist MP, colonial enthusiast and supporter of Duveyrier, Dr. Warnier, which had been revised, can no longer be determined today.

The work, originally conceived in two volumes, was primarily intended as a source of information for scientists and not - like the travelogues of David Livingstone or Richard Francis Burton - as exciting reading material for the general public. It did not describe the researcher's experiences, but - going beyond Heinrich Barth's example - in three large sections the land, nature and above all the people of Tassili n'Adjer, the Tuareg. Until the early 20th century, when the land of these nomads came under French colonial rule, Les Touaregs du Nord - together with Barths excursions in his five-volume travel book - was the only scientifically useful description of the Tuareg and their culture.

He contributed frequently to the Bulletin of the Geographical Society and also wrote numerous articles for the Annales des voyageurs and the Revue algérienne et coloniale . He also worked with his father on an encyclopedia that was supposed to summarize the knowledge of the time in the sense of the teaching of Saint-Simon. Heinrich Barth could also be won as an expert on African topics, but died in 1865. The death of Charles Duveyrier also meant the end of the ambitious project.

Duveyrier and the colonial expansion of France in North Africa

The Franco-Prussian War of 1870 brought him to Neisse as a prisoner , but thanks to his personal relationships with leading German Africa experts and geographers, he was quickly set free again. Then in 1878 he and Maunoir edited the geographical revue L'année géographique founded by Vivien de Saint-Martin and worked on his Dictionnaire de geographie universelle .

Given his excellent ethnographic and geographical knowledge, the researcher became interesting for the colonial movement in France in the 1870s. The completely unrealistic project of the Chemin de Fer Trans-Saharan , a railway line from Tunis to Lake Chad and from there via Timbuktu to Senegal , was openly discussed and supported by the state and business circles, especially the influential Chamber of Commerce in Marseille . Duveyrier was hired as an appraiser because the railroad was supposed to cut through the northern Tuareg area, but the files of the commission appointed by the Ministry of Transport show that his influence on the decision-making was little.

When an expedition under the command of Colonel Flatters , which was supposed to explore a suitable route, was killed by the Tuareg of the Ahaggar Mountains in the spring of 1881 , Duveyrier was blamed for this. He was accused of drawing a far too positive picture of the desert nomads in his travel book, although this was not true. Furthermore, through his statement, he had prevented the sending of a sufficiently large army column to protect the Flatters expedition and was therefore personally responsible for its demise. The real blame for the disaster lay with the political authorities around the influential transport minister and temporary prime minister Charles de Freycinet . He had hyped the unrealistic project of the Trans-Saharan Railway on the question of national honor and only allowed the supporters to speak at the meetings of the commission without taking note of Duveyrier's critical remarks. After the massacre of the participants in the expedition, Freycinet needed a suitable scapegoat, which he and his entourage found in the poorly assertive Duveyrier.

In the years after the renewed French expansion in North Africa began, he wrote several works on colonial politics, such as La Tunisie (1881) and a polemical treatise on the Islamic Sanussiya movement, to which he wanted to assign responsibility for all xenophobic attacks in the Sahara. On the one hand, the pamphlet fitted well into the intellectual climate of the 1880s, which was characterized by a pan-European fear of an aggressive Islam, on the other hand, Henri Duveyrier believed he could rehabilitate himself and avert further criticism because of the downfall of the Flatters expedition.

In the last years of his life he turned increasingly to Morocco . In 1885 he accompanied a diplomatic mission to the Sultan's court . The explorer Charles de Foucauld , who disguised as a Jew from 1883–1884 explored the hinterland of the Moroccan coast, which is forbidden for Christians, also enjoyed the support of Duveyrier. The travel work de Foucaulds, Reconnaissance au Maroc (1888) was edited by Duveyrier and received the Gold Medal of the Geographical Society.

In view of the personal and professional problems, especially because of the campaign against him over the failed Trans-Saharan Railway, Duveyrier committed suicide in 1892.

Duveyrier was the last exponent of classical African studies, whose focus was on the culture of the African peoples and not on the possible benefits from the results of the research for colonial expansion in the age of imperialism . In this respect, Duveyrier can be seen as the successor to Heinrich Barth, who remained Duveyrier's friend and supporter until his death in 1865. From 1875 Duveyrier got caught up in the whirlpool of colonial political enthusiasm in France, allowed himself to be engaged for these goals, probably also in the hope of a secure professional position, and failed, both professionally and personally.

Henri Duveyrier was an honorary member of the Thuringian-Saxon Society for Geography.