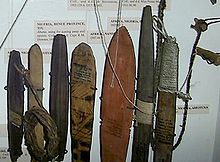 Images of bullroars from Africa

The buzzing device , also known as buzzing wood, ( English bull roarer ) is one of the oldest musical and sound transmission instruments. It belongs to the vortex aerophonic . The buzzing device has its roots in the Paleolithic , as evidence made of ivory , antlers and bones show. The use at that time is unclear: musical instrument, means of communication or ritual instrument, as with the Aborigines .

The buzzing device is a flat, mostly oval piece of wood or bone or the like, 15 to 50 cm in length with rounded edges, which is swung in a circle on a 1 to 2.5 meter long cord. The wood is rotated about itself and the cord is twisted. This creates eddies and the pressure variation of the eddies creates a deep, rising and falling sound that turns into a humming or buzzing sound as the speed increases. The tones are also created by the oscillation of the buzzing body. Its sound is unlike any other musical instrument and depends on the shape of the device and the speed of rotation. The sound, which can be heard from far and wide even in wind, means that communication with this instrument can be carried out over long distances. The typical frequency of the buzzers is around 80 Hz.

The BULLROARER was already in the Upper Paleolithic used, it in Central Europe finds in the city Havelsee at Fohrde in Brandenburg , in Stellmoor from the Ahrensburg culture in Schleswig-Holstein and in the Grotte de la Roche , Lalinde in the Dordogne from the Magdalenian in France are .

The buzzing device was used in a wide variety of cultures from Africa to Asia and Papua New Guinea to Australia and North and South America. In the rituals of African male societies and in obsession cults like Bori and Dodo in Nigeria, the piercing noises of the buzzing device were intended to frighten the women and keep them away from the ritual site. The evoked "spirit" wanted to achieve a similar terrifying effect when he used a voice distortion device (a hollow body with a Mirliton ) for his speeches.

An example of use is shown in the film Crocodile Dundee II (1988). Here the protagonist uses the buzzing device as a means of communication.

Gow wants to identify the Greek Iynx ( ἴυγξ ) or the Roman rhombus as a buzzing device. It can also be a magical instrument that is rotated in place between two strings or serves as a symbol of Eros , as is also shown on Greek vases. Höpfner, on the other hand, identifies it as a top.