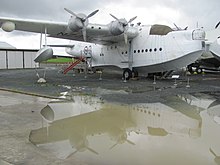 NZ4115 in the Museum of Transport and Technology (MOTAT) in Auckland

The Short S.25 Sunderland was a four-engine flying boat from British production. It was developed as a military version of the airliner S.23 Empire . From 1937 to October 1945 Short Brothers built 749 of these long-range multi-purpose flying boats , which were used by 19 squadrons of the Royal Air Force (RAF) and in the naval forces of other countries. After the Second World War , some copies were converted to the civilian version Short Sandringham .

Even before the S.23 had completed its first flight in July 1935 , the British Air Ministry demanded that it be further developed into a purely military version. The specifications of 1933 provided for a four-engine flying boat that could be used as a sea ​​reconnaissance aircraft . In 1934 the ministry commissioned the construction of a prototype to compete with the Saunders-Roe A.33 . In March 1936 the order was converted into an order for 21 aircraft. Short's chief designer Arthur Gouge was responsible for the implementation. The first flight of the prototype ( K4774) took place on October 16, 1937 from the Medway by J. Lankester Parker.

In the autumn of 1938 the first machines entered service with the RAF Coastal Command . The Sunderland was the most effective British flying boat of the Second World War and was used for sea ​​reconnaissance , anti -submarine defense, for transport tasks and in the sea emergency service. Over 60 German submarines of the Kriegsmarine were sunk by the aircraft. 16 copies were in service with the Royal New Zealand Air Force .

Many of the Sunderlands were deployed on the northern corridor to Berlin during the Berlin Airlift . They started on the Elbe in Hamburg-Finkenwerder and landed in Berlin on the Havel near Lindwerder . In Great Britain it was in active service until mid-1958, in New Zealand the last specimens were retired in 1966.

After the Second World War, 27 Sunderland flying boats were converted into passenger planes and renamed Short Sandringham . The airline BOAC put some of them into service as Plymouth class and used them for transatlantic traffic . Others came into the possession of TEAL and were used between Auckland and Sydney and on different Pacific routes. The NZ4115 is preserved in the Museum of Transport and Technology (MOTAT) in Auckland, one of four that are kept in museums worldwide . The aircraft acquired by Ansett and partly from the inventory of the Royal New Zealand Air Force operated between Sydney and Lord Howe Island . Other users were DNL - Norwegian Airlines , which operated the scheduled service from Oslo to Tromsø with this type of aircraft between 1946 and 1952 , the British Aquila Airways , which operated the flying boats and the like. a. used during the Berlin Airlift and from 1949 to 1956 in the liner service between Southampton and Madeira , as well as the French Transports Aériens Intercontinentaux (TAI), which started a line connection between Nouméa and Bora Bora in 1958 with these flying boats .

The model was designed as a cantilevered shoulder wing in all-metal construction with a normal tail unit. High, spacious hull and two support floats with one step each. The curb weight increased to 16,800 kg by 1944, the maximum take-off weight to 29,550 kg, as the military payload doubled. Of the five series (Mk. I - Mk. V), three were equipped with Bristol Pegasus engines (850 to 1,025  hp ) and two with Pratt & Whitney "Twin Wasp" engines (1,200 hp).

The Sunderland was built in Great Britain at Short in Rochester and Windermere, Short & Harland in Belfast and Blackburn in Dumbarton.

The total number of Sunderland produced was 749 machines. This deviates from the tables below, the source of which is cited with the wrong year of publication, without page numbers and publisher, and in which prototypes are not listed. The deviations affect not only the total number, but also the individual series.