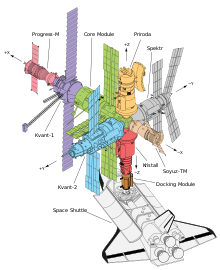 Modules of the Mir space station, to which a space shuttle is currently docked.

The Shuttle-Mir Program comprised eleven missions of the space shuttle of NASA in the years from 1994 to 1998 with the shuttle it to the nine Russian space station Mir docked. In addition, a total of seven US space travelers flew long-term missions on the Mir, each lasting about half a year. The Shuttle Mir program is referred to by NASA as phase 1 of the ISS project. It represented the first extensive cooperation in space between the superpowers USA and Russia since the Apollo-Soyuz project .

After the USA's first projects in manned space travel with the Mercury , Gemini and Apollo programs , which led to the first manned moon landing, NASA began using the space shuttle as the most important means of transport for people into space in 1981. The American moon landings marked the end of the space race between the USA and the Soviet Union and the beginning of a policy of détente in the Cold War .

The first milestone in this direction was the Apollo Soyuz project, in which the first direct coupling of an American and a Soviet spacecraft in orbit came about .

While in the 1970s and 1980s the Soviet Union focused more on the development of large space stations like the Salyut or Mir, the space shuttle project devoured most of NASA's funds. In this respect, even at the beginning of the 1990s - after the collapse of the Soviet Union - US space travel had a deficit in terms of experience with long-term stays in space and the long-term operation and supply of a space station in earth orbit.

This situation, as well as ongoing budget problems in what is now only Russian space travel , formed the breeding ground for the Shuttle Mir program. The good cooperation enabled the USA to gain experience with space station operations, which flowed directly into the development of the American segment of the International Space Station (ISS).

On June 17, 1992 , then US President George Bush and his Russian counterpart Boris Jelzin signed the Agreement between the United States of America and the Russian Federation Concerning Cooperation in the Exploration and Use of Outer Space for Peaceful Purposes (freely translated: "Agreement between the USA and Russia on cooperation in the exploration and use of space for peaceful purposes ”). The main part of this agreement is a "mission by the space shuttle and the Mir station, in which US astronauts and Russian cosmonauts are involved".

The first mission of the Shuttle-Mir program was STS-60 in February 1994, during which Sergei Krikalev, a Russian cosmonaut, flew a shuttle for the first time. STS-60 has not yet approached the Mir station, this was not the case until the next Shuttle Mir mission, STS-63 , when the Discovery approached the space station to within 12.2 m in February 1995, but without docking . On March 14, 1995, Norman Thagard became the first US astronaut to fly with the Russian spacecraft Soyuz TM-21 to the Mir space station and spent about four months there.

On June 27, 1995 the time had finally come: The Atlantis took off on the STS-71 mission for Mir. It docked with the station two days later and stayed docked for six days before returning to Earth. The crew of the Mir was exchanged.

During the next mission, STS-74 , a special shuttle docking module (SDM) was delivered to Mir, with which the docking maneuver was significantly simplified. The SDM was developed jointly by Russians and Americans and is the first internationally manufactured space station module.

The next shuttle missions served to bring a US astronaut to the Mir for a long-term stay or to pick it up again. In addition, guests from France ( Claudie Haigneré and Léopold Eyharts ) or Germany ( Reinhold Ewald ) were on board the Mir during the exchange of the Russian crew .

The Shuttle Mir program ended in June 1998 and was replaced by the cooperation on the construction of the International Space Station .