Aerial view of the palace complex

Laer Castle is a moated castle west of Meschede . The property was first mentioned in the 13th century. At this point there was a medieval low castle , which was converted into a castle in the 17th century after it became the property of the von Westphalen family .

South-west side of Laer Castle

The history of the Laer settlement, consisting primarily of the Schulten Hof and the Wulfes Hof, from which the Laer House was later to emerge, goes back to the 8th century. The first secured news about the Wulfeshof comes from the year 1268. In a document, the abbess of the Meschede Monastery Agnes von Arnsberg proclaimed the purchase of goods at Laer and Druvethe near Eversberg. In 1314 the Meschede monastery owned both farms. With the Wulfeshof the lords of Hückelheim were from the pin invested .

In the Middle Ages, a moated castle was built in the valley near the Ruhr. Only a few remains of the original castle have survived. A part was integrated into the later castle.

After the family died out in 1449, Hennekin von Berninghausen inherited it . Since he remained childless, he bequeathed the village of Hückelheim and the associated allodial property to the Galilee Monastery in 1483 . The Laer estate was not affected as it was a fiefdom of the Meschede Monastery. The property initially remained with other members of the von Berninghausen family. After the death of Johann von Berninghausen there were inheritance disputes, which led to the fact that the property passed to Johannes von Overlaker in 1582.

In 1602 the property was bought by Heinrich von Westphalen , who was Paderborn's court master at the time . In 1610 he bought the Schultenhof and two cottages . Since then, the plant has been owned by the von Westphalen family.

During the Electoral Cologne period , ownership of the court was linked to freedom from treasure and the eligibility for state parliament .

In 1776 the sovereign, Elector Maximilian Friedrich of Cologne, allowed the owner to build a stone bridge over the Ruhr near Laer and to raise a bridge fee for its use after completion.

The historically most important owner in the 19th century was Clemens August von Westphalen zu Fürstenberg , who campaigned for the release of the Archbishop of Cologne Clemens August Droste zu Vischering in connection with the Cologne event and temporarily left Westphalia after conflicts with the Prussian state.

From October 1944, the castle was the seat of a military staff that was responsible for the V2 rockets . The construction of launch ramps near Meschede began, but because of the advance of the Allies it was no longer used. At the end of the war the facility was looted.

Partly used as a rest home until the 1960s, the castle is still inhabited today by the family of the Counts of Westphalia.

View of the entire complex of the palace complex from the west.

Cadastral plan of the entire complex (in the west the economic building. The main house is surrounded by a moat. In the east the Ruhr with the iron footbridge. In the south, the chapel is somewhat separated)

The Renaissance and later Baroque style castle, which has largely been preserved to this day, was built in 1606/1608. It was given its present form through further additions into the 18th century. The first completion in 1669 was the construction of the baroque portal and the Welsh dome of the tower. The originally three-storey building had a stair tower and a side pavilion extension.

Other significant changes took place in the 18th century. In the literature, the time is given as around 1764. However, since a painting from 1725 already shows the subsequent condition, the renewed conversion must have been essentially completed by this time. The pavilion-like extension in the east, which has existed since the early 17th century, was given a counterpart in the west. The entire building was reduced by one floor and a mansard roof was added. In the 1760s, Friedrich Wilhelm von Westphalen , then Prince-Bishop of Hildesheim, built the outer bailey and the farm buildings. This complex is symmetrical and consists of one-story parts and two-story pavilions with mansard roofs. The two-storey gatehouse is aligned in such a way that, together with an avenue and the tower of the manor house, an optical main axis is created.

The mansion was redesigned again in 1893, especially inside. The spiral staircase previously located in the stair tower has been replaced by a wooden staircase in the entrance hall leading to the upper floor. Iron girders were used to increase the height of the main hall. The hall was then given a stucco ceiling based on the model of Adolfsburg Castle . The stucco on the walls and a fireplace with the Westphalen-Ledebur coat of arms still date from the 17th century. At the beginning of the 20th century a riding arena was built, which has some Art Nouveau elements.

Chapel and statue of Liborius

Look into the chapel

Coat of arms in the chapel

In the 17th century, the palace chapel dedicated to St. John the Baptist formed the northeast corner of the outer bailey. It is a 14 × 10 m hall building. It is possible that the origins of the chapel date back to the Middle Ages. According to other sources, it was only built in the 17th century. At least the end and buttresses, the facade with the curved gable and the facade can be dated from this period. There is evidence that the chapel was consecrated on September 18, 1645. The coat of arms of the Westphalen-Löwenstein family was made in 1610. On the right is the grave slab of Lucia Elisabeth von Ledebur, who died in 1725 at Gut Laer. In 1767, Prince-Bishop Friedrich Wilhelm von Westphalen redesigned the interior of the chapel. During this time the roof turret was renewed. Inside you can see a stucco ceiling from the 18th century. Noteworthy is the altar with a painting of the baptism of Jesus by John the Baptist and statues of Saint Liborius and Saint Godehard . The altar is considered a major work by the Paderborn court painter Anton Joseph Stratmann . Holy Mass is still regularly celebrated in the chapel today. In 2003 new glass windows were partially installed. Originally located in the park of the castle, but torn out of this context by the construction of the railway, a statue of Saint Liborius made in 1763 stands nearby. 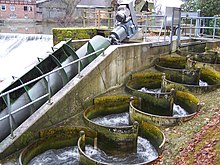 Weir with hydropower screw and fish ladder at Laer Castle

A floating iron bridge was built over the Ruhr in 1839. The first plans for a construction spanning the river came from Johann August Röbling , who later emigrated to the USA and built and planned numerous large iron bridges there, such as the Niagara Falls Suspension Bridge and the Brooklyn Bridge in New York City . Röbling planned a bridge over the Ruhr near Freienohl around 1828. However, the project was not carried out. However, the architect A. Bruns resorted to the plans and built a pedestrian bridge at Laer Castle in 1839 on behalf of the Count of Westphalia. This is considered to be one of the first of its kind in Germany. It was used as a pedestrian bridge until the beginning of the 21st century. The bridge is the only one of its kind in Europe that has been preserved in its original substance. It is therefore a special technical cultural monument. It was renovated until 2003 with funds from the Monument Protection Foundation. It was badly damaged by Hurricane Kyrill and has so far only been secured provisionally.

Tower ruins on the Buchholz

In the course of the renovation work in 1764, a lookout tower ("Wartturm") was built some distance from the castle, reminiscent of medieval models. The building was connected to the palace complex by a park. The Laer tower ruins are now in the middle of the forest. Earlier ogival window openings have long been walled up. The building is one of the few and particularly early examples of neo-Gothic influences from England that are present in Westphalia. The former crenellated tower originally gave the impression of being the last remnant of an old castle. This ruin character was typical of the English gothic garden architecture. In contrast to baroque parks, for example, the tower was not located in the axis extension of the road leading to the castle, but slightly offset from it.

Castles and palaces in the Ruhr valley