House Horst from the northwest

The house Horst , also castle Horst called, is a former knight's seat on the northern banks of the Ruhr high above the river in Essen district of Horst . It stands as construction and as a ground monument under monument protection .

The exact time when Haus Horst was built is unknown. It is possible that it was a successor to the immediately neighboring Vryburg , but this assumption has not yet been scientifically proven. Both systems are located at an old ford over the Ruhr at a junction of the Hellweg, which was important in the Middle Ages . Maybe you should control and protect them.

The family of the Lords of Horst has been documented since the 12th century. Their member Heinrich von Horst is mentioned in 1280 as Drost of the Counts of Berg . In 1282 his brother Hugo is occupied as marshal of the Essen princess Berta von Arnsberg . The family had risen to the rank of ministerial , which corresponded to the rank of a non-free knight . This made her one of the most important families in the area of ​​the Reichsstift Essen . The aristocratic residence Haus Horst is only mentioned in documents from the 14th century, before a rural property stood on the area.

After the Lords of Horst had died out around 1400, the facility subsequently saw changing owners. In 1457 it came to Bernd von Voerst and was later owned by the von Schüren family. From 1644 to 1652 it belonged to Alexander II von Velen , who had become too prosperous during the Thirty Years' War . In 1663 it passed to Johann Heinrich von Ree (r) de before Jobst Dietrich Freiherr zu Wendt became the owner in 1674.

At the beginning of the 19th century the facility belonged to a member of the "Wendt auf Hardenberg " family, who leased it to Friedrich Wilhelm Fürchtegott Niemann. His son Friedrich Ludwig had today's Villa Vogelsang built on the western site of the knight's seat in 1840 . The property was auctioned to the entrepreneur Wilhelm Vogelsang in 1910 and remained in his family until the 1970s.

In 1934, under Ernst Kahrs , director of the Ruhrland Museum , additions and restorations were made to the southern part of the former outer bailey before it was redesigned in 1945.

The industrialist Hans-Dieter Abring acquired house Horst in 1980 and founded the "Photo Museum Burg Horst", whose collection of exhibits such as a camera obscura and magic lantern and cameras in 1839 and pieces of three-dimensional photograph includes. It can be viewed by appointment.

Ruin of a defense tower

The system measures around 150 × 150 meters today. Only a part of the historical structure has been preserved. These include, in addition to previously unexplored remains of vaults and walls in the ground, two round towers and the circular wall of the outer bailey, which dates from around the 17th century, in the east of the area, which is also called the tournament courtyard . The former dairy has also been preserved. Its L-shaped building in the Renaissance style dates from around 1680 and is said to have been built with the stones of the ruined main castle . It measures about 32 meters in length and is closed by a hipped roof, which is provided with a ridge turret on the shorter south wing .

The former chapel from 1359 joins the dairy to the northwest. The small sacred building has a Romanesque vault, pointed arched windows and a - today walled - round arched portal . Like the dairy, the chapel is now used for residential purposes.

About 100 meters north-west of Haus Horst, the so-called Mordstein - a low stone cross with an inscription - reminds of the builder Conrad Fischer who was murdered by robbers on May 4th, 1717 . The cross has been a listed building as an independent monument since August 2008. 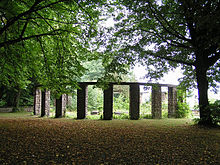 To the south of Haus Horst there is a monument in the form of a ring of brick steles , the so-called Ruhr Warrior Memorial . It was erected in 1934 by the National Socialists on the initiative of retired General Oskar von Watter to commemorate the members of right-wing Freikorps , resident services , Reichswehr and police units who died between 1918 and 1920 in the fighting against striking and revolutionary workers and in the suppression of the Ruhr uprising .

The property was made available by Wilhelm Vogelsang. With the help of the Reich Labor Service , which was still voluntary at the time , the required Ruhr sandstone was extracted from the neighboring Silberkuhle quarry. The circular shape of the memorial designed by the Essen architect and former leader of the Essen Rescue Service Paul Dietzsch (1875–1943) was intended to remind of the Stonehenge , which was still quite unknown in Germany at the time . Today the square is a memorial for the disputes over the establishment of the first republic in Germany and commemorates the victims on all sides.

Castles and palaces in the Ruhr valley