The seventeen (17) is the natural number between sixteen and eighteen . It is odd and a prime number . 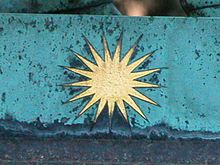 Seventeen is the seventh prime number and the third Fermat number . It is also the exponent of the sixth Mersenne prime number .

Carl Friedrich Gauß discovered at the age of nineteen that the representation of the number 17 as a Fermat prime number made it possible to construct the regular seventeenth-corner with a ruler and compass .

Seventeen is the number of crystallographic groups in the plane (i.e. the two-dimensional counterpart to the 230 space groups in the three-dimensional). All of these 17 symmetry forms are artistically realized in the decorations of the Alhambra .

Also, seventeen is the second generator number; from it you get the cyclic number 0588235294117647, the digits of which when multiplied by any natural number from 1 to 16 only form another cyclic permutation .

Pythagoras hated 17 because it separates 16 from her Epogdoon .

In Italy the seventeen has a meaning corresponding to the thirteen in other countries as an unlucky number; the traditional unlucky day is Friday the seventeenth. In Italy there is often no 17th floor in buildings; many aircraft, e.g. the Alitalia , are missing a 17th row. The French automaker Renault sold its R17 model in Italy as the R177 .

The unhappy character of the seventeen in Italy is interpreted from an anagram of the Roman number seventeen (XVII) to VIXI , which in Latin means I have lived (1st person perfect), so I am dead . The 17 is also associated with the number of one of the three Roman legions (XVII, XVIII and XIX) that were defeated by the Cheruscans during the Battle of Varus . While this reference has been forgotten for 18 and 19, the peculiarity of the Italian way of counting from sedici to diciassette testifies to the peculiarity of this number.

In addition, according to Genesis 7:11 , the flood is said to have started in the six hundredth year of Noah's life, in the second month, on the seventeenth day of the month . Another explanation is the fact that the seventeen, if the first digit is a little smaller and written out under the second ( 1 7), is supposed to resemble a gallows with a hanged man.

“Go to 17” is a humorous paraphrase that is widespread among colleagues in retail and means going to the toilet.

“ Trick 17 ” describes solutions to problems that are original, special or just amazing.

The (beer) bottle opener is colloquially referred to as a “seventeen key” or “17 key” (actually a tool wrench with a width of 17 mm), especially for locksmiths, mechanics, plumbers and related professions.