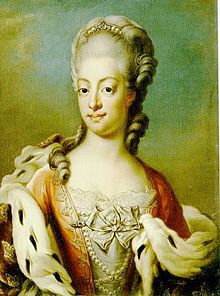 Sophie Magdalene of Denmark ( Swedish Sofia Magdalena ; born July 3, 1746 in Copenhagen ; † August 21, 1813 at Ulriksdal Castle near Stockholm ) was a princess of Denmark and, by marriage, Queen of Sweden .

She was the eldest daughter of King Frederick V of Denmark and the British Princess Louise . She lost her mother at the age of four.

In 1766, the year her father died, she was in Stockholm with the Swedish King Gustav III. married.

She was extremely religious and very shy, which earned her the mockery of her cultivated husband, who valued lively and witty women. Sophie Magdalene was considered unintelligent, which was certainly not the case - besides her Danish mother tongue, she spoke Swedish, English and French. She particularly suffered from the rejection of her mother-in-law Luise Ulrike von Prussia , a sister of Frederick the Great .

The marriage with Gustav III. was not completed until 1777. At the end of the seventies the king had plans for divorce, which he wanted to justify with Sophie Magdalenes alleged sterility. However, his personal physician refused to issue a corresponding certificate and drew the king's attention to the fact that Sophie Magdalene could possibly have children if she remarried. Thus Gustav III. stood there as a liar or incapable of childbearing - in the face of this prospect he rejected his plans for divorce. About the married life of Gustav III. and his wife has been much speculated. When Crown Prince Gustav Adolf († 1837) was born in 1778 , rumors arose that court official Adolf Fredrik Munck was the child's father. In all likelihood, these rumors are incorrect.

After the death of their second son, Karl Gustav (1782–1783), the couple's relationship finally cooled off. Sophie Magdalene withdrew more and more from the public and lived unnoticed at the Swedish court until her death.