St. Vit is a formerly independent place in North Rhine-Westphalia , which has belonged to the town of Rheda-Wiedenbrück in the Gütersloh district since the municipal reform of 1970 . The place is 1,037.45 hectares and has around 1,400 inhabitants (2014). The place, first mentioned in 1212, is rather rural and became known for its baroque church, which is unique in its kind in the East Westphalian region .

The parish of St. Vit was formed in 1867 by a spin-off from the parish of Langenberg , among other things at the endeavors of the then mayor Sören Neitemeier .

On January 1, 1970, St. Vit was incorporated into Rheda-Wiedenbrück. 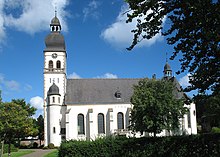 There is a fire station in the north of St. Vit . St. Vit is also the location of the district fire brigade school of the Gütersloh district.

The association organizes an annual charity run for the benefit of DKMS and outpatient palliative care in Bielefeld-Bethel . The association was founded at the end of 2005.

In 2007, citizens of St. Vit launched a program against the wind turbines that had almost been decided by the city council . An association was involved in public meetings in the fire station against the alternative energy source of wind power and demanded the cancellation of the construction plan, which was already fixed at this point.

Hermann Schalück , the General Minister of the Franciscans and President of the International Catholic Missionary Organization until 2008 , and the former chairman of the FC Schalke 04 Josef Schnusenberg come from St. Vitus . The historian Franz Flaskamp (1890–1985) also came from St. Vit .