This article covers St Andrews Castle in the town of the same name in Scotland. The Device Fort St Andrew's Castle in England can be found here . 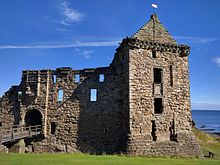 St Andrews Castle from the front

St Andrews Castle is a ruined castle in the small coastal town of St Andrews in the Scottish county of Fife . The ruin is on a rocky headland above a small beach called Castle Sands on the adjacent North Sea . A castle has stood there since the time of Bishop Roger (1189–1202), son of the Earl of Leicester . This is where the city's rich and powerful bishops lived, while St Andrews had been the ecclesiastical center of Scotland since the years before the Reformation . In their Latin charters, the Archbishops of St Andrews described the castle as their palace and drew it with the words "apud Palatium nostrum".

The castle grounds are now managed by Historic Scotland . You can get there through a visitor center where the history of the castle is presented. Some of the best preserved sculpted fragments of the castle are on display there. There is also a souvenir shop there.

During the Scottish Wars of Independence , the castle was destroyed and rebuilt several times; Ownership changed frequently between the Scots and the English . Soon after Berwick-upon-Tweed was sacked by the troops of Edward I of England in 1296 , the castle was captured by the English and prepared for the visit of the English king in 1303. But in 1314, after the Scottish victory at the Battle of Bannockburn , the Scots recaptured the castle and Bishop William de Lamberton , Guardian of Scotland and loyal supporter of the Scottish King Robert the Bruce , had it repaired. In the 1330s, the English conquered St Andrews Castle again and strengthened their defenses in 1336, but this was of no use. Sir Andrew de Moray , Governor of Scotland in the absence of King David II , took it again after a three-week siege. Soon after, in 1336 and 1337, it was destroyed by the Scots so that the English could not use it as a fortress again.

St Andrews Castle remained in ruins until Bishop Walter Trail had it rebuilt at the turn of the 15th century. His castle is the basis of what can be seen today. He completed the construction work around 1400 and died in 1401 within the walls of his new castle.

Several well-known men spent time in the castle in the following years. King James I (1406–1437) received part of his education from Bishop Henry Wardlaw , who in 1410 founded the University of St Andrews . A later resident, Bishop Jakob Kennedy , was the faithful advisor to King James II (1437–1460). In 1445 King James III. born in the castle.

Use as a prison

In those years the castle was also a notorious prison . The dungeon is a dark, unventilated hole carved out of the natural rock under the northwest tower. There sat local evildoers who came under the jurisdiction of the bishop, as well as various more prominent inmates such as 1402 David Stewart, 1st Duke of Rothesay , 1425 Murdoch Stewart, 2nd Duke of Albany , and Archbishop Patrick Graham , believed to be insane and imprisoned in his own castle in 1478.

During the Scottish Reformation, St Andrews Castle became a center of religious persecution and disputes. The Scottish reformer John Knox wrote of the dungeon: "Many of God's children have been imprisoned here." In 1521, James Beaton , then Archbishop of Glasgow , was also named Archbishop of St Andrews and moved into the castle. Beaton had the defenses modified so that the castle could withstand a heavy artillery attack , which was feared when tensions between the English Protestants and the Scottish Catholics grew. In 1538 James Beaton was succeeded by his ambitious and wealthy nephew, David Beaton . Cardinal David Beaton's pronounced opposition to the marriage of Maria Stuart with Prince Edward of England (later King Edward VI. ), The son and heir of the English King Henry VIII , ensured that in 1544 new battles flared up between the two peoples.

Beaton's coat of arms on a shield, believed to have been removed from his private quarters in the castle.

Scottish Protestants were increasingly viewed as dangerous turncoats who made common cause with the English. In 1546, David Beaton had the Protestant preacher George Wishart (1513–1546) locked up in the castle's Sea Tower and burned at the stake in front of the castle gates on March 1st. Today his initials remind of the place of his death. In May of the same year, Wishart's friend conspired against the cardinal. On May 26, the rebels gained access to the castle by posing as masons when construction was in progress. After overpowering the garrison, they murdered Cardinal Beaton and left his body hanging from a window on the front facade of the castle.

After the murder, the Protestants sought refuge in the castle and formed the first Protestant congregation in Scotland. A long siege of St Andrews Castle was ordered by the Scottish ruler, James Hamilton, 2nd Earl of Arran . In October 1546 the attackers tried to undermine the castle, but the defenders successfully dug a counter mine. Both the attacker's mine and the countermine were chiseled through solid rock. They were rediscovered in 1879 and are now open to the public. Lord Arran heard that an English army was on the way to relieve the castle and asked Lairds of Fife, like John Wemyss , to come on November 4th, 1546, and bring their followers and any artillery that might be suitable for an invasion from the sea to resist. Even if the English King Henry VIII made plans to support the Protestants in the castle, the invasion was never realized and his son, Edward VI, sent no help. 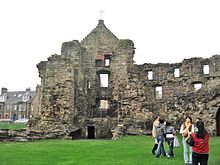 View from the courtyard of St Andrews Castle

During a truce in April 1547, John Knox went to the castle and served the garrison as a preacher until the end of the siege. For a time, Knox was allowed to go from the castle to the town's parish church to preach there. This peaceful interlude came to an end when a French fleet arrived and brought in the Italian engineer Leone Strozzi , who launched a destructive artillery bombardment to drive out the Protestant Lairds. The Lairds knew an expert was at work when their own Italian engineer watched a cannon pull into position with ropes instead of exposing the occupiers to enemy fire. Guns were also placed on the St Salvator's Tower and the tower of St Andrews Cathedral . One of the largest Scottish cannons was called Thrawynmouthe . St Andrews Castle soon became defensible - within six hours, according to Robert Lindsay of Pitscottie . The defeated Protestants were led away: some were imprisoned in France, while others, including Knox, were sentenced to service in the galleys .

After this Protestant defeat, St Andrews Castle was established at the behest of Archbishop John Hamilton , illegitimate brother of James Hamilton, 2nd Earl of Arran , and successor to Cardinal Dr. David Beaton as imperial administrator, rebuilt. But after his death in 1571, the castle was mainly inhabited by a number of constables . In 1606 the Scottish Parliament separated the castle from the Archdiocese and lent it to the Earl of Dunbar , who had been constable there since 1603. In 1612 the castle was returned to Archbishop '' George Gladstanes '', but further attempts by the archbishop to get his former lands back failed. With the following Reformation in Scotland, the office of bishop became more and more emaciated, until it was finally in 1689 by the English King William III. was abolished. Without its previous function, the castle quickly fell into disrepair. In 1656 it was so dilapidated that the city administration ordered the use of its building materials to repair the pier. The most important remains are part of the south wall with a tower with a square floor plan, the dungeon, the kitchen tower, and the underground mine and its countermine.