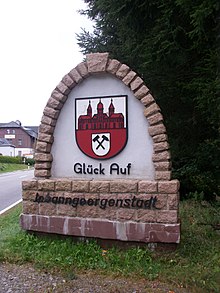 The establishment of the place goes back to mining in the 16th century. It was first mentioned in a document in 1530. The houses of Sauschwemme with an excursion restaurant also belong to Steinbach . On December 17, 1951, Steinbach was incorporated into Johanngeorgenstadt.

At the end of July 2005, a strong storm caused an enormous wind break in the forests around Steinbach. 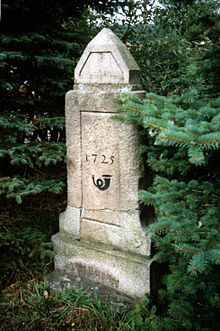 Mining and smelting of ore

Steinbach was particularly well-known in the past due to its importance for mining in the Upper Ore Mountains, because some of the most important Seiffen factories in the Electorate of Saxony were located here. It is well known that ores were not mined through tunnels and shafts in a Seiffen or washing works, usually not even with mallets and iron , but the ores are washed out of the loose ore-containing rock or from the ore-containing earth with relatively little effort.

In the past not only gold and tin were extracted by Seiffenwerke , because precious or semi-precious stones, tungsten, cobalt etc. were also found as by-products. These findings in particular ensured that Steinbach and the surrounding area also found entries in the so-called Venetian or whale books, which were still eagerly traded in the 18th century. Such treasure books attracted many gold diggers to the Upper Ore Mountains, because as a Seifner any person could work wherever they wanted. Only when you had won two to three hundredweight of pewter did the Seiffen mine have to be muted at the Johanngeorgenstadt Mining Authority (before 1662 at the Eibenstock Mining Authority ). Then, as a rule, a measured area of ​​100 laughs in length and 50 in width was assigned. This was then the real treasure trove, including the upper and lower dimensions.

In Steinbach and especially in the neighboring boar pond , tin barley and stone (Seiffenstein) were mainly extracted. Usually several treasure trove owners had joined forces with their Seiffenwerke in order to share the costs incurred. At the beginning of the 19th century, three consolidated Seiffen buildings were still in operation in Steinbach, bearing the names Die 600, 700 and 900 Lachter Seifen zu Steinbach . All three Seiffen were administered by a single shift supervisor.

In the 16th century there was a tin smelter in Steinbach, which belonged to the city council in Eibenstock and was given as a fief by the Lords of Tettau as owners of the Schwarzenberg estate. It was moved to Neumarkt in Eibenstock in 1574.

Sebastian Unger became famous in 1737, who delivered an aquamarine the size of three lots to the Saxon court in Dresden and received 10 thalers as compensation.

The local history also includes the impact of a meteorite on June 2, 1694, which caused a lot of damage in connection with an earthquake and thunderstorm in the area. 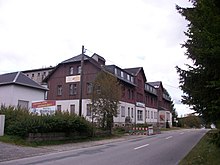 Since the decline of mining, forestry and tourism, which developed at the end of the 19th century, have been the two main sources of income for Steinbach. The Steinbach inn , located not far from the road bridge over the brook that gives it its name, was the oldest pub and lodging facility in town. After the half-timbered building burned down at the beginning of the 20th century, it was replaced by a new building that was expanded several times and is now used as the Pension & Gasthof Steinbach .

In the 1890s, the Hotel Waldfrieden was built on the outskirts of the village in the direction of Sauschwemme , which is now closed after several changes of ownership. The third inn was the Gasthof Waldesruh in Steinbach .

Signposted hiking trails lead to the Auersberg, in the Steinbachtal and to the Riesenberger houses . A border crossing at the Farbenleithe near Jugel can be used by ski hikers in winter to reach the Czech ski route in the direction of Horní Blatná or Jelení . In addition to several private landlords, the inns "Gasthof Steinbach" and "Waldesruh" are located in Steinbach . Worth seeing is u. a. The Saxon quarter milestone No. 55 on Poststrasse from Leipzig to Karlsbad from 1725.