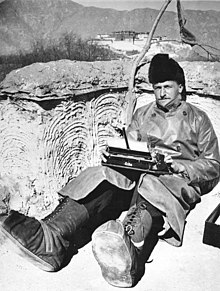 One of the most famous and cruel Nazi crimes was uncovered in 1946 under the name of the Strasbourg Skull Collection . As part of race research , 115 people were selected for the murder in Auschwitz concentration camp . 86 people subsequently died in the gas chambers of the Natzweiler concentration camp . The corpses were to be prepared for a museum project for a racial anthropological study. The main perpetrators were Bruno Beger , Heinrich Himmler , August Hirt and Wolfram Sievers .

The anthropologist Bruno Beger, who was employed as a race examiner in the SS Race and Settlement Main Office , was one of the participants in the German Tibet expedition in 1938/39 under the direction of Ernst Schäfer and under the patronage of Heinrich Himmler. After the return of the participants, Wolfram Sievers, head of the Research Association for German Ahnenerbe, founded the Inner Asia and Expeditions Research Center in order to be able to evaluate the results of the expedition. As part of this undertaking, Bruno Beger dealt with the assumption that was common at the time that the origins of the European race lay in Tibet. This thesis was spread among others by Immanuel Kant and Johann Friedrich Blumenbach .

On December 10, 1941, Beger Sievers proposed a habilitation project entitled “The migration routes of the Indo-Europeans due to the remnants of the northern race”, in which he wanted to anthropologically prove the migration movements for which he believed he had found clues in Tibet. Members of the ethnic groups between Tibet and Northern Europe, where Beger wanted to prove the migration movement, might have been able to measure the body and head. But Beger wanted to first create a positive model of the head of the living test person by taking an impression of the head and then cut off and skeletonize the head. He wanted to capture the differentiations between the cranial skeleton, fatty tissue, muscles and skin.

Stamp of the University of Strasbourg 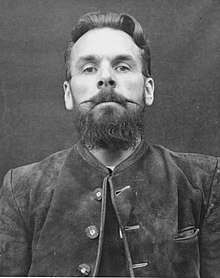 Wolfram Sievers at the time of the Nuremberg medical trial.

After Beger, as war correspondent , had learned of the commissioner's order , he wanted to make use of it. Among the relatives of the soldiers and the political commissars of the Red Army were numerous ethnic groups who came from the Soviet republics between the Middle East and the Caucasus , such as Uzbeks , Kazakhs , Tajiks , Turkmens and Kyrgyz people . Since the order provided for the murder of the “Jewish-Bolshevik commissioners” of the Red Army directly behind the front, Beger wanted to keep their heads. " Jewish Bolshevism " was a political propaganda term. The Wehrmacht opposed this elaborate selection of ethnic groups, the severing of the heads and sending them to the Reich in preservation containers. Shortly afterwards, with Beger's participation, the "K command" was set up. This comparatively large expedition to the Caucasus with 150 participants, many vehicles and even its own aircraft, was brought into being with Beger's cooperation. The “Human Department” was intended for him with the aim of “racial total exploration of the Caucasus”.

In Auschwitz, however, he found only 4 inner Asians who met his expectations. The historians Peter Mierau and Wolfgang Kaufmann have shown that Beger had embarrassed himself at Himmler when he returned from Tibet without evidence for his theses. In order not to have to return again without results and to finally lose Himmler's favor, he selected 115 people, 109 of whom were listed as "Jews" and began to measure them. After Beger left due to a spotted fever epidemic, Sievers began improvising and the plan got out of hand. The 86 people whom Beger had not yet measured were deported to the Natzweiler-Struthof concentration camp and murdered there in a hastily improvised gas chamber.

The Natzweiler-Struthof concentration camp was not an extermination camp , but a labor camp , which is why there was no “regular” gas chamber and, until October 1943, no crematorium barracks either.

August Hirt, who was neither personally nor through employees involved in the selection of the victims, went to the cure in Styria during the murder and subsequent conservation of the bodies of the victims . Since the impression material ordered from the monopoly representative in Berlin for the required impression material (Apotela AG in Zurich ) did not arrive after the murder of the victims , the corpses had to be preserved in another way. The introduction of 10 liters of preservative fluid caused the corpses to swell so much that it was impossible to take an impression of the “normal” head. At that time, the anatomy department only had three corpse cooling compartments and was not able to accommodate so many other corpses in addition to the regular corpses for medical training. The corpses were worthless to Beger. Until shortly before the arrival of the Allies in Strasbourg, Hirt no longer dealt with the foreign corpses that had not passed into the possession of his institute.

When Strasbourg was liberated , 86 bodies were discovered and buried in the Jewish cemetery in Strasbourg-Cronenbourg in 1951 .

Through his research, Hans-Joachim Lang was able to decipher the identities and résumés of the 86 victims murdered in the Natzweiler concentration camp and publish them for the first time in 2004.

The remains of some of the 86 murdered people were only found in the university's anatomical institute when the university city of Strasbourg was liberated. However, at this point in time the heads were missing from a total of 70 dead. On the basis of various lists and the records of a French investigative commission, which was oriented by Henri Henripierre on the processes in the anatomy, it can be traced whose corpses were wholly, partially or not at all destroyed. Hirt's plans for a historical skull collection only became known during the Nuremberg Doctors' Trial , which began in December 1946. In the same year the bodies were buried in a collective grave in the Jewish cemetery in Strasbourg.

On May 8, 1968, the then attorney general Fritz Bauer presented an indictment in which he revealed the plans for the museum by Hirt and Beger. Bruno Beger was sentenced to three years' imprisonment for aiding and abetting community murder, which was the minimum sentence, since according to the court he was not considered the (co-) author of the skull collection. Heinrich Himmler and August Hirt were named as responsible, but they had already committed suicide in 1945.

It was only in 2018 that it became public that the planned museum, for which the Near Eastern victims had been murdered, contrary to existing assumptions, was not to be built in Strasbourg, but was intended for another exhibition. No evidence has yet been found for building plans and budgeting for an exhibition in Strasbourg. Beger's greatest success during the Nazi era was his participation in the "Tibet Show" in the Haus der Natur in Salzburg . From 1938 to 1945 the famous museum was integrated into the SS Ahnenerbe as a research facility . The dioramas with life scenes of Tibetans exhibited there to this day attracted crowds. Himmler planned to build more nature houses across Germany based on the model of the serious museum. There should also be shown theories of descent within the framework of natural history. Beger planned to make his habilitation project vivid in a museum exhibition by taking impressions of ethnic groups along the migration movement he suspected in the form of lifelike dioramas. The exhibition visitor should be able to wander virtually from Tibet to Northern Europe and observe how the appearance of the respective local population changes. At the beginning of 1944 Sievers began to make preparations for this project. However, the procurement of foreign currency for the purchase of the molding compounds dragged on until shortly before the collapse of the Nazi regime, so that it was not realized.

The historian Julien Reitzenstein praised in his book “The SS Ahnenerbe and the Strasbourg Skull Collection” , published in 2018 : “The fact that Hans-Joachim Lang succeeded in raising the suffering of the victims so strongly into the public consciousness and their Preserving memories is honorable and gives great credit to the author. His book is indispensable for the moral evaluation of one of the most inhuman Nazi crimes. ”“ However, “The Names of Numbers” is a non-fiction book, it is not a scientific study. Therefore one does not have to expect any source criticism in scientific depth from Lang. "

In 2004, Lang assumed that August Hirt had intended to set up a "museum with dead Jews as exhibits" (Lang) in Strasbourg. He considered Beger to be a marginal figure, among other things because he had ranked below shepherd. Reitzenstein checked the sources of the crime and refuted the assumption with reference to the personal files of both perpetrators. He also replies that Lang does not provide evidence at key points or that he reproduces sources in a manipulated manner. Reitzenstein points out that none of the numerous sources prove that Hirt, unlike most German anatomists, ever dealt with Jews. Likewise, no scientific goal is proven what Hirt wanted to show in these skeletons, while there is numerous correspondence available for his other research areas that was sufficient for his conviction as a war criminal. "It could be shown that both Hirt and Beger played a significant role in the execution of the crime and yet were never adequately convicted."

Sven Felix Kellerhoff wrote in Die Welt that Henripierre could hardly be seen as a neutral contemporary witness. In addition to his application for German citizenship and his commitment to the Nazi state, the fact that he was paid by the SS was a burden. Reitzenstein noted that the story of an alleged Hirt project with skeletons of dead Jews goes back exclusively to Henripierre and that there are no other sources. In contrast, Beger's actions in Strasbourg are part of a chain of actions that continued from 1938 to 1945.

At the beginning of 2019, Lang justified his approach in an article in the FAZ and reported that historians Michel Kater and Reitzenstein were wrong in their assessment of the skull collection. Thereupon Reitzenstein replied in the Neue Zürcher Zeitung and pointed out manipulated documents in Lang's book. In mid-2019 Reitzenstein went into detail on Lang's contribution in the FAZ. He wrote that Lang also misled his readers in his newspaper article by manipulating the reproduction of sources. Using five examples, Reitzenstein showed that Lang spread untrue claims. Reitzenstein puts all contributions to this controversy side by side on the book's homepage.

Shortly before, Lang had greatly expanded his book. Most of the points criticized by Reitzenstein were corrected. However, Lang still holds on to Henripierre's credibility and continues to attribute the project to Hirt. However, the book has so far only appeared in a French version translated by Valentine Meunier, not in German. Apart from this difference regarding the authorship and aim of the crime, Lang and Reitzenstein now come to similar conclusions regarding the course of the crime. Lang approaches Reitzenstein from the perspective of the historian, who differentiates in greater detail, from the perspective of the non-fiction author, who makes the moral side of crime tangible.

Wolfgang Benz judged Reitzenstein's research results in the Süddeutsche Zeitung : “ The truth behind the legends that Reitzenstein destroys in his lucid study is even more disturbing than the finding itself. (...) The result of his research is not a pleasant, but very necessary reading . (…) Serious science - as Reitzenstein shows - can open eyes. " Nikoline Hansen added in the Jüdische Rundschau : " Occasionally it is necessary to ask other questions and also to look at known historical narratives from a different perspective. (...) Julien Reitzenstein is thus continuing an uncomfortable tradition that is characterized by thinking against the establishment. " Sven Felix Kellerhoff judged: " The example shows that critical historical studies should also question the statements made by key witnesses who have been reliable for decades. This is not a relativization, but on the contrary serves to work through it. "