The title of this article is ambiguous. Further meanings are listed under Fritz Bauer (disambiguation) .

Fritz Bauer (born July 16, 1903 in Stuttgart ; † July 1, 1968 in Frankfurt am Main ) was a German lawyer . The kidnapping of Adolf Eichmann to Israel, the positive reassessment of the resistance fighters of July 20, 1944 and the Frankfurt Auschwitz Trials are linked to his name and work as Attorney General in Hesse from 1956 to 1968 .

Fritz Bauer was born to liberal Jewish parents, but saw himself as an avowed atheist . After attending the Eberhard-Ludwigs-Gymnasium in Stuttgart, he studied law in Heidelberg , Munich and Tübingen . During his student days he was involved in a liberal Jewish student association, especially in political debates. After completing his doctorate (“The Legal Structure of the Trustees”) as a Dr. jur. with Karl Geiler , Bauer became a judge at the Stuttgart District Court in 1928 and only two years later the youngest district judge in the Weimar Republic .

Political activities and imprisonment during the Nazi era

Bauer was politically active from an early age. He was a co-founder of the Republican Association of Judges in Württemberg. As early as 1920 he joined the SPD and in 1931 took over the chairmanship of the Stuttgart branch of the Reichsbanner Black-Red-Gold . In connection with plans for a general strike directed against the seizure of power by the National Socialists , Bauer was arrested on March 23, 1933, imprisoned for eight months in the Heuberg and Oberer Kuhberg concentration camps, and released again at the end of 1933. The Wuerttemberg Nazi rulers published a "declaration of loyalty" allegedly signed by eight social democrats in several newspapers. One of the listed signatories is "Fritz Hauer". A Social Democrat named Fritz Hauer is unknown, as is an inmate of the Oberer Kuhberg concentration camp by that name. Historical research therefore assumes that the publication of the "Loyalty Confession" is a printing or typesetting error and that the alleged signatory is inmate Fritz Bauer. The practice of  releasing prisoners from the early concentration camps was that SS , SA and other agencies pressed a declaration of loyalty - a lapel - from the prisoners intended for release . In the case of Fritz Bauer and his co-imprisoned comrades, it seems reasonable to assume that they were required to provide a declaration as a prerequisite for their release, the wording of which is of course not known. For propaganda purposes, the National Socialists turned the incident into a "declaration of allegiance by former social democrats" to dishonor their political opponents. He was dismissed from civil service under the Law Restoring the Professional Civil Service .

In 1936 he emigrated to Denmark . After the German occupation, the Danish authorities withdrew his residence permit in April 1940 and interned him in a camp for three months. To protect himself, he formally married the Danish kindergarten teacher Anna Maria geb. Petersen. In October 1943, when the National Socialists began to deport Danish Jews to the Theresienstadt concentration camp , he went into hiding and fled to Sweden with the support of local helpers . There he worked as an archive assistant and founded the magazine Sozialistische Tribüne with Willy Brandt and others .

The Danish Aliens Police suspected Bauer of interacting with male prostitutes , which was the subject of an exhibition by the Fritz Bauer Institute, which was first shown in 2014 at the Jewish Museum in Frankfurt am Main . Since then, Bauer has been categorized as a homosexual , although he has neither committed nor clear evidence for this.

Activity as attorney general in the Federal Republic of Germany 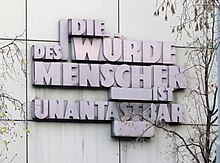 At Bauer's initiative, Article 1, Clause 1 of the Basic Law on the building of the Frankfurt Public Prosecutor's Office

1949 returned Bauer returned to Germany, was Landgerichtsdirektor the Regional Court of Braunschweig and 1950 Attorney General at the Court of Appeal of the city. In 1956, on the initiative of Prime Minister Georg-August Zinn, he was appointed to the office of the Hessian Attorney General based in Frankfurt am Main , which he held until his death in 1968.

One of his first cases as Attorney General in Braunschweig made him known outside of Germany: in 1952 he was the prosecutor in the so-called Remer trial . Bauer coined the sentence: "An unjust state that commits tens of thousands of murders every day entitles everyone to self-defense." As a result of this process, the resistance fighters of July 20, 1944 were rehabilitated and their attempt to kill Hitler legitimized. In his plea , the court agreed with Bauer's view that the Nazi state was “not a constitutional state, but an unjust state ”.

In 1957, Fritz Bauer informed the head of the Israel Mission in Cologne, and with it the Israeli secret service Mossad, about Adolf Eichmann's place of residence in Argentina after he had found out about it from the former concentration camp inmate Lothar Hermann , who lived in Argentina . Bauer mistrusted the German judiciary and police - he feared Eichmann would be warned from there - and turned to Israel directly at an early stage. This communication was the decisive impetus for Eichmann's arrest in 1960. Part of the background to this process is that Bauer's request that the German government endeavor to extradite Eichmann to the Federal Republic of Germany was immediately rejected by the government.

In 1959, Bauer obtained that the Federal Court of Justice transferred the “investigation and decision” in the criminal case against Auschwitz perpetrators to the Frankfurt am Main Regional Court . On Bauer's instructions, the public prosecutor's office there initiated an investigation against former members and leaders of the SS guards at the Auschwitz concentration and extermination camp. The first Auschwitz trial in West Germany, the “criminal case against Mulka u. a. ", was finally opened in December 1963 against 22 defendants before the Frankfurt Regional Court.

Bauer was controversial within the West German post-war justice system because of his involvement, as most of the lawyers at the time had already served the Nazi dictatorship in the past. He himself is said to have once said: "In the judiciary, I live like in exile." The media also quoted him with the sentence: "If I leave my [office] room, I enter hostile countries."

In August 1959 Fritz Bauer received information from Willy Rudolf Foerster about the execution of prisoners on German blockade breakers during the Second World War. These were brought onto German ships in Japan "by force" and "murdered in cold blood without a court judgment" on the way. He also reported to Bauer about “untrue testimony” by former German diplomats in court. The aim of this was to prevent a "serious and thorough investigation" into his own case. Foerster, together with the Jewish Aid Committee in Tokyo, had helped a considerable number of Jews to flee to Japan and employed them in his company. For this he was arrested and tortured in 1943.

In 1960, Bauer gave the lecture on The Roots of Fascist and National Socialist Action to representatives of youth associations . The suggestion made by the Rhineland-Palatinate State Youth Council to make the text Upper Schools and Vocational Schools available as a brochure was rejected by the state's Ministry of Culture . The rejection was justified in 1962 by the young CDU MP Helmut Kohl "nassforsch": The time lag from National Socialism was too short to be able to form a final judgment. The text in which Bauer argued that the Nazi state was not an industrial accident in history did not appear in bookshops until 1965. The investigations started by Bauer against alleged desk perpetrators of " euthanasia " were later discontinued.

Fritz Bauer's work focused on the establishment of a democratic judiciary, the consistent prosecution of National Socialist injustice, and the reform of penal and penal law . The Frankfurt Auschwitz Trials (1963–1981) would probably not have come about without Bauer's persistent commitment. Most of the perpetrators were sentenced to only a few years in prison for complicity in murder, and broad sections of society also opposed the trial. Nevertheless, Bauer's merit is to have initiated the public debate on the Holocaust issue from the mid-1960s through the trials he initiated. Of his writings, the book Das Verbrechen und die Gesellschaft , published in 1957, is considered the main work. In it he doubts the assumption of free will as the basis of the applicable criminal law of criminal law and instead pleads, following the teachings of Franz von Liszt and Gustav Radbruch, for a "criminal law that - with waiver of punishment - only knows measures of social rehabilitation and protection."

Memorial plaque on the last residential building in Frankfurt am Main

Bauer was found dead in the bathtub of his apartment in Frankfurt on July 1, 1968. When the corpse was opened by the Frankfurt forensic doctor Joachim Gerchow , pre-existing heart damage, severe acute bronchitis and the use of sleeping pills were found. There were no indications of third-party debt. Thus suspected Gerchow in its final report and later statements a suicide . However, there are no indications of the behavior of Bauer before his death. At his request, Bauer was cremated, contrary to Jewish tradition. The order from Bauer's deputy to apply for a judicial opening of the corpse was disregarded by the Frankfurt public prosecutor's office responsible for this, for reasons that cannot be identified today, and immediately released the corpse - also for cremation. An administrative section took place because Bauer’s relatives in Scandinavia agreed to what Bauer’s deputy had sought.

Fritz Bauer's urn was buried in the Örgryte gamla kyrkogård cemetery in Gothenburg .

"An injustice state like the Third Reich is not at all highly treasonable."

"I think it is a sad truth that we are very close to our ape state and that civilization is just a very thin blanket that is peeling off very quickly."

- Audio recording by Fritz Bauer in the Fritz Bauer exhibition in Frankfurt . The prosecutor. Nazi crimes in court (2014)

"When I leave my office, I enter enemy territory"

Fritz-Bauer-Platz in Braunschweig with a quote from the Basic Law as a wall decoration on Bauer's initiative.

Fritz Bauer in art and culture

In his Farewell to Yesterday (1966), the film director and writer Alexander Kluge had Bauer make a plea for the humanization of the judiciary. In 2013 he dedicated a book to him: 48 stories for Fritz Bauer . These stories are initially framed by a narrative about Bauer's funeral and finally by a dedication text.