The Stupidedia (from English Stupid and encyclop edia or Wikip edia , nickname Stupi ) was a German-language wiki project that was founded on December 17, 2004 by the Viennese David Boris Sowka, pseudonym David Uebel. A satirical lexicon was created on the platform, which was freely written by private users and parodies Wikipedia . Like many other wikis, Stupidedia uses the MediaWiki software, but there was no collaboration or organizational affiliation with the Wikimedia Foundationwho u. a. which Wikipedia operates. The Stupidedia was financed through advertising . After initial problems with the original U&T license , the GNU FDL was introduced.

Due to the sharp drop in the number of views and users, as well as an overwhelming number of vandalistic contributions, the satire project in 2018 with the best-rated articles should move to a blog format with a new layout in order to win more readers again and increase the quality without anonymous contributions. Due to the low response from the remaining regular users, it was finally decided to stop work on the Stupidedia on January 31, 2018 instead and to archive the previous inventory; Registration and anonymous edits have been disabled, but the pages remain online for reading.

In the stupidedia, terms are primarily presented in a humorous or satirical form.

Example for a quick deletion request ("disaster alarm") at Stupidedia 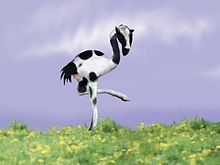 Fictional creature: A "flame cow" drawn for an article on the stupided slide

In March 2005 there were 1,400 articles. By the time Stupidedia stopped working on articles on January 31, 2018, the inventory had grown to around 24,000 articles. All existing articles are categorized. T-Online said in 2011 that the articles were "complete nonsense".

Regardless of the fact that the Stupidedia was a "fun project", clear rules were defined which should draw the authors' attention to the type of desired or undesired content. So are z. B. glorification of violence, pornography, racism etc., grossly insulting articles ("bashing") and those whose meaning is only accessible to a small group of people (" insiders ") were prohibited. The project also made demands on the orthography and style of the contributions. The enforcement of these guiding principles was ensured through control by other users, in particular the dictators (see section User ranks ). Offensive articles have been deleted.

The articles are assigned to three different namespaces, which differ in the content and formal requirements for the articles they contain. In the main namespace, which represented the core of the stupidedia, only articles were allowed that were written in an encyclopedic style; Poems, reports, dramas and other entries that do not deal factually with a topic found their place in a miscellaneous namespace. The third large sub-area of ​​the Stupidedia were the so-called mirror worlds , which were stylistically based on the main room. In them the authors were instructed to avoid internal contradictions. The creation of invented states on an equally invented map of the world resulted in a kind of separate universe .

Articles that deal with unwelcome public figures or celebrities are particularly offensive ; for example, articles about such people are categorized as puke or stupid as shit . In some cases, Stupidedia articles had to be removed due to complaints from the persons concerned. Articles about Bushido , Jan van Helsing , Michel Friedman , Heino , Dolly Buster , Nanu-Nana , the Frisian Radio , the Gray Panthers party , the Gypsy ethnic group and Tine Wittler were blocked.

In numerous articles one or more pictures can be found, which are often provided with satirical comments. In the first few years, these images could be integrated into the articles or taken from any source and then uploaded. In later years all uploaded images in the Stupidedia had to be provided with sources and the associated licenses in order to avoid claims for damages. External integration was no longer permitted and technically no longer possible. The Stupidedia continued to possess its own ALS license ( A utoren l ICENSE for S tupidedia) that could be used by users for their own works, and only their use within the encyclopedia and outside allowed with the permission of the creator.

Similar to Wikipedia , everyone was allowed to participate anonymously in the Stupidedia ; registration was optional. Registered users could, however, protect articles while they were being drafted. In addition, with increasing reputation, they could be promoted to ironically designated user ranks, which allude to terms from party states. At first he could become a hero of work after at least 30 days . This corresponds to the sifter in Wikipedia. After another 30 days he was able to become a functionary . He took on the role of moderator in the stupidedia, so that he could, among other things, remove requests for deletion and end votes. Finally, he could still be appointed dictator , which corresponds to the administrator in Wikipedia and took place after discussion and majority voting by the other dictators. Dictators could protect or delete articles, warn and block users and were the final authority in all decisions.

Edits have been blocked for anonymous users since the end of active operation. No new users could register either. Existing users were able to continue working on the project for a few weeks until this was also deactivated without further notice. In the meantime, it is no longer possible for any user, regardless of their rank, to log in or make changes.

Since mid-2006 there have been the so-called hammer articles, which were proposed by users and were awarded the "hammer" after a successful open vote in which all users can participate. A new award since the beginning of August 2012 was the award of a successful article, which was seen between a non-awarded and a hammer article . The dictators also selected some hammer articles as gold cup articles by means of internal voting . Articles recognized as outstanding by users and listed in the internal Hall of Fame were presented one after the other as Articles of the Week on the main page.

There was also the Stupid Contest. The aim was to write the best article on a given topic by a certain deadline and to assert yourself against the other participants. The jury, consisting of very active users, distributed points in the categories of humor, language and design / layout. This was usually held at around two-monthly intervals and was intended to lead to higher quality contributions to specific focal points.

There was also a Stupid Art Contest , in which self-made pictures and photo montages were evaluated and which tried to capture a broader spectrum of hobby artists in order to improve the problem of the pictures with incomprehensible usage permits through those created especially for the stupidedia and beyond to create a certain distinctiveness on an artistic level.

A smaller competition was the so-called stub of the month , which took place monthly. Revised articles could be submitted there that were either too short before the revision or were included in the list of the quality offensive (QO) due to severe weaknesses in content . The general participation in the competition was usually considerably lower than in the Stupid Contest. The winner of the stub of the month was also chosen by user voting.

Since summer 2012 there has been a mini-contest in addition to the Stupid Contest. As a rule, this received less attention than the Stupid Contest. It was held at irregular intervals, and for each edition of the contest there was a special topic that the participating authors had to follow.

The article duel was a way in which authors could compete against each other for the better article. Two authors each chose an article with which they wanted to compete against each other, and determined the point in time by which both authors had to have finished their work. After the end of the writing time, each user of the Stupidedia could vote which one he found better. The author or the article with the most votes was declared the winner of the duel.

The Stupid Literature Contest was an irregular competition, and the topic was designed so that the authors filled the miscellaneous namespace with their participating articles. The contest entries were evaluated by a jury.

For the first time, the Stupidedia organized the Interwiki Contest from August 2012 to September 2012, where - unlike the Stupid Contest - the competition wikis Kamelopedia and Uncyclopedia were supposed to take part. However, this was canceled again because there was a lack of participants from the other wikis.

The following important information is missing from this article or section:
public perception, there is nothing to do with mirror worlds
Help Wikipedia by researching and pasting it .

The project also attracted attention by parodying certain world events in a large-scale project made up of several articles and the associated context. For example, the Iraq war was portrayed in Spiegelwelten as the “Oceania conflict”.

The Stupidedia helps! Project has existed since 2014, where users could ask all sorts of questions and the “experts” at Stupidedia answered them in a satirical way.