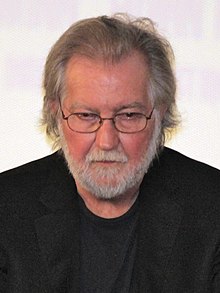 William Tobe Hooper (born January 25, 1943 in Austin , Texas , † August 26, 2017 in Sherman Oaks , California ) was an American film director , producer and screenwriter who worked primarily in the horror film genre . His best-known films are Blood Court in Texas (1974) and Poltergeist (1982).

Hooper studied film and drama at the University of Texas and Dallas . In the early years of his career he made the short films Abyss (1959) and Heisters (1963) as well as documentaries for television, including a film about the band Peter, Paul and Mary . His first feature film Eggshells (1969) about a hippie commune was awarded at the Atlanta Film Festival , but did not find a distributor . Frustrated by the experience, Hooper decided to make a film in a proven genre that would open the doors to professional production in Hollywood for him.

Together with Kim Henkel , his Eggshells co-author, Hooper developed the script for a horror film. In 1973, he and Henkel founded the manufacturing company "Vortex Inc.", and Bill Parsley of Texas Tech University helped set up the starting budget (totaling around 80,000 US dollars ). In October 1974 the finished film started as The Texas Chain Saw Massacre in American cinemas and, thanks to a clever advertising campaign, became a surprise success. Because of the opaque practices of the Bryanston Pictures distributor, producers and profit-sharing cast members and crew members saw only a fraction of the money they were entitled to. The film was sometimes heavily attacked by the critics and is now considered a classic of its genre.

1979 Tobe Hooper had another success with the television - Miniseries burning must Salem by Stephen King 's novel , which was evaluated as a feature film in Europe. In contrast, his films Blutrausch and Das Kabinett des Schreckens were only accepted with restraint or not at all by audiences and critics. In 1982 Steven Spielberg hired Hooper as a director for Poltergeist , his greatest commercial success, but Spielberg gave him little artistic freedom and excluded him from post-production . In 1983 Hooper made a music video for Billy Idol's single Dancing With Myself . Texas Chainsaw Massacre 2 (1986), the sequel to his hit film from 1974, was produced with a budget of just under 5 million US dollars, but disappointed both financially and artistically, like his other two films for the production company Cannon Films , Lifeforce - The Deadly Menace and Invasion of Mars .

Since the late 1980s, Hooper turned again predominantly lower budgeted films and episodes for television series, so in 2002 for Steven Spielberg's miniseries Taken . He was also the producer of Michael Bay's Texas Chainsaw Massacre (2003), the remake of his 1974 film, and the prequel Texas Chainsaw Massacre: The Beginning (2006), which failed critical acclaim but topped the box office proven profitable.

In 2011, Hooper published the horror novel Midnight Movie , making his debut as a novelist. The German translation was published in 2012 under the same title.

On October 25, 2013, Hooper's film Djinn - The Devil's Brood , with which he returned to his usual scary genre, premiered at the Abu Dhabi Film Festival . The film was made exclusively in the United Arab Emirates, which largely contributed to the costs of film production. The film was released on DVD in Germany on July 21, 2015. It was to be his last film.

Tobe Hooper was married and divorced twice with a son named William Tony. Hooper died of natural causes on August 26, 2017, at the age of 74 in Sherman Oaks, California.