Night of death in Stammheim

The night on October 18, 1977, when the imprisoned leaders of the Red Army Fraction (RAF) terrorist organization Andreas Baader , Gudrun Ensslin and Jan-Carl Raspe died by suicide in their prison cells in the Stuttgart prison is known as the night of the death of Stammheim . Irmgard Möller survived seriously injured.

The event marked the end of what is known as the German Autumn , in which the second generation of the RAF attempted to free the imprisoned first-generation terrorists. It was closely related to the Schleyer kidnapping and the hijacking of the "Landshut" plane . In response to the deaths of the prisoners, Hanns Martin Schleyer , kidnapped by the RAF, was murdered on the same day .

On the night of Stammheim's death, there was a multitude of speculations and conspiracy theories that the suicides happened under state supervision or even state-ordered murders.

The members of the first generation of the RAF were arrested in 1972 after a series of attacks that left several people dead. In 1973, the prisoners were amalgamated in the high-security wing of the Stuttgart prison and brought to justice in a newly built courthouse next to the prison. RAF co-founder Ulrike Meinhof died of suicide in her cell in 1976. After Meinhof's death, RAF member Irmgard Möller was also relocated to Stuttgart. In the protracted Stammheim trial , the prisoners Baader, Ensslin and Raspe were sentenced to life imprisonment in April 1977 . The lawyers appealed on appeal , so that the judgments were not yet final. On September 5, 1977, the Schleyer kidnapping occurred, with which the second generation of the RAF tried to press the prisoners free. When the federal government, headed by Chancellor Helmut Schmidt, did not give in, the "Landshut" plane was hijacked on October 13, 1977 and its captain was murdered by a group of terrorists from the Popular Front for the Liberation of Palestine (PFLP), allied with the RAF . In the early morning of October 18, 1977, the aircraft hijacking by GSG 9 was ended, and all 86 remaining hostages were freed unharmed.

Guns in the high security wing 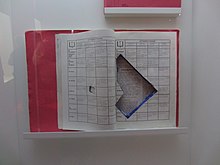 From 1976, lawyer Arndt Müller smuggled three firearms into the high-security wing in Stuttgart. Raspe and Baader killed each other with two of them. The later RAF member Volker Speitel had worked at Müller in 1976 as a "chancellery assistant"; he had bought the pistols in Hungary.

After his arrest, Speitel became a key witness and recorded the following procedure: Speitel made a cavity in the attorney's stapled hand-held files so that a self-loading pistol without a grip could just fit into it. Then he glued the place with bookbinder glue so that the file could be leafed through. The handbook was then handed over to the inmates in the courtroom, who were allowed to take them to their cells. After the trial days, the files were only checked superficially by a judicial officer by leafing through them, as the prisoners were usually supposed to be removed quickly. The smuggling was only known through Speitel.

It was only later that prepared files were found in Arndt Müller's office. In this way, Müller brought a photo camera, several hot plates, a transistor radio, various small electronic parts, three handguns, 650 grams of explosives and detonators into the high-security wing. After the deaths of the prisoners, explosives and fuses were found in several wall hiding places.

Speitel made a confession in which he described the weapons smuggling in detail. Arndt Müller claims not to have known that firearms and explosives were in the hand file. In 1978, however, he was sentenced to four years and eight months 'imprisonment and a further five years' bans for arms smuggling and supporting a terrorist organization .

Jan-Carl Raspe received a Heckler & Koch type HK 4 pistol , which he hid in a wall hiding place behind a baseboard in his cell. Baader received a pistol from the Hungarian manufacturer FÉG , caliber 7.65 mm , which he first hid in a wall hiding place and later in his record player. The third weapon, a 38-caliber Colt Detective Special, was not discovered until a month after the inmates died in cell 723, after the plaster was removed. It was also hidden in a wall. Helmut Pohl was in cell 723 until August 1977 .

With the smuggled electrical parts and the record players allowed for the prisoners, Raspe had also made an intercom system via the cell-to-cell line of the former institution radio, which the prisoners could presumably use to communicate unnoticed. The speculation that the prisoners' conversations could have been tapped was always denied. According to the latest findings, however, it seems to have been proven that cells in the Stuttgart JVA were wiretapped. However, it is unclear whether the authorities were also informed about the weapons in the cells and is denied. It is assumed that the detainees, the official prohibition of contact could handle that after the German Parliament decided in summary proceedings contact ban law was possible.

It is considered certain that Raspe learned about the successful liberation of the kidnapped Landshut's hostages on October 18, 1977 at around 12:40 a.m. from his radio on Deutschlandfunk and passed this on to the other prisoners via the intercom. After that, all four remaining inmates tried to kill themselves. Baader and Raspe shot themselves with pistols, Ensslin hanged himself and Möller tried to kill himself with a knife.

At around 7:40 a.m., Justice Secretary Gerhard Stoll unlocked Raspe's cell. Three other officers were present. Raspe was sitting on his bed with his legs outstretched, his back leaning against the wall. He was bleeding from his mouth, nose and ears and a gunshot wound in his right temple. The gun lay on the mattress. Raspe was still breathing and was taken to a hospital, where he died around 9:40 a.m. At around 7:50 a.m., the officers opened Baader's cell. He was lying dead on his back with a gunshot wound in the neck in a large pool of blood. There was a pistol four inches from him. Gudrun Ensslin was discovered in her cell with a cable hanging from the window cross. Irmgard Möller was found in a pool of blood on her bed. She was curled up on her mattress and passed out. She had four stab wounds in the heart area. After receiving emergency treatment on site, she was taken to the hospital and survived.

According to the former RAF members Susanne Albrecht and Monika Helbing, it was a matter of planned suicides, which should be portrayed as murder for political agitation. Those in the know would have called this venture Suicide Action .

The defense lawyers Otto Schily , Hans-Christian Ströbele and Karl-Heinz Weidenhammer spoke of murder in the 1970s, as did the surviving Irmgard Möller, who also denied that there had been an agreement on collective suicide.

The magazine Stern reported at the beginning of November 1977 that there had been a power outage in large parts of the Stammheim prison on the night of October 18, which meant that unauthorized persons had access to the high-security wing on the seventh floor. Günter Gaus reported in November 1977 that the GDR press was spreading the conspiracy theory that the dead from Stammheim had been murdered.

Baader was found with a bullet in the neck. The gun was four inches from him. The result of an expert from the Federal Criminal Police Office that the traces of powder smoke would indicate that Baader was killed by a shot in the neck that must have been fired “from a distance of between 30 and 40 centimeters”, supported the murder version. Three other experts from the same authority assume that Baader could have set himself the shot.

The conclusions of the German investigative authorities on the death of the prisoners were also adopted in the judgment of the European Commission and the European Court of Human Rights of July 8, 1978 on the complaint by Baader, Ensslin, Raspe about their prison conditions, which was rejected as unfounded.

Both the autopsy commissioned by the investigative authorities by Joachim Rauschke and Hans Joachim Mallach at the Tübingen mountain cemetery and the death masks removed by Gerhard Halbritter, as well as the second examination of the corpses at the instigation of relatives and lawyers, did not reveal any evidence of outside interference.

The GDR Ministry for State Security also checked whether Baader, Ensslin and Raspe could not have been murdered after all, but found no conclusive evidence.

The originally secret parts of the reports at that time were published at the end of the 1990s. Otto Schily later stated that he was "99 percent" convinced that it had been suicides.

Thesis of suicide under state supervision

Another speculation is the thesis of “suicides under state supervision”. This assumes that individual state actors, such as the secret service authorities, have eavesdropped on the prisoners' communications via their secretly self-made intercom. This means that the intentions of the inmates and their weapons stocks would have been known to at least individual officials or even politicians in advance. Some supporters of the theory suggest that the state would have let the prisoners go in order to get rid of them. A documentary by Stefan Aust that was broadcast on the ARD on September 10, 2007, makes assumptions in this direction. Former defense attorney Hans-Christian Ströbele is one of the supporters of the thesis.

In October 2012, Gudrun Ensslin's brother Gottfried and the author Helge Lehmann applied to the public prosecutor in Stuttgart to reopen the investigation of the death because the alleged interrogation protocol of a supervisory officer named Hans Springer, who was on the night of death, had emerged. In it he stated that he had been recalled from his post by an unknown person by telephone between 0:30 a.m. and 3:30 a.m. He was assured, however, that the prisoners would still be guarded. In April 2013, the Stuttgart public prosecutor's office refused to reopen investigations, among other things because there were reasonable doubts about the authenticity of the interrogation protocol. In addition to inaccuracies in terms of content and form, the forensic institute of the LKA Baden-Württemberg found that both the typewriter and font used did not match the 96 protocols from that time used for comparison.

The historian Sabine Bergstermann points to numerous mishaps and contradictions in the investigation of the deaths and draws the conclusion that "the accusation of unilateral and by no means open-ended investigative work cannot be dismissed out of hand". She is personally convinced of the suicide of Baader, Ensslin and Raspes, but it is not likely that the events took place as the investigative commission and the public prosecutor's office portrayed. In many journalistic and scientific publications, speculations about the murder of the inmates are referred to as conspiracy theories .