Following the High School studied Stafford at the Naval Academy in Maryland and acquired in 1952 an engineering degree with honors. He joined the U.S. Air Force and was trained as a pilot at Connally Air Force Base, Texas . After the basic course, which he successfully completed in September 1953, he received an interceptor course and served with a unit in South Dakota .

In December 1955 Stafford was transferred overseas and came to Germany for three years. At the now closed Hahn Air Base in the Rhein-Hunsrück district , he was a pilot and squadron leader of the 496th Fighter Interceptor Squadron.

Back in the USA, Stafford came to California at Edwards Air Force Base (EAFB). From August 1958 he was trained at the Experimental Flight Test Pilot School. He obtained his test pilot license in April of the following year, combined with an award as best in class. He stayed as an instructor at EAFB and was later promoted to head of the performance department.

Stafford had just completed test pilot training when the first U.S. astronauts were selected in April 1959. Becoming an astronaut appealed to him, so he submitted his application as soon as the second group was put together. At the same time, he wanted to advance in the Air Force and get training at Harvard Business School because management personnel was in demand. He also managed to get one of the few USAF places. On his third day at school, he received news from Houston that he was accepted as an astronaut. He decided to give up business studies in favor of a space career. 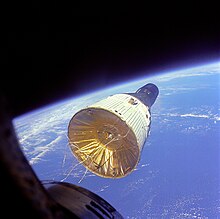 Gemini 7 captured from a distance of approx. 7 m from Gemini 6A

Stafford joined NASA in September 1962 as a member of the second astronaut group. Three years later, in December 1965, he took off into space as a pilot of Gemini 6A together with Walter Schirra . The main task was the first rendezvous of two manned spaceships in earth orbit. The previously launched Gemini 7 spaceship was first successfully approached to within forty meters. During the subsequent joint flight within the next five and a half hours, very precise and impressive maneuvers were achieved, in which the smallest distance between the two spaceships was only about 30 cm.

Six months later, Stafford made his second space flight. He was promoted to the flight crew of Gemini 9 because the originally named astronauts had died in an accident. Together with his pilot Eugene Cernan , he carried out rendezvous maneuvers with a previously launched target satellite in June 1966. The planned coupling did not take place, however, because the payload fairing of the satellite was open but not detached.

LM Snoopy during rendezvous with Apollo 10 in lunar orbit

As part of the Apollo program , Stafford was involved in mission planning. In addition, he trained in replacement crews of several canceled Apollo flights before he was set up as the commander of the replacement crew of Apollo 7 after the Apollo 1 disaster .

Two months before the first manned moon landing, Stafford was in command of Apollo 10 - the dress rehearsal for Apollo 11 . Together with John Young and Eugene Cernan , he first tested the lunar module in the orbit of the earth's satellite in May 1969 . They approached the lunar surface within 14 km. After disconnecting the descent step, the attitude control computer failed. Stafford and Cernan managed the rendezvous with the mother ship by hand control.

Following his third flight, Stafford initially headed the astronaut office, succeeding Alan Shepard , who was preparing for his flight to the moon. After Shepard's return in June 1971, Stafford was deputy of the Flight Crew Operations Directorate, which is responsible, among other things, for the training of space travelers. He gave up this position when he was again assigned to a space flight.

Stafford made his fourth and final space flight in July 1975 with the Apollo Soyuz Test Project . Under his command, Apollo ASTP docked with the Soviet Soyuz 19 and remained connected to it for almost two days. The company developed a close friendship with his Soviet colleague Alexei Leonow .

After this nine-day space flight, Stafford ended his astronaut career. He returned to EAFB, his last place of work before joining NASA. He headed the flight test center for three years. He then moved to Washington, DC, and became USAF Assistant Chief of Staff for Research and Development.

In November 1979, Stafford left the US Air Force and became a manager in the private sector. For example, he was on the board of the watch manufacturer Omega and the Bendix Corporation. He continued to advise the USAF and NASA, as well as Ronald Reagan during his presidential campaign on national defense issues. In June 1990 he was appointed chairman of a committee that had to investigate the future possibilities of manned space travel.

Tom Stafford was awarded the Congressional Space Medal of Honor in 1993. In 1997 he was inducted into the National Aviation Hall of Fame .