Anthony Grove Hillerman (born May 27, 1925 on a farm near Sacred Heart , Oklahoma , † October 26, 2008 in Albuquerque , New Mexico ) was an American writer of crime novels. Hillerman was seen as authority for the culture of the Diné - and Hopi - Indians .

Hillerman received his first education as a day pupil in a boarding school for Indians. In 1945 he returned from the Second World War wounded and highly decorated . In 1946 he successfully completed his journalism degree at the University of Oklahoma . Until 1965 he worked as a journalist, then until 1987 as a lecturer in journalism at the University of New Mexico .

In 1970 Hillerman published his first detective novel, The Blessing Way ( Wolf Without a Track , 1972). His novels are set in the northeast of the US state of Arizona in the sparsely populated Navajo Nation Reservation . His detectives are the Diné police officers Joe Leaphorn (who later retired and worked as a private investigator) and Jim Chee (first published in 1980 in the novel People of Darkness ).

In his novels he showed the conflict between modern industrial and consumer society and the traditional values ​​and customs of the American Indians. His detailed and intense portrayal of the seasons, the weather and the landscapes of the reservation are not just an exotic backdrop against which the plot unfolds, they are themselves part of the story. The criminal cases can only be deciphered with reference to the traditions of the Diné. This opens up a fascinating glimpse into an alien culture threatened by modern civilization for the reader.

Although his health deteriorated in the last few years of his life, he tried to keep writing. He died on October 26, 2008 in a hospital in Albuquerque.

Hillerman was awarded for his novels, numerous awards that the quality of the detective stories as recognized his portrayal of Indian culture: Sun got Hillerman example, in 1974 the Edgar Award and in 1987 the Grand prix de littérature policière for Dance Hall of the Dead (Shots from the stone age) , 1988 became his A Thief of time (who steals the past) with the Golden Spur of the Western Writers of America awarded, for the same novel he received the 1989 Macavity Award . Skinwalker's Night won the 1988 Anthony Award . In 2002 Seldom Disappointed received the Anthony Award for Best Nonfiction Book. In 1990 he was honored by the American Anthropological Association . In 1991 he received the Nero Wolfe Award for Coyote Waits (German: The Coyote Waits ). In 2002 he received the Agatha Award for his non-fiction book Seldom Disappointed: A Memoir , a year later he also received the Agatha Award for his life's work.

The Special Friend of the Dineh award , which he received from the Navajo Tribal Council in 1987, meant a lot to him . 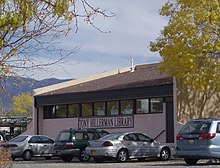 In 2009 she published the illustrated book Tony Hillerman's Landscape: On the Road with Chee and Leaphorn , with impressions of the landscape of the quadrangle of the states of New Mexico, Arizona, Utah and Colorado, which are essential for the plot and atmosphere of Hillerman's books

For the US broadcaster PBS :