Affected area in the event of a "small" storm surge of only 4.5 m when a dike breached on the Glameyer-Stack, Otterndorf

The municipality in the Land of Hadeln is located approx. 20 kilometers southeast of the district town of Cuxhaven . Wanna is in the Niederelbe area .

The proximity to the Elbe estuary and the North Sea entail the risk that in the event of a dike breach during a storm surge, the maximum 5  m above sea level. NHN , but often significantly lower lying municipal area will be flooded to a large extent. One possible scenario is described in the article Glameyer Stack .

The Emmelke flows through the village .

The municipality of Wanna consists of the following districts:

The megalithic systems at Westerwanna are located west of Westerwanna in the moor and in the Süderheide. The place was first mentioned in 1139 as "Wanen". The St. Paul Monastery , at the gates of Bremen, owned 1½ yards in Wanna at that time. There is evidence of a chapel in Süderleda in the 13th century (around 1230). The right to propose the pastor later lay with the Neuenwalde monastery . In 1239, Duke Albert I of the still undivided Duchy of Saxony sold the parish people of Süderleda a path to Osterwanna (today: the "Neue Trift") and a drainage canal to the Emmelke . Since the 14th century there was also a church in Westerwanna, which was consecrated to St. George . Around 1369 a new church was built in Westerwanna, probably using material from the broken Süderleda chapel.

In 1590 the meadow and moorland ( common land ) in the east of the municipality was divided between the already existing farms. The moor weather system is likely to fall during this time as an extension of the southern weather of the Holländerhufen in Ihlienworth-Westerende, to the west, towards the Süderledaer Hof. After about 1650, in addition to agriculture, the economic importance of peat cutting on the northern edge of the Ahlenmoors increased. The dried peat was mostly shipped via the Emmelke and Medem to Otterndorf .

Since 1915 the cultivation of the heather and moorland south of Wanna has been intensified. This is where the Ahlen-Falkenberg settlement came into being, which has had its own chapel since 1951 .

In 1970 Wanna became a member of the Hadeln Samtgemeinde , in 1972 the Wanna municipality joined the Sietland Samtgemeinde formed two years earlier .

The Wannaer Geest is rich in prehistoric and early historical sites. In addition to the large stone graves of the funnel beaker culture , the old Saxon urn grave field on the Gravenberg (20 m above sea level) has achieved national fame. 53.746422222222 8.7727472222222

The Kronskark , also called Wanna 10 , is a megalithic complex in the Ahlen forest.

The council of the Wanna parish consists of 12 councilors. This is the specified number for the member municipality of an integrated municipality with a population between 2001 and 3000 inhabitants. The council members are elected for a five-year term by local elections. The current term of office began on November 1, 2016 and ends on October 31, 2021.

The honorary mayor is also entitled to vote and sit on the council of the municipality.

The design of the municipal coat of arms of Wanna comes from the heraldist and coat of arms painter Albert de Badrihaye , who designed around 80 coats of arms in the district of Cuxhaven. After 1945, because of denazification , a rune was removed from the silver urn image from the original coat of arms. 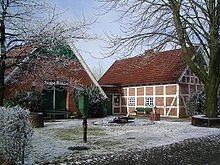 The Heimat Museum in Wanna

The local history museum shows finds from prehistory and early history in an old farmhouse . It houses the village blacksmith, the wooden shoe workshop and the shoemaker's shop.

The music culture in Wanna is shaped by the church and its musically shaped church services. In 2010 the Wanna elementary school was renamed the Prof. Hermann Rauhe School ( Hermann Rauhe was director of the Hamburg University of Music), with a focus on the musical and cultural area. A hard rock band formed in 2011.

High German and North Low Saxon are spoken in Wanna .