Hechthausen ( Heckthusen in Low German ), also called "the gateway to Cuxland", is a municipality in the east of the Lower Saxony district of Cuxhaven . It belongs to the joint municipality of Hemmoor .

Hechthausen is bounded in the north, east and south by the river Oste , which is crossed here by the Niederelbe railway Cuxhaven - Stade - Hamburg and the federal highway 73 , which runs almost parallel to it.

Hechthausen, or rather the noble family de Hekethusen who were wealthy here at the time , was first mentioned in a document in 1233 as "Hekethusen". The place is undoubtedly much older, although there are no records of it.

Today's community not only includes the town of the same name, but also the formerly independent villages Bornberg (first mentioned around 1680), Klint (1342), Kleinwörden (1346), Laumühlen (around 1560), Wisch (1420). A village name is missing in this list, which unfortunately has completely disappeared, although it can be found in many medieval documents: "Borchholte". This village may have included today's districts of Klint and Laumühlen. This place in the parish of Hechthausen, after which the aristocratic family de Borchholte called themselves, is mentioned as "Burcholt" in a document from Archbishop Adalbert of Bremen in 1059 .

In the High Middle Ages the de Hekethusen moved near the city of Belgard . There they founded the Vorwerk "Hechthausen" ( Polish Ocwieka ), which is still part of the village of Zarnefanz , a village in the powiat Białogardzki of the West Pomeranian Voivodeship in Poland .

In the local Hechthausen, the von Brobergen family initially succeeded the de Hekethusen, but later (around 1400) the Marschalck von Bachtenbrock family from Horneburg . This family, who is still living here today, quickly managed to set up a small, closed domain, the Hechthausen Patrimonial Court. This also included the village of Kranenburg on the other side of the Oste (largest tributary of the Elbe) . As patrons of the Marien Church in Hechthausen, they also supervised the local clergy. You were also instrumental in the appointment of the first Lutheran clergyman, Andreas Gusters (around 1550). Although the powers of the Marschalck von Bachtenbrock family were increasingly restricted by the sovereigns, the sovereignty of the Hechthausen court remained nominally in effect until it was repealed in 1850. The localities of the court were then first assigned to the Himmelpforten Office , then in 1859 - with the exception of Kranenburg - to the East Office .

After losing the war on the side of Austria-Hungary, the Kingdom of Hanover was annexed by Prussia in 1866 and thus became a Prussian province . In the course of the Prussian district reform on January 1, 1885, the Amt Osten - u. a. with the towns of Bornberg , Hechthausen, Kleinwörden, Klint , Laumühlen and Wisch - and the Neuhaus district of Neuhaus (Oste). 1932 this group was with the then county Hadeln to county land Hadeln with county seat in Otterndorf combined.

After the collapse of the German Reich , the remnants of the German Wehrmacht (Corps Ems) handed Hechthausen over to the troops of the British Guard Panzer Division on May 5, 1945 (see memorial stone at the entrance to the town).

On July 1, 1972, the communities Bornberg, Kleinwörden, Klint, Laumühlen and Wisch were incorporated. These communities belonged together with Hechthausen since 1962 to the integrated community on the Oste . The new municipality of Hechthausen has been part of the Hemmoor municipality since 1972.

The council of the municipality of Hechthausen consists of 14 council women and councilors. This is the specified number for the member municipality of an integrated municipality with a population between 3001 and 5000 inhabitants. The council members are elected for a five-year term by local elections. The current term of office began on November 1, 2016 and ends on October 31, 2021.

The mayor is also entitled to vote in the council.

Allocation of seats in the municipal council by September 30, 2018
A total of 15 seats

Current distribution of seats by resigning from the party

On October 1, 2018, the municipal councilor Thorsten Grützmacher resigned from the SPD and joined Die PARTTEI , but he is considered non-attached in the council.

Allocation of seats in the municipal council from October 1, 2018
A total of 15 seats

This communal partnership was a longstanding partnership of the ev.-luth. Parish Hechthausen preceded with the local parish. After reunification, the political communities found each other on this basis. Regular meetings at the municipal level as well as between the volunteer fire brigades and the citizens of both communities have strengthened the connections between Hechthausen and Hilbersdorf, so that in October 2006 the 15th anniversary of the partnership was celebrated with a festive event in Hilbersdorf. 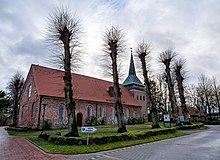 In terms of regional spatial planning, Hechthausen will function as a basic center in the future .

Hechthausen has a train station on the Niederelbebahn Hamburg – Cuxhaven (opened on November 11, 1881). After the passenger traffic was in the meantime (December 2007 to December 2018) operated by the metronom railway company with new rolling stock, since then Deutsche Bahn and its subsidiary, the transport company Start Unterelbe , have been using the same, revised rolling stock on this route.

The railway line crosses two other traffic routes southeast of Hechthausen. These are the parallel federal highway 73 and the navigable Oste . The otherwise double-track line has only been extended to a single track in this area since the end of the Second World War after the Ostebrücke was blown up. The current railway bridge was built by English pioneers. This makes it one of the last temporary bridges of Deutsche Bahn still in operation .

“The story that I want to try to reproduce here according to oral tradition cannot claim to be absolutely correct, especially with regard to the time when it took place. I couldn't determine the year, but it can only be either the late thirties or the early forties of the 19th century. At that time, large sums of gold came from England to Hanover, where the authority was located which paid out the pensions ( half-pay ) of the officers serving in the King's German Legion . These gold shipments came by ship up the Elbe to Hamburg; only in winter when there was ice they got no further than Cuxhaven and had to be transported from there by freight wagons. Old people have told me that sometimes a number of these covered wagons pulled along the Sietwende, which leads from Hechthausen to the ferry. Let us assume that the incident took place in the winter of 1840. A transport of English gold from Cuxhaven was advised on the Oste ferry. The wagons could arrive at any moment and the miller and innkeeper, whose financial circumstances were by no means brilliant, was anxious to find a reason to hold up the transport so that the people and teams had to lodge with him. This time he thought of picking a special chicken. The freight cars arrived and wanted to continue on their way. They were told, however, that this was not feasible, since with the strong drift ice you can only take the wagon ferry over between the tides. There was no other advice, it had to go under the roof, the horses unleashed and lodging. The bins with the precious contents were duly counted, the horses poured the fodder, and then one went into the house to eat and drink. The drink will not have been harmless, but perhaps of the kind that is still referred to here on the Waterkant as 'north'. It can be concluded from this that all companions on the transport soon fell into a sound sleep. Now the miller's hour had come. With two servants who had been privy to his plans, he quietly rolled down one of the gold barrels, put chains on it and sank it - after some in a deep ditch - after others in a sluice on the Oste. At the first break of dawn - it was still pitch black - he woke his guests and signaled that if they did not want to be prepared to stay there for several days, they should now prepare to leave. They harnessed their harnesses head over heels and hurried to leave. A repeated counting of the tons was omitted, the heavy heads may have caused it. The ferryman brought them all over, and the miller laughed up his sleeve. In addition to a reward, the two accomplices involved in the theft were given the right to demand a large schnapps, so-called sergeants, free of charge as often as they came. The gold transport moved on to Harburg, where overnight camp again had to be moved. What a horror the responsible men may have got into the limbs when it turned out that a barrel was missing! The matter was reported to the authorities and a detailed investigation was carried out, but in Hechthausen people were innocent and unsuspecting and nothing came to light. Over time the matter became known. The miller, who had come to Hechthausen as a very penniless man, had borrowed 50 louis dor from Privy Councilor Marschalck when he leased the mill - in order to be able to buy inventory - now he was visibly wealthier; he rebuilt his house and barn, paid his debts, and when he died left his children a beautiful inheritance. When there was talk of this flourishing in Hechthausen and the surrounding area, it was said: 'This is what makes English gold'. It is also noteworthy that an old captain said that in the 1940s, a notice on the London Stock Exchange warned about the ferry to Hechthausen. "

Districts in the municipality of Hechthausen