The church in Belum

The community of Belum ( Belen in Low German ) is a member of the community association Samtgemeinde Land Hadeln in the Lower Saxony district of Cuxhaven .

Today's Oste flows into a canal a little further east into the Elbe, since an eastern barrier was built in 1964 and the oxbow lake was closed by two broad dams, so the Ostesee was created at the eastern barrier.

Since Belum is located in the north at the old estuary on the Elbe, the name can be traced back to the geographical location. The "column in the country" - the tributary to the Elbe was called Beilheim and Belem and over the centuries it became today's Belum.

Belum was first mentioned on March 23, 1377 in a contract between the parish of Belum and the council of the Hanseatic City of Hamburg. This contract was about the intention not to rob each other anymore. (Other sources speak of 1150.)

The St. Vitus Church was built around the year 1230; it was renovated at the turn of the century in 2000 at great financial expense.

Belum became known in the Middle Ages for its small port, located on the Belumer Wettern. As the main hub for wood in the region, the place came to some prosperity. Two markets a year have survived, the one-week St. Vitus market and the much longer wood market.

Among the main defenses of the Thirty Years' War which belonged Belumer ski jump at the mouth of the Oste . During the Second World War there was an air defense position of the 8.8 cm flak, which fought the Allied bomber formations in the direction of Hamburg with three kills. After the war was between Belum and Kehdingbruch HAWK missiles position of NATO established. In the course of the location of air defense in the Bundeswehr, it was dismantled in the 1990s. Today only a street name and a bus stop remind of the "Schanze". 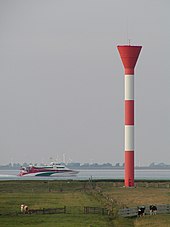 The beacon in Belum

The lighthouses in Belum are also part of the lighting of the Elbe and the North Sea. Across from the Ostebank, a sandbank in the Elbe near the mouth of the East, a lighthouse similar to the Balje lighthouse was built in 1904 . This white tower, based on a round brown brick base, with a railing platform and a conical brown roof, was the first to be operated with petroleum light. Converted to liquid gas in 1927, they had installed a 250 mm belt light as optics. In contrast to the lighthouse in Balje, the tower in Belum was switched off in 1982 and demolished a year later. Today's so-called "leading light line" consists of the Belum upper fire, a thin, red and white striped 44 meter high tower with an inverted conical roof, as well as the Belum lower fire, 1,340 meters away, at the same time the Otterndorf lower fire, which is built the same but only 25 meters high is. The lighthouses can be seen 18 nautical miles.

As part of the regional reform in Lower Saxony , which took place on July 1, 1972, the previously independent municipality of Kehdingbruch was incorporated into the municipality of Belum.

The Belum parish council consists of eight councilors and councilors. This is the specified number for the member municipality of an integrated municipality with a population between 501 and 1000 inhabitants. The council members are elected for a five-year term by local elections. The current term of office began on November 1, 2016 and ends on October 31, 2021.

The mayor is also entitled to vote and sit on the council.

Districts in the municipality of Belum