Beverstedt ( Lower German Beverst ) is a unified municipality in the Lower Saxony district of Cuxhaven .

The northern and eastern part of the municipality is located in the Wesermünder Geest , which is just over 30  m above sea level in the eastern part of the Kirchwistedt district . Reached NHN . The parts of the municipality to the south and west are in the transition area of ​​the Geest, which are only up to 10  m above sea level here. NHN reached, to march. The Beverstedter Moorgeest is crossed by numerous smaller moors . The Lune flows through the community in an east-west direction. With its left tributaries Wellener Bach , Billerbeck , Wandsbeck and Altwistedter Lune and its right tributaries Beverstedter Bach and Dohrener Bach, it divides the Geest into separate "Geest peninsulas".

The localities in the unified municipality Beverstedt

For stains Beverstedt in the previous joint community included the districts Beverstedtermühlen, Deelbrügge, Heyer courts, Kramelheide, Easter village , Spintenkamp, tabs, of waking wood, Wehldorf , waves and Wollingst. The municipal council decided to appoint local administrators in the formerly independent municipalities and also in the districts of Wellen and Wollingst that were incorporated into the Beverstedt districts a few years ago. 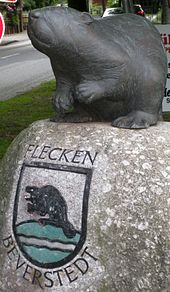 In the early mentions of Westerbeverstedt , the village was "Westrian bever igi seti" (on the western beaver island). The eponymous beaver therefore appears in Beverstedt's coat of arms and small beaver figures stand on the access roads to the village.

The place was mentioned in 1228 as Beversate , since 1666 at the latest it has been called Flecken as a market place. Beverstedt once administered the Beverstedt office with over 40 communities belonging to it.

From the 11th century onwards, the archbishops of Bremen managed to create a territory (ore monastery) to which Beverstedt also belonged.

After the Thirty Years' War the place belonged to the Swedish Duchy of Bremen , then from 1712 to 1715 to Denmark and from 1715 to the Electorate of Braunschweig-Lüneburg .

After the Allies' victory over Napoleon I in 1814, the department became part of the Kingdom of Hanover . The district court of Beverstedt existed from 1852 to 1859 . In 1866 the kingdom came to Prussia as the Province of Hanover . Since 1946, the state of Lower Saxony was created from this .

During the time of National Socialism , Jews in Beverstedt were more and more excluded from social life. Finally, members of the Brumsack and Goldberger families were killed in concentration camps, and their names are recorded on a stele in the Jewish cemetery . Only Julius Brumsack was able to survive the Nazi era and reopen a shop in Beverstedt after the war.

Martin Bensen, the former mayor of the town, has researched the history of the Jews. He also followed up an example of euthanasia killings and had a memorial site created at the entrance to the Beverstedt cemetery.

In the course of the regional reform in Lower Saxony , which took place on March 1, 1974, the previously independent communities of Wellen and Wollingst were added to the community of Beverstedt.

The council of the municipality Beverstedt consists of 29 council members. The standard number for a parish with a population between 12,001 and 15,000 is typically 30 councilors. In the current term of office, the AfD won two seats, but could only occupy one seat. The council members are elected for a five-year term by local elections. The current term of office began on November 1, 2016 and ends on October 31, 2021.

The full-time mayor is also entitled to vote and sit on the council of the municipality .

The full-time mayor of the unified municipality Beverstedt is Guido Dieckmann ( independent ). His deputy is the first councilor Claudia Lühmann.

Chronicle of the mayors

On November 1, 2011, the lower old coat of arms was redesigned. The wavy stripe turned blue, the shield red, the beaver looks friendlier and was encircled by eleven oak leaves. Because the lune indicated by the blue wavy stripes runs through the green shield base and the red shield head borders it, the current coat of arms is not heraldically correct (see: Tinging - heraldic color rules ) . Thus, no color may be used on one color or silver / gold on silver / gold.

Coat of arms of the village of Beverstedt

The coat of arms of the core town of Beverstedt comes from the heraldist and coat of arms painter Gustav Völker , who designed around 25 coats of arms in the district of Cuxhaven.

The new stage in Beverstedt has existed since 1990 and brings a play to the stage about every year. Its director, Lutz Hoeppner, attaches great importance to "textually ambitious and modern pieces". The New Stage Beverstedt has also performed several times outside of Beverstedt.

The trading company Aldi -Nord is based in the district of Heyerhöfen with one of its regional branches and a large central warehouse. There are several supermarkets, several gas stations, car workshops, pharmacies, restaurants, three galleries, several doctors and a specialist center. Shops in many fields are located in the center of the village. In addition to an existing weekly market, a RegioMarkt has been created in which organic farmers, gardeners, beekeepers and fish farmers offer their products under one roof (market hall concept). In place of a department store, a combi supermarket has been created.

The community is located on the federal highway 71 between Bremerhaven and Bremervörde , the road continues in the direction of Hamburg , Stade and Buxtehude . A bypass road - past Beverstedt north - has been relieving traffic in the town center since 2005.

There is a bus line from Beverstedt to Bremerhaven. A comprehensive call collective taxi system has been set up within the municipality of Beverstedt .

The Flixbus connects Beverstedt with the major cities in the north on the line between Cuxhaven and Berlin (via Stade and Hamburg).

Canoe trips on the Lune

Until the beginning of the 17th century, the Lune was navigable by ships from the mouth up to Beverstedt-Deelbrügge. Today it is no longer a main artery, but the river can now be navigated by canoe again.

See also: Canoeing on the Lune

Localities and districts of the municipality of Beverstedt