Location of the joint municipality in the district of Cuxhaven 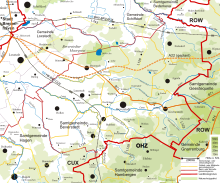 Topography and structure of the municipality Beverstedt

The northern and eastern part of the combined municipality is located with the municipalities Beverstedt, Frelsdorf, Appeln, Kirchwistedt and Stubben in the Wesermünder Geest , which in the eastern part of the municipality Kirchwistedt heights just over 30  m above sea level. Reached NHN . The communities of Bokel, Hollen, Lunestedt and Heerstedt to the south and west are located in the transition area of ​​the Geest, which here only reach heights of up to 10  m above sea level. NHN reached, in the lowland region of the Weser and its tributary Lune . The Geest is crossed by numerous smaller moors (Beverstedter Moorgeest). The small meadow river Lune flows through the central community in an east-west direction and with its tributaries Wellener Bach , Billerbeck , Wandsbeck and Altwistedter Lune (left) as well as Beverstedter Bach and Dohrener Bach (right) divides the Geest through valleys into separate "Geest peninsulas".

The former joint municipality was structured as follows (as of December 31, 2010):

Conversion to a unified church

The council of the integrated municipality Beverstedt consisted of 30 council members. This is the specified number for a joint municipality with a population of between 12,001 and 15,000. The council members were elected by local elections for five years each. The current term of office began on November 1, 2006 and ended with the dissolution of the joint congregation on October 31, 2011.

The full-time joint mayor was also entitled to vote and to sit in the joint municipal council.

After the local elections on September 10, 2006, the Samtgemeinderat was composed as follows:

For joint community foundation in 1971 was municipal coat of arms of the patch Beverstedt redesigned. The golden shield turned red, the silver wavy stripe was set a little higher on a green shield base, the black beaver turned silver and encircled by nine silver oak leaves.

See also : Beverstedt - coat of arms of the village of Beverstedt