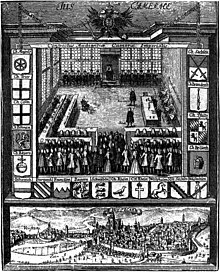 Audience at the Imperial Court of Justice, copperplate engraving, 1750

As subjects of processes called legal historian those court proceedings in the Holy Roman Empire of the German nation , the subjects of individual states- since the beginning of modern times early against their rich direct territorial rule could make an effort.

In the course of the imperial reform under Maximilian I , the Diet of Worms abolished medieval feudal rights in 1495 , proclaimed the Eternal Peace of the Land and created the Imperial Court of Justice as a means of peaceful conflict resolution . In 1498 , King Maximilian put the Reichshofrat as a further final instance under his sole control to the side of this supreme body of jurisdiction in the empire . The order of the Reich Chamber of Justice of 1555 also created the material prerequisites for subjects to be able to take legal action against their sovereignty.

They now had the opportunity to appeal individually or collectively to one of the two highest courts if they had exhausted their legal recourse before the territorial courts or if they refused to accept their claim. Collective actions mostly concerned legal disputes between village or town communities and their respective sovereign rulers, such as forest and pasture , fattening , hunting and fishing rights or the legality of compulsory labor , taxes and duties . Lawsuits by individuals are mostly directed against interference by the authorities in actual or supposedly acquired rights and privileges or against convictions by the territorial courts.

According to Title XLI of the Reichskammergerichtordnung of 1555, the appeal of the appellation was expressly opened to “ poor parties ” who could not afford the usual process fees. They should be assigned “ advocates and procurators and served in vain ”, that is, a lawyer and examining judge should be made available free of charge. A poor person should only pay the court costs when he “ keme to be better able ”. Lively use was made of the possibility of legal action. The wave of lawsuits at the Reich Chamber of Commerce reached a climax in the 1590s, when around 700 complaints were filed annually. Around 1600 the subject trial was considered the everyday form of peasant resistance to official measures. By the end of the 16th century, however, allegations of abuse were voiced by the landlords and lords . In 1586, individual estates of the Lower Rhine-Westphalian Empire complained that

“ Many wanton subjects rebel against ires ordained authority against ires and if they are tightened by the same authority ires disobedience and iniquity, they then blast arduous trials at the chamber of justice and the majority of et falsis narratis [ie: make an effort with false information ] , characterized dan ir mutwill stiffened and gutte police not fully andobtaining ".

The imperial princes had to understand the fact that there was an appellate authority beyond their jurisdiction as a restriction of their sovereignty. They therefore tried many times to obtain a Privilegium de non appellando from the emperor . As a privilegium limitatum , this restricted the subjects' right of appeal either to certain legal cases or to those above a certain amount in dispute. As a privilegium illimitatum, it completely blocked their way to one of the imperial courts, unless the territorial courts had previously refused to accept their case. The emperor had already granted the elector this privilege in the Golden Bull ; almost all of the larger imperial estates received it until the middle of the 17th century. But they, too, now created the highest courts of appeal as the final instance. The way to the imperial courts was still open to the inhabitants of the small and medium-sized territories.

Despite the exceptions through the Privilegium de non appellando , the possibility of subject trial in the Roman-German Empire created a relatively modern guarantee of legal recourse at an early stage. In addition, the ruling practice of the Reich Chamber of Commerce was presented, summarized, commented on and disseminated in extensive peasant law literature . According to today's experts, both of these contributed to the fact that after the Peasants' War in Germany - unlike in France or England  , for example - there were hardly any major uprising movements among the rural population. A legal awareness developed that saw the last resort in domestic conflict resolution and peacekeeping not in the feud, but in a legal dispute carried out according to fixed regulations. That this was the case is shown by the frequency with which the imperial courts were used.

The Reich Chamber of Commerce alone has received around 80,000 calls in the 300 years of its existence. In addition, there were the proceedings before the Reichshofrat in Vienna, the majority of which were subject processes. The imperial court in Vienna has been preferred by the southern German, Catholic subjects and estates since the second half of the 16th century, because on the one hand its judicial posts were purely Catholic and on the other hand it had the reputation of being faster, more efficient and above all more frequent to decide to the detriment of the sovereigns as the Reich Chamber Court, which is controlled by the estates. This was already criticized by contemporaries because of its clumsiness, especially since the representatives of the estates often blocked each other. Individual procedures took decades or even a century. However, recent research has shown that both imperial courts ruled relatively quickly in most cases.

Since the Reich Chamber Court was occupied equally by Catholics and Protestants, it was used more often than the Reichshofrat by Protestants from the north and east of the empire. According to current research, it thus contributed to the integration of the regions of Lower Germany, which had been remote from the empire since the High Middle Ages, into the empire. The historian Gerhard Oestreich saw the creation of a legal guarantee through the subject trial as a factor that promoted the emergence of a German national consciousness:

“ Imperial patriotism and imperial admiration meet in the awareness of legal protection against arbitrariness and despotism by the imperial courts, imperial chamber court and imperial court council, which guarded religious freedom, right to emigrate, protection of property, personal freedom, insofar as it existed then legally, confidentiality of letters and orderly court proceedings. "

Instances such as the imperial courts made it clear to the subjects that they belonged to a state, legal and cultural unit that vaulted the territory of their respective sovereign.