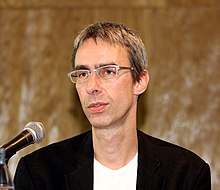 Volker Grassmuck (* 1961 in Hanover ) is a German publicist and media sociologist .

Volker Grassmuck attended the Herschel School in Hanover, where he graduated from high school in 1980 . In the meantime he attended Ridgewood High School in Ridgewood , New Jersey .

In 1981 he began studying sociology at the University of Groningen , and in 1982 he moved to the Free University of Berlin . There he studied sociology , journalism , information science and psychology .

In the 1980s, Grassmuck worked alongside his studies as a journalist: from 1978 to 1979 in the Hanover local editorial team of the taz , in 1982 and 1984 as a member of the editorial team of the autonomous magazine radikal . In 1984 he and others founded the magazine V max - magazine on the fast lane as well as the JetSet Verlags GmbH and in the same year started working for Radio 100 . In 1985 he was the editor of Nachtflug .

Grassmuck's academic career began in 1987 with participation in the research project Metadisciplinary Literature Analysis - Securing evidence of the interrelationship between literary and technical media in Kassel ; In the same year he completed his studies with a diploma thesis on From Animism to Animation - Inclusions and omissions on artificial intelligence from Dietmar Kamper . He then began a second degree in Japanese at the OAS of the Free University of Berlin.

From 1989 he was a visiting researcher at the Socio-Technological Research Department of the RCAST at the University of Tokyo . Here, too, he was active as a journalist, as a columnist for Konpyūta Kagaku (computer science) in Shujunsha in 1991 and as a video editor for ABC News . In 1992 he worked as a news anchor for Radio Japan , NHK and as a freelancer for InterCommunication Magazine , NTT Shuppansha. In addition, he conducted "network research" at the RACE of the University of Tokyo with Kubota Akihiro.

In 1995 Grassmuck returned to Berlin, founded mikro eV in 1998 with others , a project to network Berlin media cultures, and worked on the DFG research project From the order of knowledge to the order of knowledge of digital media with Wolfgang Coy at the institute's chair for computer science in education and society for computer science at the Humboldt University in Berlin .

In 1999 he did his doctorate with Dietmar Kamper at the Free University of Berlin on the media history of Japan with the topic of closed society. Medial and discursive aspects of the 'three openings' of Japan ; In 2000/2001 he took on a substitute professorship for media art at the University of Graphic and Book Art in Leipzig .

From May 2012 to August 2015 he headed the project Basic Supply 2.0 - Internet TV for the new media generation with the research focus on the public, peer structures and knowledge technologies in the Center for Digital Cultures of the Leuphana University Lüneburg .

Play media file
Lecture by Volker Grassmuck at the re: publica 2013: "From Television to WikiVision: Basic Media Services from Everyone for Everyone"

Grassmuck organized the conference series The Wizards of OS. Operating systems of the system society and regularly gives lectures at the congresses of the CCC ; He is critically observing the trend towards the privatization of public education and research institutions and thus closings in the exchange of scientific information and is committed to new forms of copyright such as the knowledge commons and the GNU project .

Grassmuck is one of the first signatories of the Petition Pro Netzneutralität, the aim of which is to prevent the repeal of the rule of net neutrality that has prevailed on the Internet to date . Accordingly, net neutrality is elementary for democracy, as it guarantees a free exchange of opinions free of governmental or economic restrictions.