The Walther-Schreiber-Platz is an inner-city Berlin transport hub and forms the southern end of the district Friedenau to Steglitz . The border between the two districts is an extension of Bornstrasse. 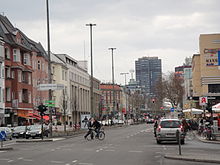 The Schloßstraße beginning at Walther-Schreiber-Platz , 2010

The square is named after the Berlin CDU politician Walther Schreiber . Mayor of Berlin since 1951, he was the successor to Ernst Reuter from October 22, 1953 to January 11, 1955 as governing mayor . After Schreiber's death on June 30, 1958, less than a week later, on July 5, 1958, at the request of the Schöneberg District Office on July 3, 1958, the Senate Department for Construction ordered the name to be Walther-Schreiber-Platz . The Schöneberg district council approved this on August 20, 1958. The place is still called Rheineck today - as it was before it was officially named . The Rheineck pharmacy located here also reminds of this name.

The square originally consisted of an elongated central island on which several tram stops were located until tram traffic was stopped in 1963.

In 1971 the Walther-Schreiber-Platz underground station was opened, which at the time initially served as the terminus. He is completely in the Bundesallee . The underground line under the square, which continued to the south , was built from 1971 and opened in 1974. The square was torn open and then redesigned. It now housed a taxi stop on the eastern side and a bus terminus on the western side.

In 2006 the square was completely redesigned again. The western lane was brought up to the oncoming lane. As a result, the central island disappeared, the footpath was widened, and an additional lane was created for those turning right into Bornstrasse. The taxi stop came to the side of the road. The bus terminus was enlarged and relocated to Bundesallee, where a new traffic light switch at the level of Lefèvrestrasse enabled buses to turn around in the street.

In 2011 a bicycle lane was set up on Schloßstraße , which also reaches the square.

The Forum Steglitz was opened in 1970 , one of the first shopping centers in Germany, on the grounds of the Bornmarkt , which has been located here since 1908, between Gutsmuthstrasse and Bornstrasse. In 2007 it was rebuilt and expanded.

The most striking building on the square is the Schloss-Straßen-Center (SSC), opened in 2007 , for which the Hertie department store (built in 1953 as the Held department store ) was completely demolished. The SSC is not located on Schloßstraße , but at the southern end of Bundesallee. Even before construction began, the investor was assured that he would be allowed to use the address Walther-Schreiber-Platz 1 (a house number on Schloßstraße was not possible, as this only begins beyond the district boundary with Forum Steglitz - address: Schloßstraße 1 ). The entrance to the underground station was redesigned, the SSC was given direct access to the underground, and an elevator specially designed for the underground was integrated into the SSC.

At the sharp corner between Bundesallee and Rheinstrasse is the listed building, which until 2006 housed the Ebbinghaus clothing store , which has traditionally always had its headquarters in Friedenau (until 1962 at the corner of Niedstrasse and Lauterstrasse on today's Breslauer Platz ) . In 2007 a new medical center was built in the former Ebbinghaus building, with an organic supermarket on the ground floor. Even after the renovation, this building has retained the characteristic sun visors that are attached to cantilever arms above each floor.