The Mexican Wine has been around since the Spanish arrived in the 16th century. It is mainly limited to the Baja California region .

Viticulture in Mexico and throughout America began with the arrival of the Spanish in the 16th century, who brought vines from Europe to what is now Mexico. In 1699, Charles II of Spain forbade viticulture - with the exception of wine for church purposes. Little wine was produced in the country until Mexico's independence. After independence, wine making for personal use was no longer prohibited and production increased, especially towards the end of the 19th and beginning of the 20th centuries. However, wine production declined due to the Mexican Revolution, especially in the north of the country.

Wine production in Mexico has been increasing in quantity and quality since the 1980s, although foreign wines and 40% taxes on the product make competition in Mexico difficult. Mexicans also tend to prefer beer , tequila and mezcal . However, the interest in Mexican wine, especially in the big cities and tourist regions, has grown steadily in recent years. Many Mexican winemakers have now won international awards for their products. 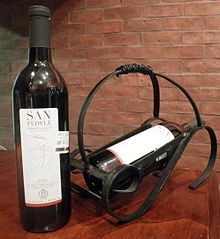 Due to its great north-south expansion, Mexico has different climatic zones. Viticulture is therefore concentrated on wine-growing regions that lie between the 28th and 38th parallel. There are three major wine-growing regions in Mexico; 80% of Mexican wine is made in Baja California. Wine tourism is also promoted there with the annual Fiesta de la Vendimia (Festival of the Grape Harvest) and the Ruta del Vino (Wine Route), which connects over 50 wineries with the port city of Ensenada and the border towns of Tijuana and Tecate . The second wine-growing region is located in the middle of Mexico in the Coahuila region . The "Parras" wine valley is located at an altitude of 1500 m. It is the oldest on the continent and is at the center of Mexican viticulture. Aguascalientes is the third part of Mexico where grape vines are planted.

In addition, wine is grown in the regions of Sonora , Durango , Zacatecas and Querétaro .