The centripetal force is transmitted through the runners.

Without this force, the body would move uniformly in the direction of the instantaneous velocity vector (the tangential vector of the path) according to the law of inertia , as is the case e.g. B. is observed in sparks that come off a grinding wheel.

Deviating from the modern definition given here, centripetal force is often the term for the force with which a fixed center of force attracts the body in older texts. This is known today as the central force .

The term centripetal force is derived from petere ( Latin for strive for, go ). It was introduced as vis centripeta by Isaac Newton . Newton coined the name as a contrast to the centrifugal force previously introduced by Christian Huygens . Newton understood this to mean what is now called central force . This means a difference if the paths are not exactly circular. 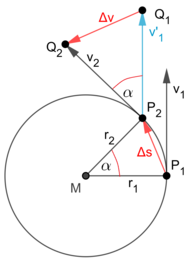 A point moves on a circular path. For the times and the point is in or (snapshots). The speed vectors and illustrate the change in the direction of movement.

If a point moves with constant path speed on a circular path, the speed is directed perpendicular to the radius of the circle at any moment . The adjacent drawing illustrates these relationships for the times and

First of all, the relationships can be viewed purely geometrically: The arrow shown in blue in the sketch is created by parallel displacement of the arrow Its lengths correspond to the length of the arrow The following applies for the lengths of these three arrows:

In addition, the triangles and are similar in the geometric sense, because:

From the similarity of the triangles and it follows:

Multiplied by we get:

Division by the time period gives:

If now sufficiently small is chosen, the following applies:

Then the equation tends towards:

with the curvature of the path. If the circling object is not just a geometric point, but an object with mass , there must be a force that keeps the object on its path. The force must be directed towards the center of the circle and is called "centripetal force". According to Newton's 2nd law, the following applies to the amount of the centripetal force :

This centripetal force acts on every body with the mass that moves with the speed on a path with the local radius of curvature .

For a point that moves on any (smooth) curve in space, there is a clearly defined oscillating ball for every point on the path , so that the path follows the surface of the sphere up to the third spatial derivative. The center of the sphere is the center of curvature. Together with the path tangent, which also indicates the direction of the velocity vector, it determines the current path plane. This intersects the oscillating ball in a great circle , on which the point is in the state of a circular movement around the center of curvature at the observed moment. The axis of this circular movement is at its center perpendicular to the plane of the path. The velocity vector and the vector from the center of curvature to the location of the point under consideration are perpendicular to one another and, together with the angular velocity vector of the circular motion, satisfy the equation

If the point is not accelerated in a tangential direction, the first derivative of vanishes . The acceleration then points to the center of curvature and indicates the centripetal acceleration .

Since the vectors and are perpendicular to each other, the amounts can be used. With the same equation results for the amount of centripetal acceleration as above:

Derivation in the Cartesian coordinate system

First for a uniform circular movement of a point at speed on a circular path with a radius : In an xy coordinate system in the circular plane with the origin in the center of the circle, the point has the coordinates (with a suitable choice of the time zero point and )

Its acceleration is the second derivative

or according to the amount

This derivation uses a specific coordinate system to represent the simplest possible way. The result, however, is an equation between coordinate-independent quantities and is therefore valid in every coordinate system. The derivation is also spatially and temporally local and therefore applies to any curved movement and variable path speed, if the local radius of curvature is used for r and the current path speed for v.

When moving in everyday life, the centripetal force is often transmitted through static friction . With sliding friction, the frictional force is directed against the sliding speed and does not allow a controlled movement. The centripetal acceleration must have the following condition:

with the coefficient of static friction and the acceleration due to gravity . Studies show that a centripetal acceleration of 4 m / s 2 is seldom exceeded when driving a car normally . In the case of a motorcycle, this corresponds to an incline of around 20 degrees. This is still far from the physical limits on a dry road, but it shows that humans are able to adjust their speed so that the product of the driving speed squared and the curvature remains within the specified limits.

For many problems, determining the radius of curvature can be simplified. If the external forces are known, the equation of motion provides acceleration, speed and position of the center of mass. The train, e.g. B. the movement of the center of gravity of a vehicle is viewed in the projection onto a reference surface. In this, the component of the acceleration perpendicular to the velocity is the centripetal acceleration sought. In the simplest case, the reference surface is the xy plane of the inertial reference system.