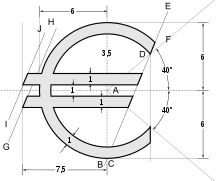 The euro symbol € is the currency symbol of the euro . It was presented to the public on December 12, 1996 and introduced in 1997 by the European Commission of the EC countries as a symbol for a common European currency .

It is said to be based on a study created in 1974 by the former chief graphic artist of the European Community (EC), Arthur Eisenmenger . On the other hand, the European Commission declares that it was developed by a four-person team, not named.

The euro symbol is a large but round E that has two horizontal bars in the middle instead of one, i.e. an E with a horizontal line (or, like a C, combined with an equal sign (=)). It is reminiscent of the Greek letter epsilon ( ) and thus of the ancient origins of Europe. The two straight lines (parallels) symbolize the stability of the euro.

The constructed, static original graphic was soon accepted by the font designers as a new currency symbol (comparable to the symbols for dollar $, naira ₦, pound £, won ₩ and yen ¥), which earned it the status of a font-specific character that formally adapts to the letter forms of a Must subordinate font family .

Representation in computer systems and replacement

The euro currency symbol is represented in the Unicode system by the hexadecimal code U+20AC(in the Unicode block currency symbols ). Even in the older 8-bit family of standards ISO 8859 exist with ISO 8859-15 (ISO Latin-9) and ISO 8859-16 (ISO Latin-10), since 2003 also ISO 8859-7 three (Greek) character encodings 0xA4which represent the euro symbol under the hexadecimal code . The proprietary character encoding Windows-CP-1252 is often used under Microsoft Windows , in which the euro symbol is represented by (hexadecimal). In HTML it can be coded through . 0x80&euro;

On the German standard PC keyboard , the euro symbol is the third assignment on the E key.

If the character cannot be displayed because it is missing in the font or character set used , it should be replaced by the abbreviation EUR or the word Euro . The spellings Eur and EURO are not valid.

Today, however, practically all modern computer systems and fonts are based on Unicode, so that replacement is hardly necessary for technical reasons. Even if the keyboard used does not have the character, it can practically always be inserted using a corresponding function of the operating system or the respective text editor . Only if programs or fonts are used that were created before 1997 and have not been brought up to date can the display be incorrect.