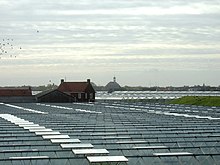 's-Gravenzande is part of the Dutch municipality of Westland . The place is located on the North Sea in the immediate vicinity of the mouth of the Rhine at Hoek van Holland , a few kilometers south of The Hague , and had a population of 21,130 in 2017.

The municipality of Westland was only founded on January 1, 2004 , until then 's-Gravenzande was an independent municipality. Westland is the densely built-up region between The Hague, Rotterdam , the Nieuwe Waterweg estuary and the North Sea, which, with the exception of the living space and traffic routes, is completely built on with greenhouses . The area of ​​the greenhouse cultivation corresponds roughly to that of the city of The Hague, which earned the Westland the nickname "the glass city".

Before the merger, the village of Heenweg was part of 's-Gravenzande, until 1914 also Hoek van Holland , which has since been part of Rotterdam.

The count and later Roman-German rival king Wilhelm von Holland granted 's-Gravenzande town charter in 1246 . Like his father Florens IV , Wilhelm often stayed in 's-Gravenzande. The place owes the first half of its name to the count's court, the second refers to an earlier, then silted-up estuary.

's-Gravenzande was even a place of pilgrimage for a time : Countess Mathilde von Brabant , Frau Florens' and mother Wilhelm, gave the church she had built a picture of the Madonna, which was ascribed miraculous activity.