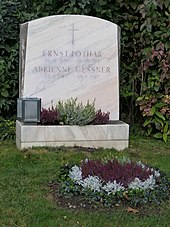 Adrienne Gessner, daughter of the composer and singing teacher Gustav Geiringer (1856–1945) and the actress Christine Geiringer (1867–1937), trained as an actor at the Academy for Music and Performing Arts in Vienna and made her stage debut in 1916 at the Munich Kammerspiele in Das Post office (after Rabindranath Tagore ). This was followed by engagements in Stuttgart and Vienna as well as guest performances at the Salzburg Festival and the Ruhr Festival in Recklinghausen. During National Socialism, she emigrated to America because of her Jewish husband, where she worked on Broadway in New York a. a. played alongside Marlon Brando . Later she was a long-time member of the renowned Vienna Burgtheater.

In addition, she was also active as an actress in film since 1931. She played under the direction of Ernst Marischka in Der Feldherrnhügel (1953), alongside Romy Schneider and Hans Moser in Die Deutschmeister or alongside Lilo Pulver in I think of Piroschka (based on Hugo Hartung ).

Adrienne Gessner was awarded the Max-Reinhardt-Ring for her artistic work and in 1966 the Medal of Honor of the Federal Capital Vienna in silver. She was married to the writer and director Hofrat Ernst Lothar . Her grave of honor and that of her husband is in the Vienna Central Cemetery (group 32 C, number 37). In 2014, Adrienne-Gessner-Gasse was named after her in Vienna- Floridsdorf (21st district) .