Salzburg Stories is a German feature film by Kurt Hoffmann from 1956. The screenplay comes from Erich Kästner , who had already written the book for the film, Der kleine Grenzverkehr . After The Little Border Traffic by Hans Deppe from 1943, Salzburg Stories was the second film adaptation of Erich Kästner's novel.

It is the time of the money freeze in the early 1930s. Anyone wishing to travel from Germany to Austria may not carry and spend more than ten marks a month with them. This is particularly annoying for the city of Salzburg , since it's festival time and tourists from Germany hardly leave any money in the city.

The wealthy academic Georg from Berlin is at first amazed to have to travel to Salzburg with only ten marks in his pocket, but there he meets his good friend Karl, who can lend him money if necessary. One day, however - Georg has long since used up the ten marks - he and Karl are waiting for each other in two different cafés, so that Georg has to ask his attractive table neighbor Konstanze to pay for his coffee. You start a conversation, feel good about each other and meet up for the next day. Konstanze reveals to Georg at the second meeting that she works as a maid at Castle Roitenau near Salzburg, and Georg is delighted. In reality, however, Konstanze is the daughter of Count Leopold, who owns the castle. Since he is a passionate comedian who gets his ideas from observations of the environment, the entire count's family has for some time played the servants of the count, who, it is said, went on vacation and converted his house into a hotel for this time.

When Konstanze and Georg discover in the evening after a trip to the Salzkammergut that Georg's last bus to Reichenhall has already left, Konstanze secretly smuggles him into the castle, where he sleeps in her room. The next day Georg Konstanze asks for her hand and she agrees. However, she cancels an appointment for the evening because she is late on duty. So Georg and Karl go to Don Giovanni , and Konstanze, who is briefly released from her father, goes to a ballet with her brother. During the subsequent visit to the casino , Georg sees Konstanze in robe playing unrecognized and realizes that she has been cheating on him the whole time. The next day brings the debate. As Leopold is desperately looking for a comic conflict for his comedy, Georg, Konstanze and their brother Franz decide to stage it: A new high-ranking guest appears at the castle, falls in love with the maid and both flee together. The masquerade succeeds, but while writing his play, Leopold realizes that in the end it is the father who is the fool and soberly destroys his work. Only his sister Karoline teaches him that Georg and Kostanze must have known each other before. Relieved, he calls the two of them to the castle and agrees to Georg as son-in-law. He now wants to stop writing the play. When an American family, who had been a guest at the hotel for some time, said goodbye, it became clear that they had known all along about the game of the Count's family around Leopold: The Roitenaus family photo was shown in a newspaper report on Austrian castles and their owners . 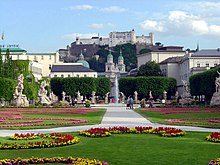 View of the Mirabell Gardens, which can also be seen in the film from this perspective

Salzburg Stories was filmed from August 26th to the beginning of October 1956 in the Bavaria Atelier in Munich-Geiselgasteig. The outdoor photos were taken in Bad Reichenhall , Salzburg and the surrounding area as well as in the Salzkammergut .

Numerous sights of Salzburg can be seen in the film. Georg and Konstanze visit the Mirabell Palace and the Mirabell Gardens with a view of the Hohensalzburg Fortress . The exterior and interior shots of Roitenau Castle took place at the Lederer-Schlössl in Strobl on Lake Wolfgang .

The film contains scenes from Wolfgang Amadeus Mozart's opera Don Giovanni , which was recorded at the Salzburg Festival in 1954. The performance under the musical direction of Wilhelm Furtwängler was released on VHS and in 2001 on DVD. The film also shows a scene from Hugo von Hofmannsthal's play Jedermann with Will Quadflieg as Jedermann and Heidemarie Hatheyer as woo, also as part of the Salzburg Festival. The scene shown is the one in which everyone at the banquet meets death for the first time. Also included in the film is a performance by the New York City Ballet "George Balanchine", who dances Wolfgang Amadeus Mozart's Divertimento .

The German premiere of Salzburg Stories took place on January 25, 1957 in the Lichtburg in Essen .

The FBL awarded the film the title valuable.

Der Spiegel wrote that in the Salzburg Stories , Kurt Hoffmann“tried all the foreign attractions of the Mozart and Festival City to stretch Erich Kästner's weird, but a little asthmatic story […] to the full length.” In the film, “ the charm of Marianne Koch and the gentlemanly demeanor of the tailor idol Paul Hubschmid as well as the public's tendency to be contemplative are equally strained. "

Bachelor's Paradise | Hooray! I am dad! | Quax, the breakage pilot | I entrust you with my wife | Kohlhiesel's daughters | I will carry you on my hands | The lost face | Secret rendezvous | Five under suspicion | The Rabanser case | Taxi kitty | Fanfares of love | Queen of a Night | Climbing Max | Love in the tax office | Music at night | Hocus-pocus | Moselle trip out of lovesickness | The Rape of the Sabine Women | The flying classroom | Fireworks | Three men in the snow | I often think of Piroschka | Today my husband is getting married | Salzburg stories | Confessions of the impostor Felix Krull | The inn in the Spessart | We prodigies | The angel who moved his harp | The beautiful adventure | Stage fright | The haunted castle in the Spessart | The marriage of Mr. Mississippi | Snow White and the Seven Jugglers | Love has to be learned | Gripsholm Castle | The house in Karpfengasse | Dr. med. Job Praetorius | Hocus pocus or: How do I make my husband disappear ...? | Liselotte of the Palatinate | Wonderful times in the Spessart | Rheinsberg | At seven in the morning the world is still in order | One day is more beautiful than the other | The captain