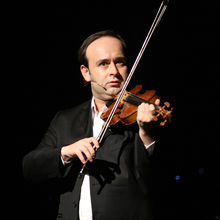 When Aleksey Igudesman was six years old, his family emigrated to Germany. At the age of 12 he was admitted to the Yehudi Menuhin School near London . From 1989 to 1998 he studied violin with Boris Kuschnir at the Vienna Conservatory .

Aleksey Igudesman's musical oeuvre has been published by Universal Edition and includes a broad repertoire of violin duets, violin sonatas and violin teaching schools. In addition to his violin duets for adults such as Klezmer & More , Celtic & More , Latin & More , Asia & More , he published violin schools with the titles Style Workout , The Catscratchbook and Pigs Can Fly .

In 2009 and 2010 Igudesman published his first three violin sonatas, of which he dedicated the second to the violin virtuoso Julian Rachlin and the third to the violinist Viktoria Mullova . In 2009 he won third prize at the Crossover Composition Award with his work Fever of Passion .

In Violins of the World , a joint project by Gidon Kremer , Julian Rachlin , Janine Jansen and Alexandra Soumm , Aleksey Igudesman's violin duets are performed and his poems are performed by Roger Moore .

Aleksey Igudesman has been touring worldwide with his program The Music Critic, in which John Malkovich plays the main role of the music critic, since 2017 .

Aleksey Igudesman has composed and arranged film music for several television and Hollywood film productions. In collaboration with Oscar winner Hans Zimmer , he arranged film music works for the Hollywood productions Der Weg nach El Dorado , Spanglish and most recently for the film Sherlock Holmes , which was nominated for best film music at the 2010 Academy Awards . Aleksey Igudesman has also composed film music for television documentaries such as Maria Theresia - Legacy of a Ruler, Schönbrunn , Wachau and Salzburg by the famous Austrian director Georg Riha . Together with Hans Zimmer, Igudesman wrote the music for the documentary Jealous of the Birds .

The series Du Kunst mich! Conceived and moderated by Aleksey Igudesman ran successfully on ORF . The series was produced by Wega Film .

Aleksey Igudesman is the co-founder of the Music Traveler app , which has been available since 2017. Musicians who are looking for suitable rehearsal rooms can use the app to find a room and rent a rehearsal room.