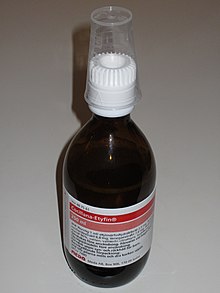 Cough syrup in an amber glass bottle with a measuring cup

An antitussive (from Greek αντί anti "against" and Latin tussire "cough", plural : antitussives ) is a drug which the cough is suppressed ( cough suppressant ). Antitussives are effective orally and are given as drops, juice, capsules, or tablets. They are used for dry, irritating coughs without mucus formation.

Most antitussive drugs are derivatives of opiates . They include:

These substances act via the central nervous system and, in addition to a dampening effect on the cough center in the brain stem, usually also have a sedating effect. The prescription of these substances is partly regulated by the Narcotics Act, as there is a risk of dependency. The extent of this differs considerably between the individual drugs. Papaverine, for example, is practically non-abusive, while the potential for dependence on codeine, dihydrocodeine and hydrocodone is high. Heroin was also originally marketed as an antitussive.

Younger substances such as clobutinol and the somewhat less effective pentoxyverine have no addictive potential with a simultaneous lack of depressant ( sedative ) side effects . For drugs containing clobutinol, the Federal Institute for Drugs ordered the revocation of the approval in June 2008, as in rare cases cardiac arrhythmias can occur. Many manufacturers withdrew their products from the market shortly afterwards.

Other antitussive agents are:

Cough suppressant medication should only be taken for an unproductive, dry, dry cough or before a bronchoscopy . A combination with expectorants ( expectorants ) should be avoided, as otherwise the mucus that is produced will not be coughed up.

Even medicinal plants can relieve a cough. For this purpose, preparations made from mucus drugs are used, for example as an aqueous extract (tea), whereby the mucous substances contained in them protect the inflamed mucous membranes of the respiratory tract and are supposed to have a soothing effect on the cough receptors located there. Medicinal plants pharmaceutically classically used are marshmallow root , lime blossom , mallow , plantain herb , mullein , Iceland moss , thyme (Thymus vulgaris only and thymus zygis) and Pei Pa Koa as Loquat syrup, an herbal remedy the traditional Chinese medicine .